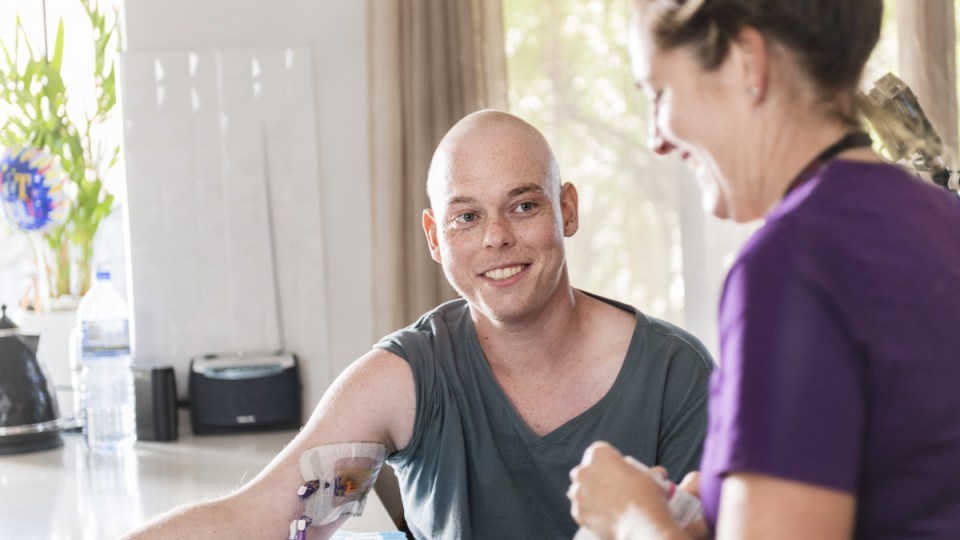 Seven years ago, Lorna Cook and Julie Adams started a business out of Perth called chemo@home, allowing cancer patients – and people with compromised immune systems – to be treated at home by specialty nurses instead of going to hospital.

“When treated at home, they have a 30 per cent less risk of infection,” Ms Cook told The New Daily.

The business has won a dozen awards, and were treating about 500 patients a month nationally – but frustrated that many of the big hospitals wouldn’t allow their patients to access the service.

“For patients to access the service, they had to ask for it,” she said.

‘”But we have this perverse funding system … which underpins why patients have to go to hospital. Some of the big hospitals built these white elephant cancer centres they wanted their patients to attend.”

Then COVID-19 hit and suddenly many cancer patients didn’t want to go to hospital. And the hospitals “weren’t coping”. They were transferring nurses “to train up to work in the ICUs (intensive care units)” in preparation for a flood of virus patients that never came.

“And other staff were stood down,” Ms Cook said.

In a short order, chemo@home were treating 1200 people. “Until COVID came along, there wasn’t the incentive to change. Now a huge demand by consumers has broken down barriers that should have been broken a long time ago,” she said.

When there is no time to waste

Mathew Hall, 34, has had Stage 4 bowel cancer for four years, and, of late, with some liver complications. He no longer talks about prognosis. A doctor said he’d be gone by June 5. That was eight days ago.

Mathew was being treated with chemotherapy at the Freemasons Hospital in Melbourne. He’d been talking to his oncologist about having the treatment at home. But COVID sped up the process. A chemo@home nurse, Nicole Walker, has been visiting him once a fortnight since April.

He says he gets 10 good days and three to four terrible ones.

But he also says his relationship with Nicole has been good for his mental health. He doesn’t have to explain or repeat himself, as he would when going to hospital.

There’s no longer the paperwork that had to be filled in at every visit, no long drive from the suburbs, no parking, no waiting. By the time time he returned home, he was exhausted.

“But it’s the time-wasting that really got to me,” he says. “I don’t want to spend whatever time I’ve got sitting around, waiting for treatment. That was the biggest frustration.

“When you have serious cancer, you’re on the clock. So it’s not an exaggeration to say that getting treatment at home has seriously changed my life.”

Insurers are pushing for more health services at home

In 2016, Medibank began a pilot trial with chemo@home, starting with patients in Perth. The program has been expanded across the country, although largely remains restricted to metropolitan areas. Other companies have followed suit.

Medibank says COVID-19 has prompted a 78 per cent increase in their cancer-patient clients seeking chemotherapy at home. Bupa has reported a 50 percent lift, although that number may be a conservative estimate.

Private health insurers are routinely said to be facing an existential crisis as subscribers – especially young ones – are going into the public system as policy costs continue to rise.

One way of reducing those costs is to get more patient-clients out of the hospital system. At-home rehabilitation after joint surgery, dialysis, palliative care and chemotherapy are now options for customers with certain levels of coverage. There’s a push on to see more mental health patients treated at home, where the quality of their home environment can be assessed and perhaps improved.

The companies don’t like to say how much money they’re saving by providing treatment at home, but industry sources provided the following figures:

Psychiatrist Dr Andrew Wilson is a visiting specialist at St Vincent’s Hospital and a member of the Medibank Group Executive, Head of Health & Strategy.

Dr Wilson told The New Daily that the amount of home health care provided in people’s homes “doesn’t round up to one per cent in Australia … whereas overseas (Western Europe), you see rates up to 10 per cent.”

He said Medibank funded about 1.2 million hospital services a year, and while the “vast majority of those services aren’t appropriate to be provided at home, many of them will be.”

He is hoping for a 10-fold increase in the uptake of home-based care of the services provided in Australian homes.

So why hasn’t it happened?

“There haven’t been the drivers to do it,” he said. “We have a very hospital-centric health system and whilst we’ve been leading the way encouraging the system to change, systems take change slowly.

“One of the issues is you need to set up the infrastructure to provide it. It requires skilled staff … The capacity has to be built.”

Dr Wilson agrees that the COVID-19 crisis is enabling a shift in the health system toward home-based care and shorter stays in hospital. But he notes that tele-health is further supporting the shift, because it will allow specialists, including psychiatrists, to consult with their patients remotely.

What do oncologists think of it?

Professor Michael Boyer is chief clinical officer at Chris O’Brien’s Life House Cancer Centre in Sydney. He said the centre hasn’t been treating people at home to “any great extent … (but) we met with people in October/November last year to decide how we would set it up. And how would we make it work.”

He said COVID-19 might have pushed home-based chemotherapy “a little faster” than it would have otherwise gone.

“But it was clearly on the agenda beforehand,” he said.

“Had it not been on the agenda before, it might not have been able to be implemented as rapidly as it has been.”

Professor Boyer said, “The major benefit, I think, is – for some people, but not all – a benefit of time and convenience and those sorts of things … and there are some cost savings as well, if you don’t have to pay for parking.”

What about costs for treatment?

“Yeah, everybody says that but I think I’m not persuaded yet,” he said. “It depends on what costs you’re counting. It depends who you are.

“If you’re a health insurance company, then you might say, ‘well, it’s cheaper for us, because we’re paying less for the treatment being delivered,’ but that’s because you’re not paying for the infrastructure of the hospital.”

He said that “if everybody was doing this, my guess is you would have problems because in a hospital environment you have one nurse looking after three or four patients at a time, simultaneously, giving chemotherapy.

“In the home environment that’s clearly not the case. It works, only at the moment, I think, because of very careful selection of which chemotherapy you give to people at home. If you’re giving something that takes 20 minutes to give, then it doesn’t tie up a nurse all day.”

Professor Boyer said there were “a whole lot of chemotherapies that take four hours or six hours to give, and you do need someone there monitoring what’s going on during that time. So, clearly, if you tied up one nurse, in one house, looking after one patient for six hours, the economics of it change very dramatically.”

He also noted that there’s a tendency to assume that all chemotherapy and all patients are the same. “And that absolutely is not the case. There are some patients have some more complicated treatment, and having treatment for more advanced disease … and they use the opportunity when they’re coming in for treatment to have other things reviewed at the same time by their oncologist, nurses, other specialists.”

He also said that some patients, “a minority”, prefer to compartmentalise their lives, keeping their treatment away from the home which they see as a sanctuary.

He said he preferred to think in terms of value instead of costs. “If you pay less costs and have the same outcome, then you have better value. The starting point has to be, do you get an equivalent clinical outcome?

“The answer in general, is that chemo given at home isn’t worse than at hospital.”

But he also made the point that clinicians want to drive change. “If there are better ways of doing things, then we need to be open to that possibility.

“But that doesn’t mean you need to immediately swing around that way. But at least it’s worth investigating and seeing the advantages and disadvantages.”