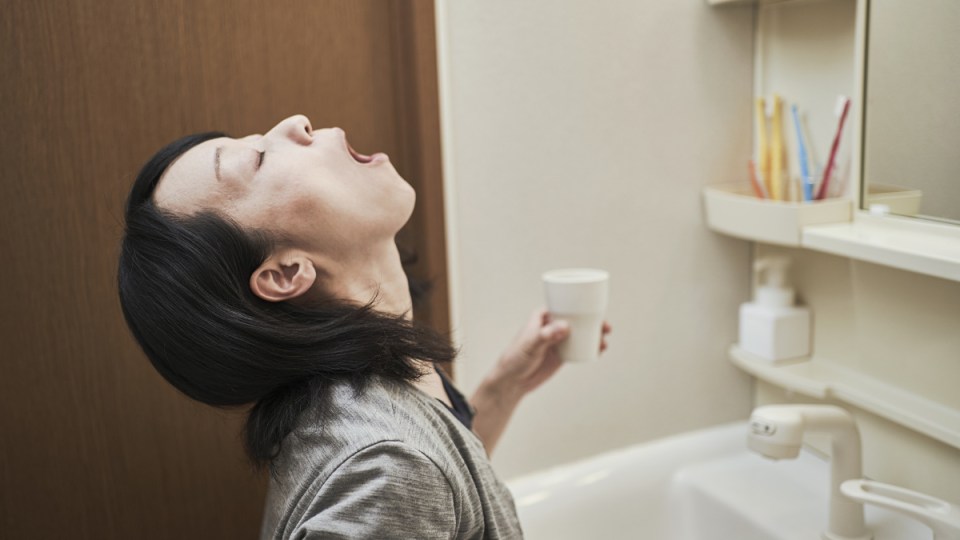 There is some evidence that gargling certain kinds of dental mouthwash might limit viral transmission. Photo: Getty

Is that the sound of yodelers drowning all over the neighbourhood? Sort of. COVID-19 has sparked something of a gargling craze.

From the beginning of the pandemic, a lot has been written about gargling as a possible measure for containing viral spread.

The idea is that gargling might disrupt the envelope that encloses the RNA strand which the coronavirus replicates as it takes over its human host.

The use of warm, salty water lay at the heart of early reports – most of which were either scornful or playfully dismissive of the idea as a wellness myth.

As a trend, of course it started on the internet

This widespread coverage appears to have come off a March report from The New York Times — which observed that the internet was abuzz with coronaviral gargling.

The paper of record advised there was no rigorous evidence that gargling could slow down the plague, or prevent any kind of disease — but also noted that it wouldn’t do you any harm.

It advised that countries like Japan include gargling — along with washing hands, wearing face masks and practicing social distancing — as part of routine governmental hygiene advice for flu season.

Japanese researchers have carried out a number of small studies that appear to support the idea that swishing plain water at the back of your throat reduces the risk of catching upper respiratory tract infections (URTIs).

A 2005 randomised study involved 387 healthy participants — aged 18 to 63 — gargling either water or diluted povidone-iodine (a topical antiseptic) or nothing at all (as a control) three times a day, for 60 days.

About a third of the group developed upper respiratory tract infections. The researchers found that gargling water had a protective effect, and in fact was was significantly more effective than gargling diluted povidone-iodine in reducing the risk of an URTI.

(A URTI can lead to lower respiratory tract infections such as pneumonia, one of COVID-19’s more severe and often deadly symptoms.)

The researchers also noted that gargling water was a cheap prophylactic, concluding:

“This virtually cost-free modality would appreciably benefit the general population.”

And it’s got a great minty taste

UK, US and Spanish researchers, in a new paper, are suggesting that dental mouthwash is the way to go in reducing COVID-19 risk.

“Emerging studies increasingly demonstrate the importance of the throat and salivary glands as sites of virus replication and transmission in early COVID-19 disease.

“SARS-CoV-2 is an enveloped virus, characterised by an outer lipid membrane derived from the host cell from which it buds.

“While, it is highly sensitive to agents that disrupt lipid bio-membranes, there has been no discussion about the potential role of oral rinsing in preventing transmission.”

They also assessed these formulations for their potential ability to disrupt the SARS-CoV-2 lipid envelope, based on their concentrations of these agents, and concluded that “several deserve clinical evaluation.”

They also note that “already published research on other enveloped viruses, including coronaviruses, directly support the idea that oral rinsing should be considered as a potential way to reduce transmission of SARS-CoV-2.”

What does all this mean?

In practical terms not a lot. The paper serves more as an argument as to why dental mouthwash should be investigated, first in the lab, then in clinical trials.

If all goes well, the researchers propose population-based interventions undertaken with available mouthwashes, “with active monitoring of outcome to determine efficacy.”

Finally, they say, “this is an under-researched area of major clinical need.”

For the moment, though, it’s just a promising idea – that literally doesn’t sound so good in practice.

Hard to swallow: Gargling may reduce spread of COVID-19