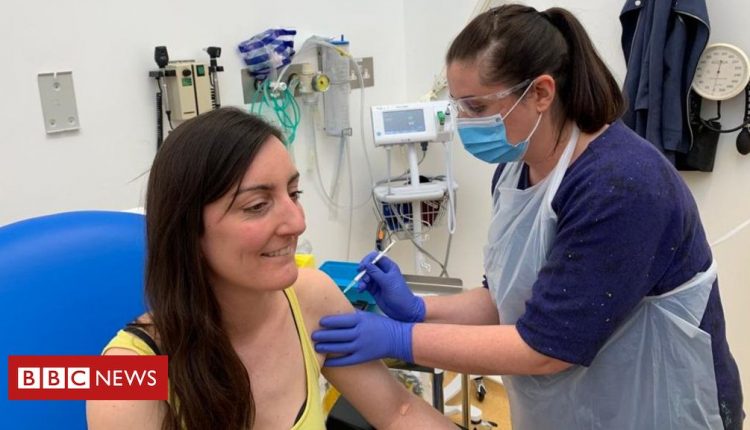 Dr Elisa Granato, an Oxford microbiologist, the first human to trial the new Oxford vaccine. She received her jab on Thursday. Photo: BBC

Oxford University this week began its human trials for a COVID-19 vaccine. Of all the vaccine projects underway, none has been talked up so boldly. The researchers believe they could be delivering a million jabs from September.

It’s not all talk. Those million doses were reportedly already being manufactured, ahead of the vaccine being injected into a human arm.

“We have started at-risk manufacturing of this vaccine not just on a smallish scale… but with a network of manufacturers in as many as seven different places around the world,” Professor Adrian Hill, Director of the Jenner Institute at Oxford University, said last week in an online news briefing.

“The aim is to have at least a million doses by around about September.”

Professor Hill noted that by then, the researchers hoped to have the results of clinical testing, showing the vaccine actually works.

This is where it gets real

On Thursday, those trials began with one person, Dr Elisa Granato, a microbiologist, injected with the vaccine candidate. Dr Granato told the BBC: “I am a scientist, so I preferred to try to support the scientific method anywhere I can.”

A second person was injected with a control vaccine. Both are expected to cause the same mild side effects, of a sort you might get with a flu vaccine.

According to a statement from the university, the initial study, aims to assess whether healthy people can be protected from COVID-19 with this new vaccine called ChAdOx1 nCoV-19.

It will also provide “valuable information on safety aspects of the vaccine and its ability to generate good immune responses against the virus.”

How will the vaccine work?

The short version: Oxford is trialling what’s known as a recombinant vector vaccine. A live replicating virus is engineered to carry genes derived from the SARS-CoV-2 virus. These genes produce proteins against which the researchers hope to generate immunity.

According to the Oxford statement:

The control group designed to experience side effects

The plan was to recruit up to 1102 participants. So far 800 volunteers have signed up.

Half will randomly receive the new vaccine, and a control group will receive the MenACWY vaccine, a licensed vaccine against group A, C, W and Y meningococcus which is given routinely to teenagers in the UK.

It protects against the most common causes of meningitis and sepsis.

Oxford says the reason for using the MenACWY vaccine, rather than a saline control, is because “we expect to see some minor side effects from the ChAdOx1 nCOV-19 vaccine such as a sore arm, headache and fever. Saline does not cause any of these side effects.”

If participants were to receive only this vaccine or a saline control, and went on to develop side effects, they would be aware that they had received the new vaccine.

“It is critical for this study that participants remain blinded to whether or not they have received the vaccine, as, if they knew, this could affect their health behaviour in the community following vaccination, and may lead to a bias in the results of the study,” said Oxford.