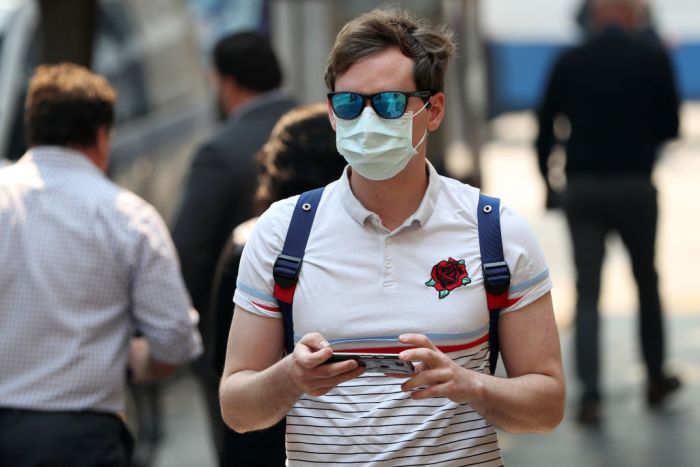 Cloth masks are a popular choice, but they're effectively useless against the particles in bushfire smoke. Photo: Getty

Waking up to a haze of smoke is becoming an eerily familiar sight to people across the country.

This week, Sydney is again blanketed in smog, thanks to the spate of bushfires burning across NSW, and last month the Queensland fire emergency left Brisbane’s air quality worse than Beijing.

Many Australians in outer suburban, regional and rural areas have been contending with bushfire smoke and dust for weeks.

The health effects of poor and hazardous air quality are real, and already being felt.

Bushfire smoke is known to irritate the respiratory system, and contains fine particles that can travel deep into the lungs, causing damage.

While most healthy people can tolerate temporary exposure air pollution (though it may cause itchy eyes and throat irritation), smoke particles can aggravate existing heart and lung conditions – and put vulnerable people at risk.

The best way to avoid breathing in bushfire smoke is to stay inside with windows and doors closed.

But when we step outside, are face masks worth considering? We asked the experts.

Only one type of mask helps

“Face masks are the least useful measure, as a public health response,” said Fay Johnston from the University of Tasmania’s Menzies Institute for Medical Research.

“There’s only one sort that actually helps – that’s the P2 masks.

“They’re the only ones that can filter out a meaningful level of air pollution.”

Respiratory protective equipment – the dust masks and respirators you might see builders or landscapers using – are rated by their level of particle protection.

You can buy them from hardware stores, but they need to fit correctly to be effective.

“They only work with a really airtight seal that you have to maintain. If you’re a man with a beard, it’s impossible. And if air leaks around the sides you might as well not have one,” Dr Johnston said.

While cloth and paper masks can stop aerosols and water droplets – which may in some cases be helpful for preventing the spread of infections – they don’t filter well enough to be of use against the microscopic dust particles that make bushfire smoke dangerous, she said.

“They’re not designed for pollution. They’re are not very effective at removing particles from the air stream … they don’t fit properly around the face. There’s a lot of leakage,” he said.

A British study published last year found the face masks used by residents of Beijing to protect against that city’s high levels of air pollution did very little.

“[Even] a mask with highly efficient particle-filtering material may confer little protection when worn,” the authors wrote, in part because the masks often fit poorly and moved around while they were strapped to someone’s face.

Other ways to protect yourself from bushfire smoke

An air purifier in the home can offer some relief, Dr Johnston said, though shoppers should be careful they’re getting something that works.

“You need to check it’s got a HEPA filter – there’s a lot of things sold as air purifiers that don’t filter particles. You need to check on the box that it’s physically rated to remove particles from the air,” Dr Johnston said.

It’s also a good idea to take advantage of periods of clean air to ventilate your home, as smoke can take some time to disperse unless the house is opened up.

But when air quality is low, staying inside is the most effective protection, Professor Vardoulakis said.

“I think the general message is we need to minimise exposure and there are different ways of doing that,” he said.

“For people who have a pre-existing illness, follow your medical plan, have access to your medication, to your inhaler, and make sure you don’t go out for a jog.”

That advice also applies to healthy people: You should avoid exercising outside when you can see smoke in the air.

Should I wear a face mask to protect myself from bushfire smoke?