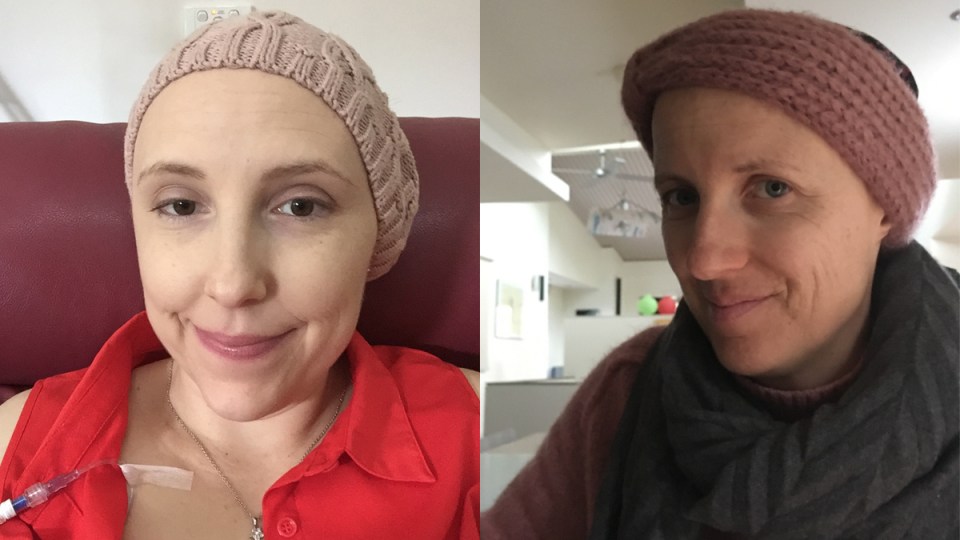 When Miriam Leahy was diagnosed with breast cancer in March, her one comfort was that she’d dutifully paid almost $50,000 in health insurance premiums, and in 12 years had never made a significant claim.

Miriam, of Ocean Grove, Victoria, was confident the financial side of her catastrophe was taken care of.

Indeed she had banked on it: The $369-a-month premium for family cover on a primary school teacher’s salary wasn’t chump change.

“I thought this is the opportunity to claim,” she told The New Daily.

But the reality of the private system was quick to decimate Miriam’s confidence and replace it with rage.

Her “rude awakening” came when Miriam’s health fund, HCF, informed her it would not help pay for any diagnostic tests, including scans.

In fact, the fund can’t be blamed for this: By law, according to health.gov.au, “private health insurance does not offer cover for out-of-hospital medical services” including GP visits, consultations with specialists in their rooms, diagnostic imaging and tests.

And while the government website declares: “Medicare covers these services”, it wasn’t true in the case of PET and MRI breast scans – long a cause of complaint for patients and advocacy groups.

In fact, in March, as Miriam was coming to terms with her pending double mastectomy, the federal government announced that Medicare would offer a rebate on these services – but this didn’t come into effect until November 1.

Between April and October, she paid more than $1400 in specialist fees and close to $200 for heavy-duty pain medication and antibiotics. 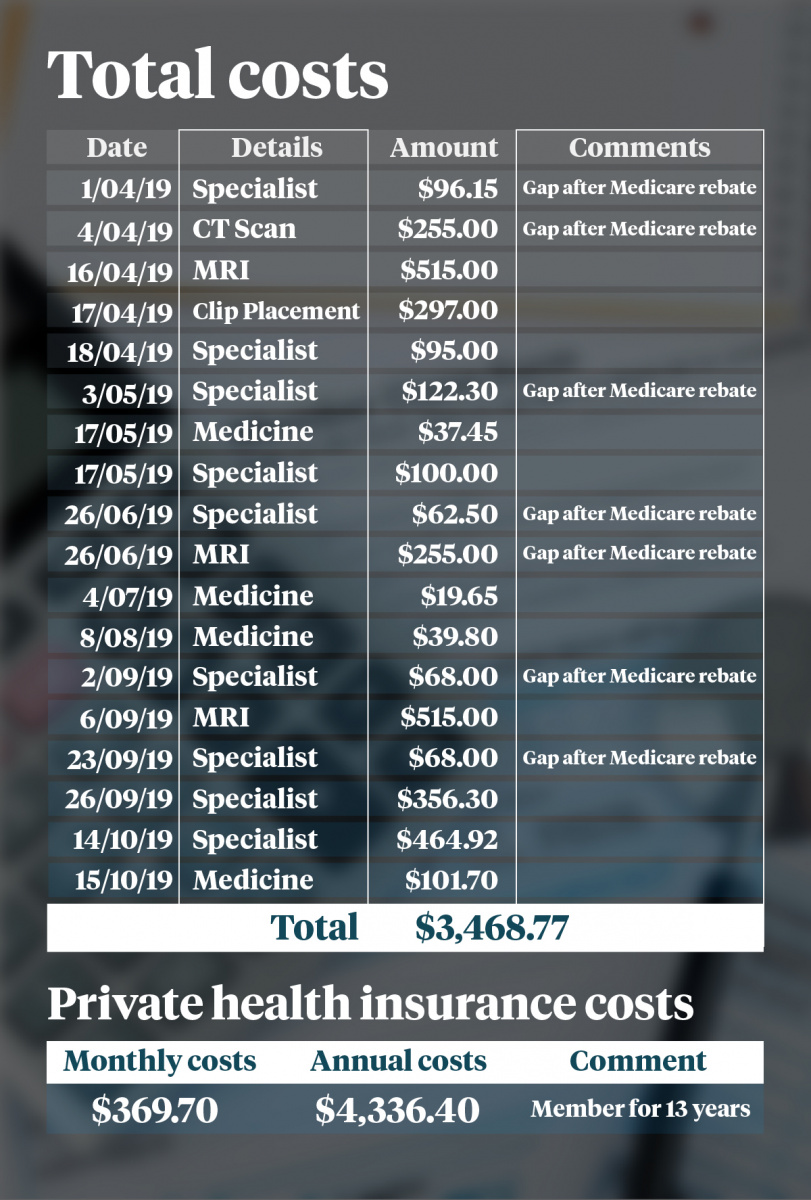 All up, she has paid nearly $3500 in out-of-pocket-costs, saying there is “no economic case for continuing” with her private insurer.

“The policy model upon which private health insurance is built is one that makes it sparkle from the outside, with quotes like ‘all cancer-related treatment is covered’ but is, in fact, a dimly lit unnavigable cave on the inside, filled with road blocks like ‘only covered if you’re an inpatient’,” she said.

“The cost to me and my family financially over the past 12 years of paying for a high form of cover, coupled with all the out-of-pocket costs not covered by them, combined with the emotional cost of the degrading process of virtually begging for them to fill the most straightforward of claims, is a price way too high to pay.”

While the fund covered her double mastectomy and subsequent breast reconstruction, she has become a textbook case of disaffection.

Private patients pay twice as many out of pocket costs

In May, Prime Minister Scott Morrison embarrassed himself by claiming cancer patients in the public system received free treatment.

In reality, Medicare covers about half of all services for people with breast cancer.

Most people – 88 per cent – will have some out-of-pocket costs for their treatment and care.

And patients with private insurance on balance bear a greater share of those out-of-pocket costs.

In 2016, Breast Cancer Network Australia (BCNA) – the highly proactive research, advocacy and education organisation – commissioned Deloitte Access Economics to conduct a survey of its membership about the out-of-pocket costs of their breast cancer treatment and care in the first five years after their cancer diagnosis.

The findings were published in 2017.

The privilege of paying more and more

The majority of women (74 per cent) were privately insured at the time of their diagnosis and were found, on average, to be paying about twice as much in out-of-pocket costs for their breast cancer treatment and care than women without private health insurance – about $7000 for insured women, and about $3600 for uninsured women.

However, some were found to have out-of-pocket costs of more than $21,000.

Breast reconstruction surgery, radiotherapy treatment, breast MRI scans, genomic tests such as Oncotype DX, and genetic testing are some of the biggest expenses.

But other issues can arise that can double a patient’s out-of-pocket expenses.

The government has improved the situation by allowing a Medicare rebate on MRI and PET scans – and there is a review under way by the Medical Services Advisory Committee into possible public funding for the revolutionary genomic test Oncotype DX, which can determine if a patient needs chemotherapy.

According to the BCNA, a recent Australian study found that 24 per cent of women were able to avoid chemotherapy and all its toxicities after having the Oncotype test, which showed the risk that their breast cancer would recur was low.

The potential for saving significant costs and suffering is enormous.

But it’s difficult and expensive to access. For the moment, a Oncotype DX test costs $5000 cash.

BCNA CEO Kirsten Pilatti told The New Daily that new legislation would be required for women to more easily access Oncoptype, which is processed in the US – part of the obstacle to it being afforded a Medicare rebate.

“Some private insurance companies were talking about giving some kind of coverage for Oncotype DX, but nothing has actually happened,” Ms Pilatti said.

How the cost of breast cancer treatments cascades

The story of Sydney social worker Jessica Braude is an illustration of how breast cancer-related costs can blow out catastrophically.

Jessica was 30 years old when she was diagnosed with breast cancer.

She was paying about $55 a fortnight to her insurer, Teachers Health, but had only been a subscriber for about five months.

Before that she had been covered by a different policy which was acknowledged when she signed up with her new insurer and was therefore not subject to a waiting period.

While the health fund paid more than $15,000 to her chemo and hospital costs, she ended up more than $9200 out of pocket for cancer-related treatment. In a subsequent email to The New Daily, Teachers Union said it covered the costs it was “permitted” to pay as per legislation.

She was also left $8800 out of pocket from IVF treatments.

These were  recommended by her breast surgeon, to be started before undergoing chemotherapy.

The concern was that chemotherapy would destroy her eggs and render her infertile.

These were the costs she was able to keep track of

There were also “various appointments with other specialist doctors, my GP, psychologist and other complementary therapies to assist with the side effects”, including acupuncture.

She estimates these sundries left her at least $2000 to $3000 further out of pocket.

Next came her first round of IVF. Because of legislation limiting insurance coverage to in-patient hospital services, Jessica’s IVF treatment wasn’t covered, leaving her with another $1500 out of pocket.

Her lumpectomy, mastectomy and exchange (reconstructive surgery) piled on another $7500 in out-of-pocket costs.

While the health fund covered the cost of her chemotherapy sessions, Jessica was another $900 out of pocket after meeting her oncologist two to four times a week for five months. Again these were outpatients costs which are often a source of contention for insurance subscribers.

The appointments were to see how the chemotherapy was going.

After finishing treatment, she underwent a second round of IVF, which left her just over $7300 out of pocket.

All up, Jessica Braude’s out-of-pocket expenses were well in excess of $20,000 – all of which were paid by her parents.

She regards the situation as “absolutely ridiculous”.

The health fund, she said, “made me feel like I was a problem, that I was burning them. They made me jump through so many hoops to provide evidence of everything.

“You’re already going through realising what it’s like to have cancer and you’ve got to battle everyone on the way, well mostly just the health fund.”