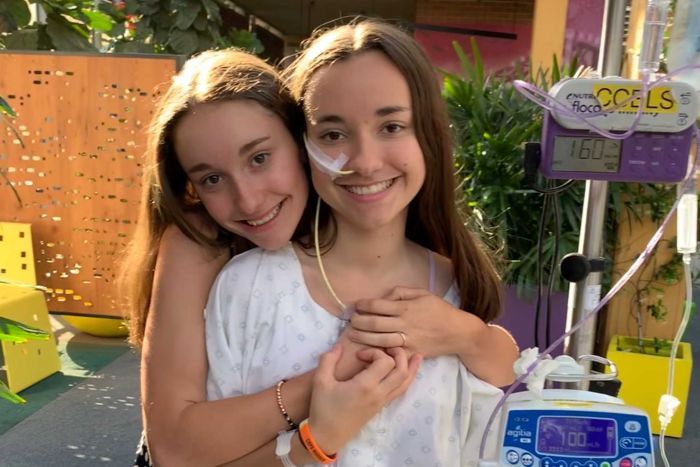 It’s been called “suicide disease” – an excruciating pain syndrome that affects thousands of people – but a radical treatment in the US has helped five young Australians with the condition get their lives back.

She said one of the symptoms was pain so bad it felt “like your veins are on fire”.

Stella will be the sixth Australian patient to fly to the US for treatment after her parents re-mortgaged their house to help pay the $60,000 cost.

CRPS is sometimes misdiagnosed by GPs, because it can often stem from a simple injury to a foot, knee or arm or even routine surgery.

But the pain it creates is disproportionate in severity to the inciting event.

The neurological disorder causes the patient’s central nervous system to “misfire” and the immune system to malfunction in response to tissue damage.

The condition is rated on the internationally renowned “The McGill Pain Index” as worse than childbirth.

In Stella’s case a rolled ankle in a school game of touch football sparked her nightmare.

“My life flipped upside down basically from pain,” she said.

“If I shower or touch my foot it will just flare up, and it will go red and purple and change colour and then [there’s] the temperature and the pain sensation changes as well.

“It feels like someone is drilling through your bone, like you are just on fire all the time.”

Stella said an orthopaedic surgeon said the pain was all in her head, after an X-ray could find no sign of a fracture.

“[It] makes you feel like you are going insane. They are telling you there should not be pain, but there is pain and it won’t go away.

“That is the hardest part, living with an invisible illness.”

Her mother Marita Artuso said she would lie with her daughter while she cried herself to sleep night after night.

“She has been robbed of her childhood, having gone through unbearable pain, unimaginable pain,” Mrs Artuso said.

“She has asked us to stop the pain, begged us to make it stop. She at times has said she does not want to go on. She can’t bear it any longer.”

It was that desperation that drove her parents to a treatment overseas run by the Spero Clinic in Arkansas.

Set up by Dr Katinka van der Merwe, the clinic uses a holistic approach to restore balance to the central nervous system.

The 12-week session includes electrical impulse stimulation of the vagus nerve – an extremely long nerve that travels from the brain stem to the colon and controls inflammation in the body.

“We are reactivating that nerve waking it up and finding it is massively beneficial to these chronic pain patients,” Dr van der Merwe said.

Stella’s local GP Dr Catherine Rodgers said the teenager rated her pain most days at seven out of 10.

“She is in pain all day, every day and it’s day on day, week on week, year on year,” she said.

In the past year she has been treated in hospital five times, and is on a cocktail of medications to mask the pain.

“But in a complex condition like this, to have a facility that does take the holistic approach I think is a great idea.

“And hopefully for Stella’s sake it works well.”

The goal is for Stella to go into remission and be off the plethora of medication she has been taking in order to function.

She has a positive outlook after meeting 13-year-old Romeo Paora, another Queenslander who has just returned home from the treatment “pain free”.

At just nine, Romeo injured his right knee in a game of rugby, sparking excruciating pain.

It took three years before his mum Nicky Paora understood he was suffering from CRPS.

“He was basically dying in front of me,” she said.

Breaking down, she recalled the night he begged her to stop the pain.

“He looked at me and started crying and said ‘If you could get a gun for me’ … he said ‘I can’t take the pain any more’.

“When you have an 11-year-old who just can’t take the pain any more, as the parent you know you have to do everything that you can.”

The clinic promises no guarantee of success, but it has helped all five Australians who have attended to get their lives back.

Romeo is now playing football and water polo at his Sunshine Coast school.

“I have no pain at all, zero. I can do anything now with no pain,” he said.

“I am not sore and life is amazing.”

His mother describes him now as a “normal eye-rolling teenage boy”.

It has given Stella’s parents hope.

“Just that she can live her full life, the life she deserves, she is such a giving soul and so brave and resilient, I know something good awaits her,” Mrs Artuso said.

A fundraising page has been set up to help with the medical costs.

‘Like drilling through bone’: The unbearable and invisible syndrome hurting Australian children