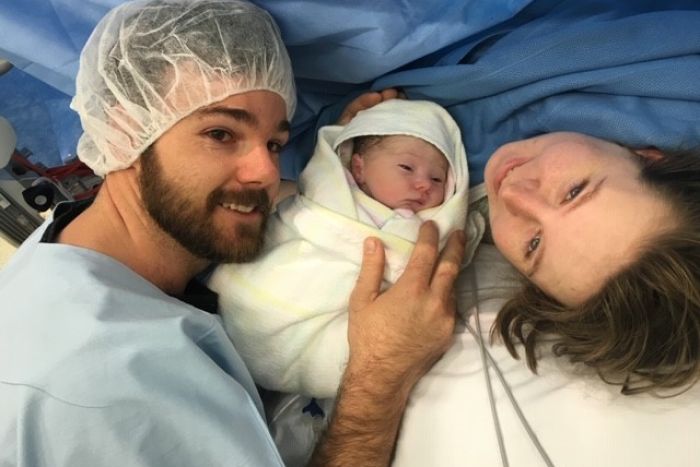 These days, Philip Wright is a happy, healthy two-year-old, but his entry into the world was anything but calm, and the experience still haunts his mother, Jo Wright.

“It was the most terrifying moment of my life,” she said.

“I thought he was going to die.”

What began as a normal labour for the then 24-year-old became a medical emergency when Philip’s heart rate dropped to a dangerously low level.

Doctors told her she needed an emergency caesarean.

“There was no time for anything. They told me straight out my baby was coming out. I was so scared I thought was going to throw up,” Ms Wright said.

Each year, thousands of Australian women need emergency c-section or instrument-assisted deliveries because their babies have become distressed during labour.

Obstetrician Sailesh Kumar, from the Mater Research Institute at the University of Queensland, believes he has a solution.

He found administering Viagra to women in labour could significantly reduce the chance of babies becoming distressed, therefore reducing the need for emergency caesarean.

The theory is sildenafil citrate, the active ingredient in the erectile dysfunction drug, might help.

During contractions, blood flow from mother to baby can drop by up to 60 per cent.

If adequate blood flow is not restored between contractions, the baby may become distressed because it is not receiving enough oxygen.

Drugs like Viagra dilate the pelvic blood vessels, which increases blood flow to the placenta and improves oxygen supply to the baby.

In a pilot trial, doctors gave the drug or a placebo to 300 Australian full-term pregnant women in labour and found the medication:

Sean Seeho, from the Royal Australian and New Zealand College of Obstetricians and Gynaecologists, said one in four emergency caesareans were needed because the baby was in distress.

“So if this does prove to be beneficial and reduce foetal distress in labour, then certainly this would be a very effective way to reduce caesarean sections,” Dr Seeho said.

Larger study on the cards

“If we were able to reduce the burden of this medical problem, we could potentially make a difference to overall perinatal outcomes, not just within Australia, but worldwide as well,” he said.

As a result of his study, he is a finalist for Research Australia’s inaugural Frontiers Research Award, which will be announced tonight and is given to scientists doing innovative research which transcends existing health and medical boundaries.

Professor Kumar and his team now hope to establish a larger study of nearly 8,500 women in labour to test their preliminary findings.

They have applied to the National Health and Medical Research Council for funding to gather more data on how many emergency deliveries can be avoided, and whether using the drug in labour results in better outcomes for the baby.

Babies that suffer foetal distress can experience hypoxia (oxygen deprivation), which is linked to higher rates of brain damage and cerebral palsy, as well as increased admissions to neonatal intensive care units.

“We want to see if women who are on this drug actually have better outcomes for their babies,” Professor Kumar said.

Sildenafil citrate has been used in a previous study in the Netherlands with women whose babies were severely underdeveloped and were considered at risk.

In that study, higher doses of the drug were given to the mothers much earlier in their pregnancy, but the research was abandoned after 11 babies developed lung problems and died.

Professor Kumar said his study had not shown any side effects in mothers or babies, but as a precaution he temporarily halted his trial to get more information about the Dutch study.

He said there were marked differences in the two studies.

“I don’t think that both studies are directly comparable,” Professor Kumar said.

Ms Wright wanted to have as many as five children but re-evaluated that plan after her first birthing experience.

So the chance to avoid another emergency caesarean is a great relief.

“To know that risk could be halved is pretty huge and I would actually like to try for that,” Ms Wright said.