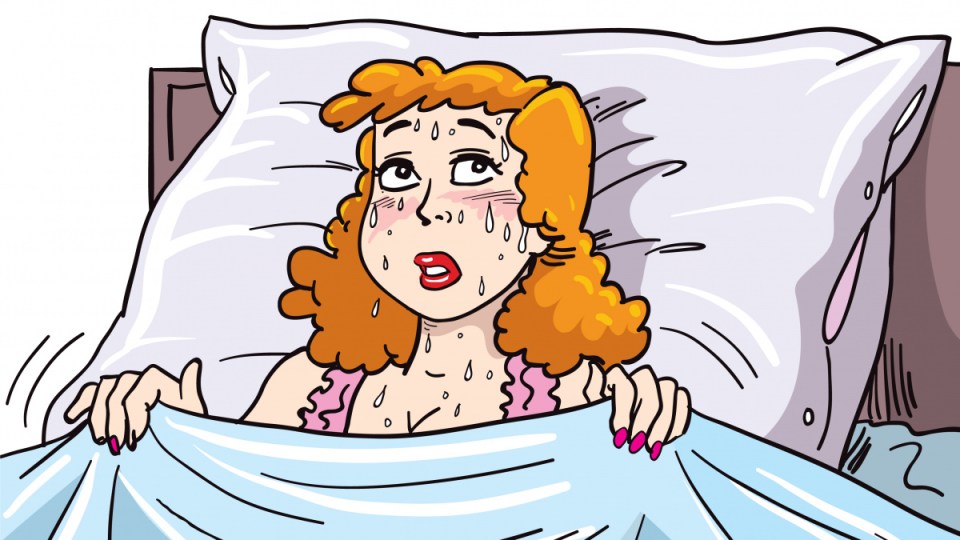 A new study suggests that some menopausal women who experience night sweats will sleep longer overall – and this, in turn, appears to lead to a decline in prefrontal cortex cognitive functions like memory and executive function and otherwise thinking straight.

It’s a complex and paradoxical finding in an area of medicine that is already complicated and not well understood.

But it does add weight to the idea that cognitive difficulties in menopause could be more closely related to other symptoms of the change, rather than their being caused by the underlying hormonal mechanism of menopause that affects every woman sooner or later.

(The average age of menopause is about 52, but it can occur in one’s forties or even earlier).

So what are these symptoms?

When women are transitioning to menopause they can experience what are called vasomotor symptoms: hot flushes and night sweats. They might also report sleeping difficulties.

These symptoms have been associated with periodic working-memory difficulties, forgetfulness and mental tiredness – long described by women as menopausal fog.

But for a long time the idea that menopausal women were grappling with cognitive issues – as a symptom and consequence of their hormonal change in life – was written off as a misdirected huff.

Women take everything personally, right? Everyone in middle age starts to lose their mental sharpness, yes?

Then, it was thought that if there was a menopause-driven cognitive decline, it was solely due to menopause’s characteristic drop in the hormone oestrogen in the brain. But that has proved to be complex and unresolved.

A 2003 University of McGill University (Quebec) paper lays out the problem as it’s pretty much understood today:

Why not just give women oestrogen replacement therapy in that time frame? Problem solved? Maybe not.

A massive study published in the The Lancet in August found that five years of menopausal hormone therapy (MHT) significantly increases breast cancer incidence in women, with excess risk persisting for more than 10 years depending on treatment duration.

According to the paper, five years served as the common treatment period.

So back to symptoms

Early research concluded there was no link between vasomotor symptoms, sleep disturbances and cognitive performance.

But those studies were flawed because they relied on subjective, self-reported data: how many hot flushes, night sweats and sleep disturbances were participants experiencing by their own count?

In 2008, a University of Illinois (Chicago) study found that women transitioning to – or experiencing – menopause were underreporting the number of hot flushes that they experienced by more than 40 percent.

How did they discover this?

By measuring the symptoms objectively and clinically.

The researchers enrolled 29 midlife women with moderate to severe hot flushes in an observational study.

Dr Pauline Maki, a professor of psychiatry and psychology at the University of Illinois, and who led the study, claimed at the time that this was the first study to explore the relationship between objectively measured hot flushes and memory performance.

“In other words, the hot flash-memory relationship is not all in a woman’s head.

“It’s actually a physiological relationship that you can pick up on, if you measure hot flashes objectively with a monitor. The problem is that the physiology of hot flashes and the science of hot flashes is more complex than we previously understood.”

Dr Maki and colleagues also observed a relationship between the total number of hours slept and memory performance the next day.

“So, the two together worsen memory in women the next day.”

The study concluded that if women were treated for their vasomotor symptoms it may improve memory function in women with hot flushes.

This new study, also from the University of Illinois, involved women with a history of breast cancer, however, researchers focused on night sweats and how they relate to total sleep time.

Surprisingly, more frequent night sweats were associated with greater sleep duration – and the longer women slept, the more vulnerable they were to prefrontal cortex deficits, including decreased attention and executive function.

Executive function and self-regulation skills are the mental processes that enable us to plan, focus attention, remember instructions, and juggle multiple tasks successfully.

In other words, it’s complicated.

This story is part of an ongoing series in which The New Daily reports on new research and social complexities associated with menopause, particularly those posed in the workplace.