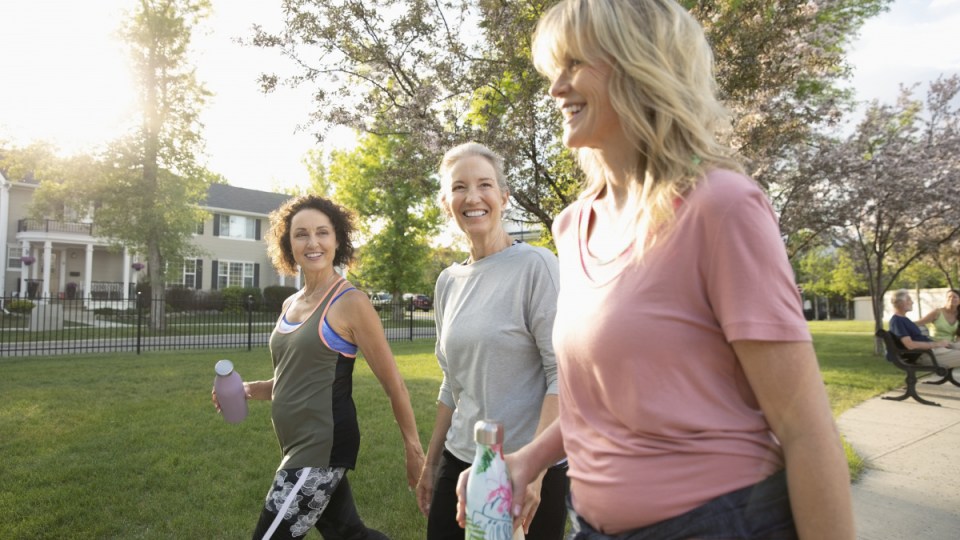 Slower gait in elderly people is a recognised sign of accelerated ageing. Surprisingly, the effect holds true for people in their 40s. Photo: Getty

A slower walking gait at the age of 45 appears to indicate evidence of “accelerated ageing” – including how much your brain has shrunk and your body has declined.

This was the conclusion of a longitudinal study that followed nearly 1000 people in New Zealand – who were born in a single year  (1972-73) – and followed from the age of three until they turned 45.

The study participants had physical tests, brain function tests and brain scans, and during their childhood they had had cognitive tests every couple of years.

According to a statement from the researchers, MRI scans during their last assessment (April this year) showed the slower walkers tended to have “lower total brain volume, lower mean cortical thickness, less brain surface area and higher incidence of white matter hyper-intensities, small lesions associated with small vessel disease of the brain. In short, their brains appeared somewhat older”.

The lungs, teeth and immune systems of the slower walkers in the study were found to be in worse shape than those who walked faster. And their faces were judged to look older.

Already a reliable gauge of brain health in elderly people

Doctors use walking speed as a simple test of overall health, particularly in seniors, because it serves as a reliable indicator of muscle strength, lung function, balance, spine strength and eyesight.

Previous research has found elderly people with slower walking speeds tend to die sooner than those who can manage a brisk pace.

Slower walking speeds in old age have also been linked to a higher risk of dementia and decline.

“But this study covered the period from the preschool years to midlife, and found that a slow walk is a problem sign decades before old age.”

Were the slow walkers destined to age earlier?

Another surprise for the researchers: the cognitive tests taken by the participants when they were children predict who would become the slower walkers.

What should we do with this information?

In an editorial accompanying the publication of the study, Dr Stephanie Studenski, MD, MPH, of the University of Pittsburgh School of Medicine, wonders if clinicians should “screen gait speed as part of health checkups for all adults?”

She noted the rate of ageing in patients was related to a number of  “potentially actionable” physiological measurements including blood pressure, fitness, markers of obesity, hyperlipidemia (levels of cholesterol and triglycerides), glycated hemoglobin (levels of blood sugar), lung function, and dental health.

“Could insurers and practitioners include gait speed and these indicators in their preventive health plans starting much earlier, perhaps even in young adults?” Dr Studenski proffers.

“Certainly, as the authors suggest, midlife adults with slow gait speed are a potential target for interventions to prevent late-life disability and dementia.”

And the answer is…

A simple answer is also the obvious one: get a wriggle on. A 2018 University of Sydney study found walking at an average pace was found to be associated with a 20 per cent risk reduction for all-cause mortality compared with walking at a slow pace.

While walking at a brisk or fast pace (five to seven kilometres per hour) was associated with a risk reduction of 24 per cent.

Meeting a faster pace depends on your fitness, which will improve by getting cracking.

Step on it: Simple test predicts how fast you’re ageing