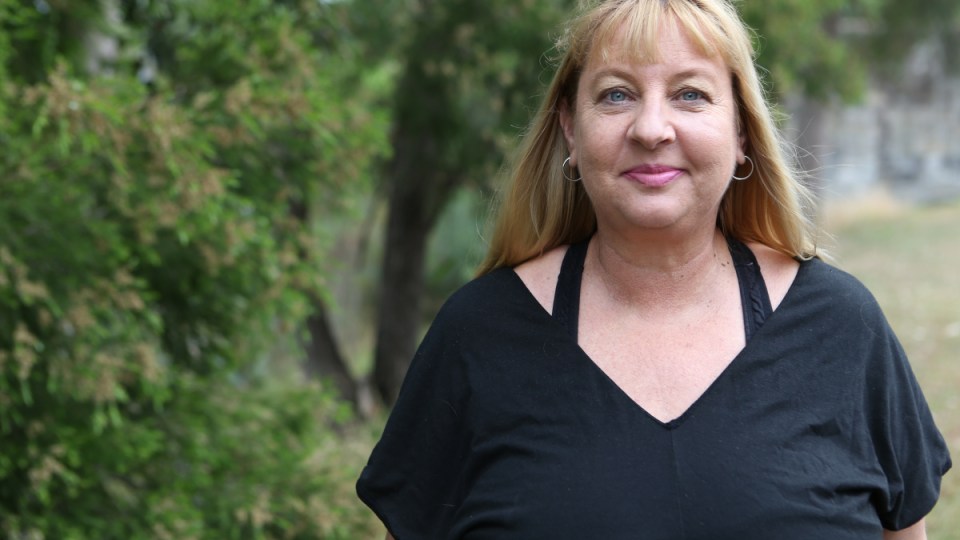 Simone Baran wants to educate people about schizophrenia because it is commonly misunderstood. Photo: One Door Mental Health

All night, every night, for five years Simone Baran sat upright in bed, frozen with fear and listening to distorted voices in her head.

She described it as like having AM and FM radio stations on at the same time.

Ms Baran was diagnosed with schizophrenia at 17, but she refused to accept it. It took five years and a “lightbulb moment” for her to begin treatment.

Misconceptions people have about schizophrenia act as a major barrier to sufferers getting help, said Dr Richard Bostwick, head of intake at Helping Minds.

“It’s about people feeling ashamed … They find it difficult to talk to people about it because they perceive other people won’t understand the things that they’re experiencing,” Dr Bostwick said.

Ms Baran became estranged from her siblings and lost “every single friendship” because no one understood what she was experiencing.

“I was left for dead basically,” Ms Baran said.

Now 51, the recent criminal justice graduate has explained to The New Daily what was going on inside her mind in the hope of educating people about schizophrenia – a psychotic disorder that affects one in 100 Australians.

That was until she drank her first bottle of alcohol and tried an illicit drug at 14.

Little did she know a genetic predisposition to alcohol and drug abuse would drive her to “instant insanity”. She got addicted immediately and was in a drug-induced psychosis at 15.

Then, one night when Ms Baran had finished up a shift at a KFC restaurant and was waiting for her mum to pick her up, two masked robbers jumped out from behind some storage bins and pointed their guns at the 16-year-old and her manager.

They were ordered back inside the KFC and forced to unlock a safe containing several thousand dollars before being bundled into a freezer room.

There they waited until the armed men fled the scene.

Ms Baran went to work the next day, thinking she was okay.

But when she saw someone with a tattoo walk into the KFC, Ms Baran relived the trauma of the night before, recalling the features of the robbers.

That triggered her schizophrenia, Ms Baran said, making it her “last ever shift” there.

“I never went back,” she said. Instead she spiralled into a life of alcohol and drug abuse.

By the time she was 17, her mental state resembled her “83-year-old grandmother with dementia”.

After dropping out of school, her “horrified” mother drove her to a local mental health clinic where Ms Baran was diagnosed with schizophrenia and drug and alcohol addictions.

“I wasn’t ready for help … My mother was told to let go of me completely and when I reached my own rock bottom, I would want to help myself.”

Ms Baran said she “had no coherency” and couldn’t “speak in a way that made sense to anyone”.

She was left untreated for five years, a period when every day was a bad day, she said. So every day, she would drink after work.

Constantly recovering from the side effects of alcohol and in a state of unending paranoia, Ms Baran said “the dog shit on the street looks better than you feel”.

She had insomnia, falling asleep when daylight hit at 5am and waking up at 2pm.

She felt unsafe, always in fear, as if she couldn’t trust anyone, forever worrying someone was trying to kill her and thinking she was under surveillance.

Vehicle number plates were a trigger. She thought their three letters were trying to send her messages, leading her to “get stuck” on trying to make sense of what the letters meant.

“It feels like you’re highly intelligent and you’re a bit of a genius but it feels confusing,” Ms Baran said. “It’s like finding the meaning of life and (yet) you can’t find it and you’re very confused.”

Ms Baran said her father kept guns in the house, another trigger.

“I used to read the newspaper a lot and I had fear that my father might shoot us.

“I felt unsafe and it would trigger. I’d be frozen with fear in my insomnia.”

She admits she “didn’t have basic living skills”, saying she managed a shower and could dress herself but when it came to cooking a meal or going shopping, “I didn’t have the same functioning ability as everybody else”.

Ms Baran managed to find a job in human resources which didn’t last, but experienced a “lightbulb moment” when her employer asked her if she had anywhere else to go.

Her first thought: “I could go back to that mental health clinic my mother took me to when I was 17.”

And so she did.

In that moment, Ms Baran knew “the way I am right now is not quite normal. Something’s not quite right but I don’t know what it is”.

Ms Baran was placed on an anti-psychotic drug called Pimozide, saying it had worked wonders and had no side effects.

She became a personal care worker and massage therapist, checking in with her psychiatrist every six weeks.

“The schizophrenia had gone … I bought my own unit, I had my own car, I lived a functioning life.”

SANE Australia Deputy CEO Dr Michelle Blanchard is shocked and saddened at how little the stigma has changed for people experiencing complex mental health issues such as schizophrenia.

Dr Blanchard said the focus in Australia has largely been on destigmatising depression and anxiety.

“People with mental illnesses like schizophrenia or personality disorder still report really significant experiences of stigma and discrimination,” she said.

She said one of the biggest misconceptions around people with schizophrenia is that they might behave in a way that’s violent or unpredictable.

“People with schizophrenia are no more likely to be violent than anyone else in the community. In fact they’re more often a victim of crime,” Dr Blanchard said.

Another major misconception is that there’s no prospects for recovery – it’s possible with the right care and support.

Ms Baran, a keynote speaker for One Door Mental Health, will be participating in a Wellness Walk in Sydney on October 13 to raise awareness for mental health.

Living with schizophrenia – and beating it: One woman’s story