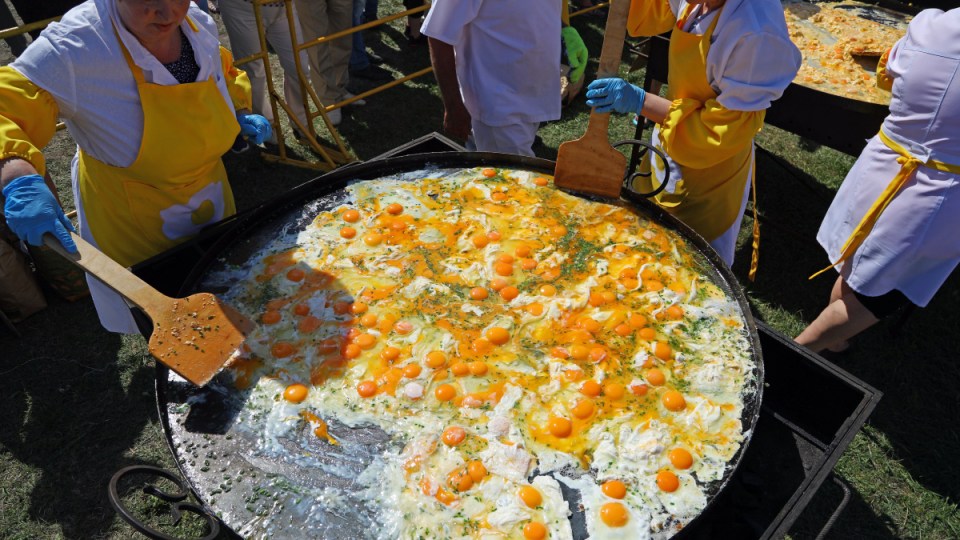 Eating this many eggs for breakfast isn't a good idea in terms of portion control. Otherwise, with half an eye on common sense, go for it. Photo: Getty

Great news from the Heart Foundation: after years of cheese being a guilty pleasure, the foundation has changed its recommendations to say it won’t give you a stroke or heart attack.

Same for full-cream milk and yoghurt, so please feed that vile, thin skimmed stuff to your roses.

And eggs? Have a three-egg omelette every day for the rest of your life if you swing that way. Because eggs, too, have been found to have a neutral effect on your heart health.

The trick is to incorporate eggs, milk and cheese into a heart-healthy diet, which means lots of vegetables, whole grains, legumes, fish and poultry.

The trade-off here is cutting back on red meat, an issue we have repeatedly flagged in the past year.

The new guidelines advise no more than 350 grams of lean red meat a week.

The foundation announcement was made on Wednesday in a muted prepared statement: “Unflavoured full-fat milk, yoghurt and cheese are now an option for healthy Australians, while the limit has lifted on the number of eggs that can be eaten per week in a heart-healthy diet.”

Let’s repeat that: No limit on eggs!

Heart Foundation chief medical adviser, cardiologist Professor Garry Jennings, advised: “We have removed our restriction for healthy Australians on eating full-fat milk, cheese and yoghurt. While the evidence was mixed, this type of dairy was found to have a neutral effect, in that it doesn’t increase or decrease your risks for heart disease or stroke.

“Given this, we believe there is not enough evidence to support a restriction on full-fat milk, yoghurt and cheese for a healthy person, as they also provide healthy nutrients like calcium.”

But the new advice applies to healthy people only.

If you are burdened with high cholesterol or heart disease you should stick with flavoured-challenged reduced-fat milk, yoghurt and cheese – and (not so bad) eating less than seven eggs a week.

Professor Jennings said butter, cream, ice-cream and dairy-based desserts were not recommended as heart-healthy, “as they contain higher fat and sugar levels and less protein”.

He said that evidence found the dairy fat in milk, cheese and yoghurt does not raise bad LDL cholesterol levels as much as butter or other dairy products.

The summary of evidence on eggs can be found here, and dairy here.

Is this the last word on eggs?

The new recommendations have been widely reported, even celebrated, and yet there remains a feeling that this is just the latest opinion – and that sooner or later another study will come along, warning of a looming egg and cheese cardiac apocalypse.

Dr Elena George is an accredited dietitian and lecturer in Nutrition and Dietetics at Deakin University.

Dr George told The New Daily she wasn’t surprised by the new recommendations, because they fall in line with global trends – including the influential EAT-Lancet Commission on Food, Planet, Health, which “brings together more than 30 world-leading scientists from across the globe to reach a scientific consensus that defines a healthy and sustainable diet”.

The commission has recommended full-cream dairy and reduced consumption of red meat in its review published in January.

“I think, really, what (the Heart Foundation) is saying, is we need to focus on having a good balance in our diet – and having enough calcium and protein in your diet – and getting enough dairy is more important than the type of dairy you’re having.”

The evidence came from a review of research papers

The Heart Foundation based its new advice on a systematic review of research papers.

In an email, responding to questions, Professor Jennings said an independent expert advisory group of cardiologists and nutritionists was convened, “which oversaw the process, discussed the evidence and advised the Heart Foundation on a final position for meat, dairy and eggs”.

In their review of dairy foods, researchers systematically reviewed evidence published between 2013 and 2018, supplemented with reviews, trial and meta-analyses from 2009 onwards.

More than 56 studies were examined, which included participants across five continents and more than 21 countries.

Total participants involved in all 13 egg studies was more than one million across a diverse range of countries including Australia, the UK, US, Canada, New Zealand, western and northern Europe and Asia.

The review into meat, commissioned through the Sax Institute, assessed 57 studies published between January 2010 and October 2018 which involved 3,116,896 participants across 15 countries that have populations similar to Australia.

Professor Jennings said the review was fully funded by the Heart Foundation “and no industry or corporate funding or influence was involved”.

Eggs? No limit on how many you can eat: New health advice