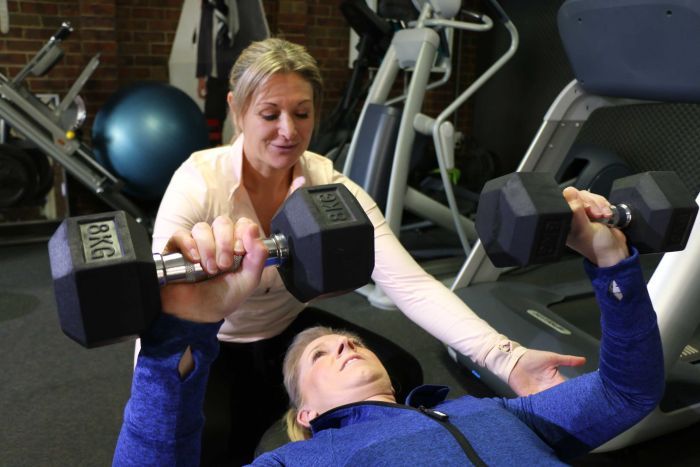 When personal trainer Kylie Willey felt a lump under her breast implants she went straight back to the doctor.

She was assured it was normal, but five months later she was diagnosed with a rare form of lymphoma and needed 18 months of chemotherapy.

“Not one of the [doctors] would even acknowledge that there could be a link between the implants and my diagnosis, even though my diagnosis was so rare,” Ms Willey said.

Now, more than a decade after the first cases of breast implant-associated anaplastic large cell lymphoma (BIA-ALCL), Australia’s regulator the Therapeutic Goods Administration (TGA) has proposed to ban or suspend high-grade textured implants because of their links to the rare cancer.

It will mean plastic surgeons will no longer have access to products that make up about 45 per cent of Australia’s breast implant market.

Conservative estimates suggest more than 100,000 Australian women could be walking around with these implants.

Under the proposal, nine different products made by Allergan, including Natrelle Truform, Soft touch and Inspira, are facing cancellation that would include the recall of all remaining products on the market.

Other products including Adirel Nagor, Emagin, Emergo, Euro Implants, JT medical, and Johnson & Johnson’s siltex products are facing suspensions, which can be revoked if concerns about the products are addressed. If the suspension goes ahead, those products will be recalled from hospital shelves.

“No decision has been made to suspend or cancel the relevant products at this time,” the TGA said in a statement.

“The TGA is required by law to provide the sponsors of affected implants with an opportunity to make submissions in response to proposed regulatory action.

“The TGA will then take into consideration each sponsor’s submission when deciding what, if any, regulatory action should be taken in relation to a particular sponsor’s device.”

Breast implant makers and distributors have until July 24 to respond before the regulator makes a final decision.

It comes after the TGA did its own lab testing and statistical analysis.

The TGA has also imposed a condition on Allergan, Emagin and JT medical that they must provide patients getting certain products with an information leaflet outlining risks and benefits.

Grade three and four implants previously removed from the market for other reasons, but which still carry the increased risk, include Silimed polyurethane implants and Surgitek implants.

In Australia and New Zealand, 90 patients have been identified with BIA-ALCL, including four who have died.

The regulator said women with affected implants did not need to have them removed, but did need to be aware of potential symptoms and see their doctor if they were concerned.

In a statement, Allergan said it continued to stand behind the benefit-risk profile of its breast implants, including it Biocell products.

“The company is actively reviewing the TGA’s proposed regulatory action on Natrelle Biocell textured breast implants and tissue expanders, as well as its invitation to submit a response to the proposed action as a matter of priority,” it said.

“Surgeons need a variety of implant types to address the variable nature of breast anatomy and pathology to meet the needs of individual patients.”

‘They’ve been dragging their heels’: patients

For Ms Willey, the regulator’s decision is a welcome one, but has come too late for her.

She would like to see more speedy and decisive action from the regulator than just a proposal for a ban.

“I think they’ve been dragging their heels,” she said.

“I think it’s been so slow.

“Overseas they seem to be acting a lot quicker.”

Countries such as France, Canada and the Netherlands have already taken action against the Allergan brand of textured implants.

The action came after the ABC and the International Consortium of Investigative Journalists (ICIJ) exposed serious flaws in the international system of medical device regulation.

Ms Willey went through a gruelling 18 months of chemotherapy after her lymphoma diagnosis in 2014.

“I had lots of side effects: I developed a blood clot in my lungs, I had pneumonia and influenza,” she said.

Because her team never connected her cancer to her implants, Ms Willey did not have them removed until last year.

She said she believed her lymphoma was connected to her implants because it was so rare for someone her age, but she has never had an official diagnosis.

“I have a lot of anger towards going through the treatment because I think it could have been avoided,” the mother-of-three said.

“If only one of those doctors had taken a second to investigate my queries, 18 months’ worth of treatment would have been so much different.”

She said she was also concerned plastic surgeons had been continuing to use textured implants despite well-publicised risks relating to their use.

“I’m still having conversations with women in Australia and they don’t know about it,” Ms Willey said.

“There’d have been no way I would have ever had it done if I had have known there was even a slight chance of cancer.”

The remaining products on the market are either smooth implants or low-grade textured implants — the low-grade implants have shallower grooves than high-grade varieties.

The low-grade implants are mainly made by Johnson & Johnson.

Australian surgeons have historically favoured textured implants because of a view they have fewer side effects such as capsular contracture, which is when collagen around the implant shrinks and hardens.

They are also preferred for teardrop-shaped implants, or those used in breast reconstruction after cancer, because the textured surface allows the tissue to grow around the implant and prevents the implant moving.

However, there is limited for evidence for this and it is mainly a surgical preference. In the United States, the majority of surgeons use smooth implants.

The Australian Society of Plastic Surgeons said patients would still be able to choose from a range of smooth implant alternatives.

“The Morrison Government supports access to quality, safe and effective health care and actions from regulators that are in the interest of public health and safety,” he said.