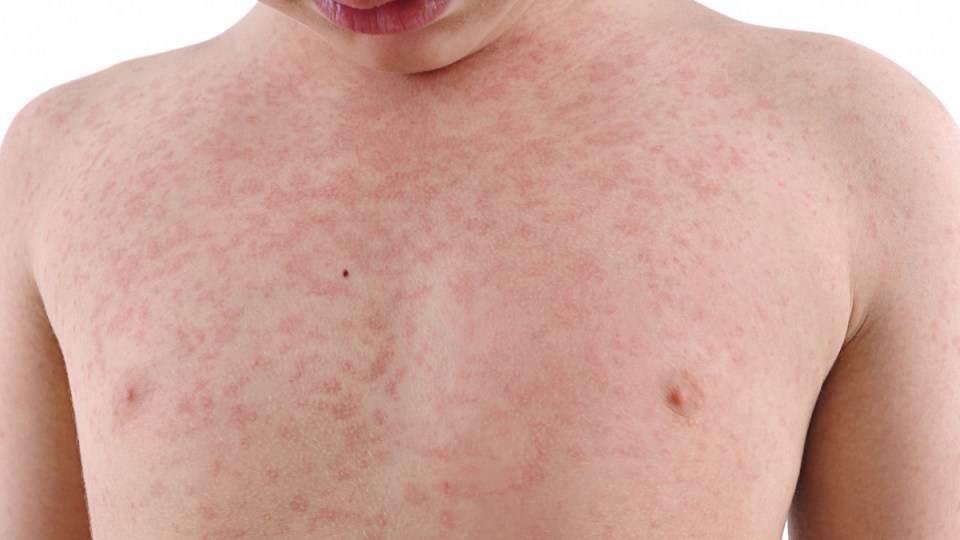 Australians travelling overseas should check they have been vaccinated against measles regardless of their destination as health experts warn the highly contagious disease could take hold here.

“We are really worried it could take hold here,” Dr McAnulty said.

The spate of cases has been caused by unvaccinated travellers bringing it back to Australia and unknowingly spreading the disease, he says.

Even for Australians not travelling to countries already hit by a large outbreak, like the Philippines, there’s a chance of exposure in airports and on planes.

“For example, people travelling to London and stopping off in Dubai are exposed to a mass of people from around the world,” he said.

After being exposed to a person carrying measles it can take up to 10 days to see symptoms, while others can see a rash within just four days.

Despite not showing symptoms people can be infectious soon after exposure, the Health Protection Director said, while reminding people that the best prevention is immunisation.

If you were born between 1966 and 1994 you might not be fully vaccinated against measles! You need 2 doses to be covered, so get a free vaccine from your GP. (It's safe to have another dose). Find out more: https://t.co/hWvUOLNFj0 pic.twitter.com/BBZFESWnqS

It was essential that people find out if they have had two doses of the vaccine and anyone who’s unsure can check on the Australian Immunisation Register, which has records from 1996 onwards.

Anyone unsure if they were immunised before this time can visit the doctor with free vaccinations available for people born in 1966 and after.

For parents travelling with babies, they can receive immunisation at nine months, rather then 12 months, to protect them during their travels.

Health Minister Greg Hunt said 95 per cent of the community needed to be vaccinated to achieve immunity and prevent the spread of the disease.

He said 93.5 per cent of two-year-old children had received two doses of the vaccine making them protected against it.

It comes as NSW Health issued a fresh measles alert on Sunday after two unvaccinated Australians caught the disease while travelling in Asia.

The two travellers, in their 20s, likely acquired the infection while in the Philippines in mid-March and were unwell before landing on the Gold Coast on March 30, NSW Health said.

They visited shops in Pottsville and Cabarita in NSW’s Northern Rivers region on April 2 before seeking medical treatment in Murwillumbah and Tweed Hospital the following day.

Dr McAnulty said anyone concerned they might be infected should report it directly to a doctor rather than potentially infecting others in waiting rooms.

The World Health Organisation website reports so far this year, the Philippines has reported 23,000 cases with 333 deaths – already more than all of last year.

“It is the most contagious human disease, and it’s very good at seeking out and spreading among even small groups of people who are not immune,” Dr Kasai said.