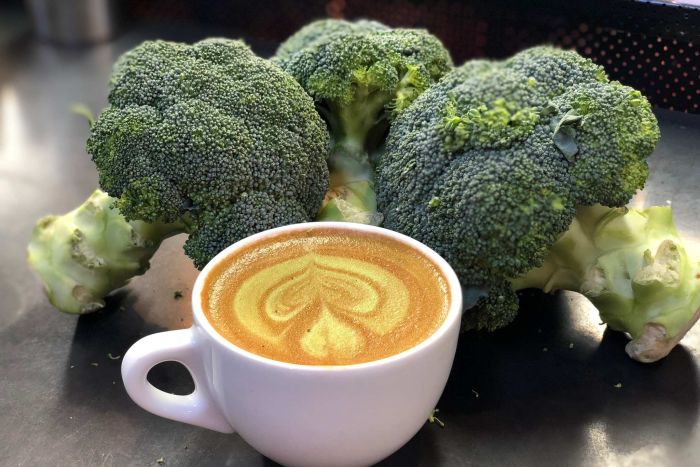 Scientists and agriculture experts have developed a broccoli powder that can be stirred into coffee. Photo: CSIRO

Beetroot, coconut, turmeric and blue algae have all had their turn as the ‘it’ coffee additive, but now the national science agency says its time for broccoli to take centre stage.

CSIRO researchers hope a powdered form of the brassica will not only make its way into your flat white, but also a whole range of snack foods and meals.

Broccoli is recognised as a nutrient-rich vegetable, with plenty of fibre, vitamins A, B1 and B6, potassium, zinc and magnesium, among others.”Two tablespoons of broccoli powder is equivalent to one serve of vegetables,” CSIRO food scientist Maryann Augustin said.

“We made snacks with this and gave it to kids — they loved it, and their parents did too.”

In coffee, broccoli powder is added to the pulled espresso shot, before the steamed milk is added, with more powder sprinkled on top.

Gateway to better health, crop use

With a recipe that divides crowds into the curious and the disgusted, the CSIRO is hoping to address two major problems.

“This powder can be used conveniently and added to a whole host of consumer foods,” Ms Augustin said.

“It makes it easy for consumers to meet the recommended intake for vegetables.”

Powdered vegetables are not new, and health food stores and online retailers sell a wide array of “superfood” sachets.

The CSIRO’s project specifically aims to value-add produce farmers would otherwise be forced to plough back into the soils.

And it is manufactured under rigorous conditions to ensure the nutritional promises are upheld in each batch.

Fresh Select CEO and farmer John Said, who supplied broccoli for the project, told the ABC that if production was scaled up, it could created a high-value use for produce that would ordinarily end up ploughed back into the soil.

“Our crops don’t all grow evenly, so there’s produce left behind after the harvest,” he said.

That produce is normally ploughed back into the field, so turning it into a powder is a value-add for farmers.

“It’s about a 10 to one ratio, 10 kilograms of raw material makes 1 kilogram of product.

“It makes a fantastic broccoli pasta.”