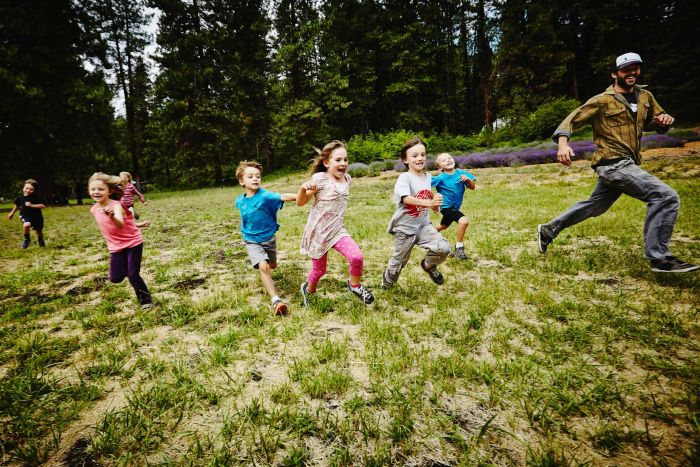 The study also looked at how temperature rises could affect people's ability to work and play outside. Photo: Getty

Ever wondered why kids can run around all day and never seem to get tired? A new study suggests it’s because their muscles resist fatigue in a similar way to those of elite endurance athletes.

The study, published on Tuesday in Frontiers in Physiology, asked young boys, untrained men and endurance athletes to do high intensity exercise, then looked at how quickly their muscles fatigued and recovered.

The researchers quite literally put the participants through their paces, having them perform strenuous activity on a stationary bike.

They found the boys’ muscles didn’t tire easily – even when performing at a similar level to the endurance athletes.

“The picture we get is that, in a high intensity exercise bout, kids fatigue at the same rate as elite athletes,” said researcher Professor Tony Blazevich, from Edith Cowan University.

“They may even recover more quickly than elite athletes … which might be why kids recover so quickly when they do bouts of play or activity.”

Are kids as fit as endurance athletes?

Professor of Health Science at the University of South Australia, Tim Olds, said the study was interesting – but stressed it didn’t mean young children were as fit as endurance athletes.

“What it’s found is the way they recover more resembles endurance athletes, than untrained adults,” said Professor Olds, who is not associated with the study.

In order to understand why kids have such good endurance and recovery, you need to understand how the body makes energy, he said.

“There are two broad ways to generate energy: one is aerobically … the other process is anaerobically.”

“It doesn’t mean that these kids are super fit, it just means that they haven’t yet developed their anaerobic capacity.”

The study also showed the rate at which the boys’ blood cleared lactate was faster than endurance athletes, allowing them to recover quickly.

As well as helping explain why 10-year-old boys seem so indefatigable, Professor Blazevich said the study could be useful in showing where to focus training efforts in young athletes.

“We’ve all noticed this and now we’ve got some evidence as to why,” he said.

“If we want kids to want to participate in sport and activity, we have to understand their systems so we know how best to train them.

What’s more, it’s helpful for families where kids are keen to achieve at a higher level in sport, by helping identify weaknesses to target, Professor Blazevich said.

“It looks like their aerobic fitness is very good, so we might therefore target skill, because they’re usually less skilful, strength, because relatively they tend to be weaker, and their high intensity or sprint ability, because of course they are weaker in that than adults as well. So it allows us to target in youth athletes the areas they need for improvement,” he said.

The study was small, looking at 12 boys aged around 10, 12 untrained male university students and 13 male endurance athletes, which Professor Blazevich said was because of limited access to national-level endurance athletes and ethical constraints around research involving children.

The research is also a step towards better understanding how the risk of developing diseases such as cancer, cardiovascular disease and diabetes increases as we age, according to lead author Associate Professor Sebastien Ratel from Universite Clermont Auvergne.

“With the rise in diseases related to physical inactivity, it is helpful to understand the physiological changes with growth that might contribute to the risk of disease,” he said.

“Our research indicates that aerobic fitness, at least at the muscle level, decreases significantly as children move into adulthood, which is around the time increases in diseases such as diabetes occur.

“It will be interesting in future research to determine whether the muscular changes we have observed are directly related to disease risk. At least, our results might provide motivation for practitioners to maintain muscle fitness as children grow up; it seems that being a child might be healthy for us.”

Children have muscles that perform like those of endurance athletes, study finds