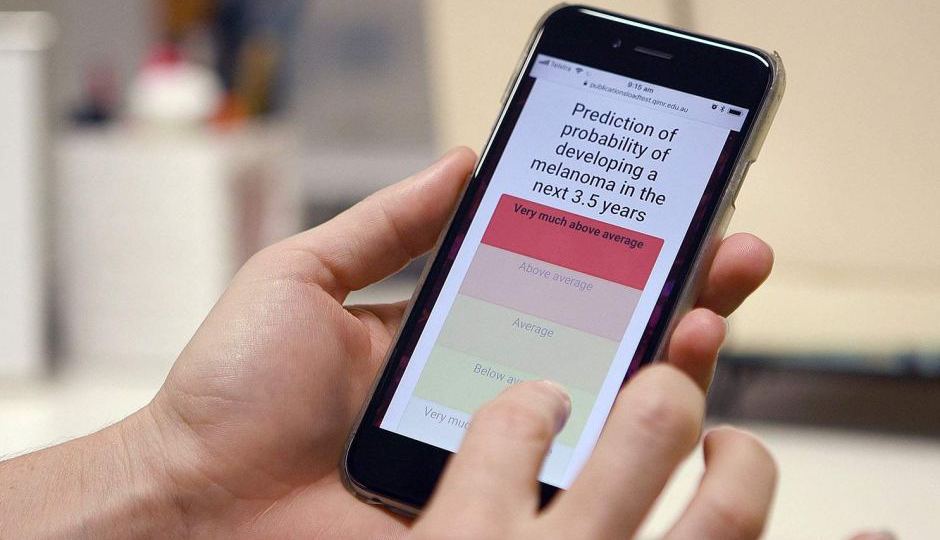 A “highly accurate” online skin cancer test that can identify people at high risk of melanoma in 90 seconds has been developed by Queensland researchers.

The test predicts the likelihood of developing the killer disease over the next 3½ years.

It was developed for people aged 40 to 70, based on data collected from the world’s largest skin cancer study run by the QIMR Berghofer Medical Research Institute.

The tool has just been made available online.

A research paper on the process was published today in the Journal of the National Cancer Institute.

“So this test is the most robust instrument we have ever been able to develop for predicting risk of melanoma,” he said.

“It has proven highly accurate in tests.

“There are seven items on the tool that include your age and sex, ability of your skin to tan, the number of moles you have on your skin your hair colour and sunscreen use.

“The tool is very self-explanatory and easy to use.

“So for instance, reporting the number of moles you have on your skin – there are pictures of people with moles on their skin, so you pick the one closest to you.

“You do not have to have any detailed knowledge at all, they are quite simple questions to answer.”

“Regular screening of those at higher risk may help detect melanomas early and hopefully before they have spread to the lower layers of the skin and other parts of the body,” Professor Whiteman said.

“Importantly in this study, we found that people’s actual risk was quite different to their own assessment.

“This highlights the importance of getting personalised advice on your melanoma risk, because it could well be different to your perceived risk.”

Melanoma is the fourth-most-common cancer in Australia, killing five people every day and there are over 14,000 new cases diagnosed nationally every year.

Lieutenant Colonel Meegan Olding was one of them.

A mother of three, she is based at the Australian Air Force base at Amberley, west of Brisbane.

She said her husband first noticed a mole on her cheek had changed shape last February, so she went to the doctor for a skin check as a precaution.

“To tell you the truth, I was complacent,” she said.

“I just did not think it would be anything to worry about, it did not even cross my mind.”

But within days she was in surgery having a large piece of her cheek removed, from just below her eye to the corner of her mouth.

“I consider myself lucky. I got the results only recently and the margins are clear,” she said.

She said using the online predictor would be a good exercise for anybody in the target group.

“I think awareness is the key. A risk prediction tool could be really useful for helping to make people aware not only of their individual risk, but also give advice on how to manage their risk.”

Professor Whiteman said the tool only provides an “estimate” of future risk and should not be used as a substitute for getting skin checks by a doctor.

Melanoma self-testing could save your life in just 90 seconds, experts say