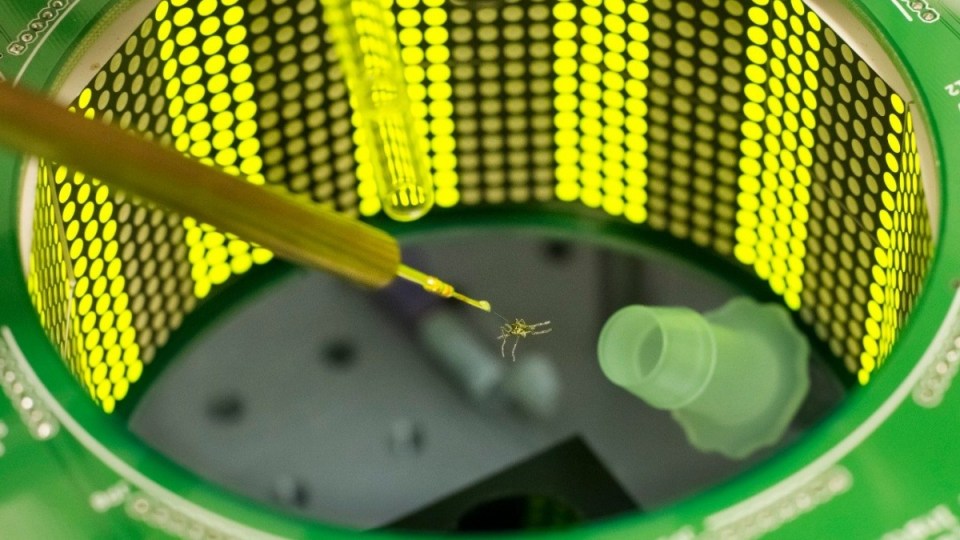 Sick of swatting mosquitoes? Keep at it – mosquitoes get sick of it too. In fact, new research suggests they can be trained to go away.

A Virginia Tech study, published this week in the journal Current Biology, also confirmed the long-held belief that mosquitoes target people – by getting to know them first.

Mosquitoes can identify a person by their complex smell – the vast array of odours in skin, hair and breath – and they can remember that person for at least 24 hours after the initial exposure.

Some people are tastier than others. In effect, human beings are a buffet, and mosquitoes trawl the room looking for something that appeals. Don’t like the egg salad? Go for the chips and dip.

They don’t need to be hit. Just the vibrations of a near-miss travelling up a leg or arm are enough to make feeding time unpleasant enough to move on and find another snack elsewhere.

Professors Vinauger and Lahondère demonstrated that mosquitoes actually learn who makes more troublesome eating by associating specific odours with unpleasant disturbances, and they retain that learning.

They found that dopamine – the neurotransmitter in humans responsible for learning, drive and pleasure responses – was key to the mosquitoes learning to discriminate smells and where they come from.

Curiously, the mosquitoes could be trained to avoid mammals but not birds.

According to a statement from Virginia Tech, test mosquitoes were fitted with “helmets” – helmets! – to record brain activity then placed in an insect flight simulator.

They were exposed to smells from birds and mammals including humans. They were also subjected to little shocks in the air to simulate the ambient response to a slap.

Data from the little helmets revealed that “neural activity in the brain region where olfactory information is processed was modulated by dopamine in such a way that odours were easier to discriminate, and potentially learn, by the mosquitoes”.

The test mosquitoes were then tested 24 hours later in a device called a Y-maze olfactometer – essentially a tube that splits into two directions, each containing a different aroma.

The mosquitoes had to fly upwind then choose between the tasty but slap-happy human body odour (that they’d encountered in phase one) and a control odour.

The mosquitoes avoided the human body odour, suggesting that they had been successfully trained.

“Unfortunately, there is no way of knowing exactly what attracts a mosquito to a particular human – individuals are made up of unique molecular cocktails that include combinations of more than 400 chemicals,” said Professor Lahondère in the statement.

“However, we now know that mosquitoes are able to learn odours emitted by their host and avoid those that were more defensive.”

The researchers said that understanding these mechanisms of mosquito learning and preferences may provide new tools for mosquito control.

And let’s not forget mosquitoes – our deadliest creature – kill a child every 30 seconds via malaria infection.

It may be possible to target mosquitoes’ ability to learn and either impair it or exploit it to human advantage.

Labor victory fires up Tamil family’s hopes of return to their Biloela home
Analyst: Sharemarket will be anxious about a Labor pact with Greens
French foreign minister hails defeat of Morrison and his ‘notorious incompetence’
Tiger Woods quits PGA tournament after the worst round of his career
COVID claims 18 more lives as nationwide daily cases soar above 35,000
Volodymyr Zelensky: How war will end as Ukraine ‘breaks backbone’ of Russian army
Codeine ban: Nurofen Plus, Panadeine and Codral now require GP prescriptions
Today's Stories

Swatting mosquitoes may actually make them buzz off, say scientists