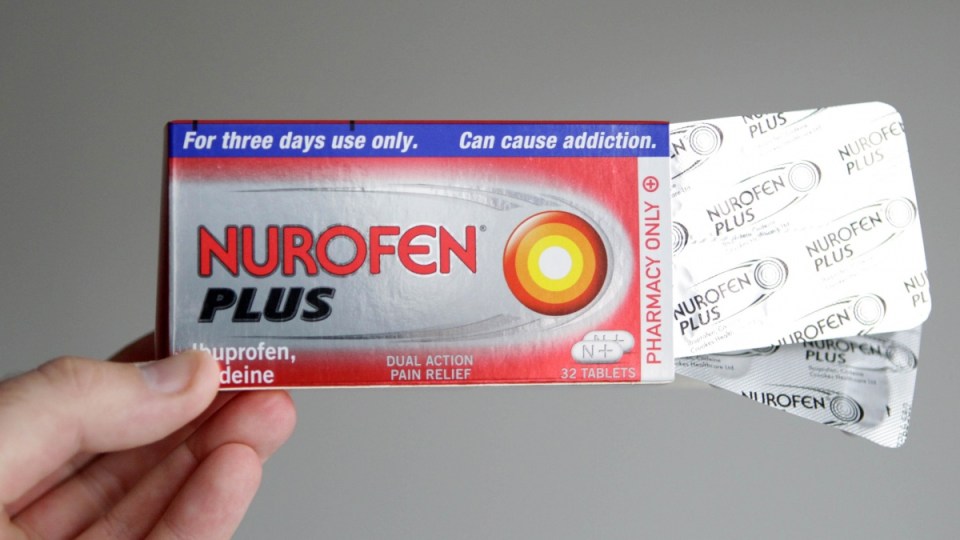 These products will no longer be accessible over-the-counter but there are alternatives. Photo: PA Wire

Over-the-counter medications containing codeine – including painkillers and cough relief tablets – will now require a prescription after the medicinal regulator banned them from pharmacy shelves.

More than 40 low-dose codeine medications which have long been accessible over the counter in Australia, will now need signed approval from a doctor.

These include pharmacy staples such as Nurofen Plus, Panadeine, Panadeine Extra, Panafen Plus, Mersyndol, Codral and Demazin used for treating cough, cold and flu symptoms, period pain and migraines.

The changes are part of a Therapeutic Goods Administration (TGA) decision to regulate public access to the opioid drug in a bid to curb overdoses, drug abuse and addiction.

The move follows the lead of 26 other countries including the United States, Germany and Japan which have banned over-the-counter sales of codeine-combined medications.

A 2017 report released by the National Drug and Alcohol Research Centre showed that the rate of accidental deaths due to opioids had more than doubled among Australians aged 35 to 44 since 2007.

More than two-thirds of the deaths were due to pharmaceutical opioids such as codeine.

Dr Shane Jackson, president of the Pharmaceutical Society of Australia, told The New Daily there are about 100 overdose deaths every year from codeine – both prescription medications and combination over-the-counter drugs.

While most of these codeine-based products will continue to be available, albeit now with a prescription, Panadeine manufacturer GSK confirmed in March that it will scrap its codeine products from the Australian market.

These include Panadeine, Panafen Plus, Panadeine Rapid Soluble and Panadeine Extra.

Alternatives to codeine for pain relief

Dr Jackson said paracetamol, ibuprofen and anti-inflammatory medications, or combinations of these, can serve as alternatives to codeine.

“It’s important that patients know about the changes so there are no shocks when they go to the pharmacy and expect they can access these medications over the counter,” he said.

“There is no doubt some people will be inconvenienced – be it by a time inconvenience, the inability to take time off work or financial implications.”

Dr Jackson also warned that these alternatives may not always be as effective as codeine for everyone.

“I’d say about 20 to 25 per cent of patients might get better relief from codeine-based products,” he said.

“Some people can be allergic to anti-inflammatories and people with certain medical conditions could have side-effects.

“It’s important to talk to your pharmacist or your doctor about your options because it will be different for everyone.”

This decision will ‘save lives’

The Pharmacy Guild of Australia and Pharmaceutical Society of Australia, issued fact sheets to Australian pharmacies to help them advise customers of the changes.

Australian Government chief medical officer Brendon Murphy said the best medical advice and research shows that codeine is “no better for pain” than other over-the-counter medicines.

He said there is “clear evidence” of significant misuse of codeine in Australia with almost half a million people incorrectly using painkillers containing codeine.

“There are numerous studies that show that codeine is not the miracle pain relief drug that people think it is and there is compelling evidence of harm caused by overuse and abuse of over the counter codeine-containing medicines,” Professor Murphy said in a statement.

“This decision is about saving lives.”

Professor Murphy said the decision means codeine-dependent patients will be identified by doctors and treated appropriately.

Dr Jackson said that while he supported the move, he believed the more important discussions centre around pain management – when to use opioids and when to stop using them.

“No doubt people will have been abusing codeine drugs and they may get withdrawals,” he said.

“There is also a fear that the number of people presenting at hospital emergency rooms could increase because they can’t access short-term pain relief quickly.”