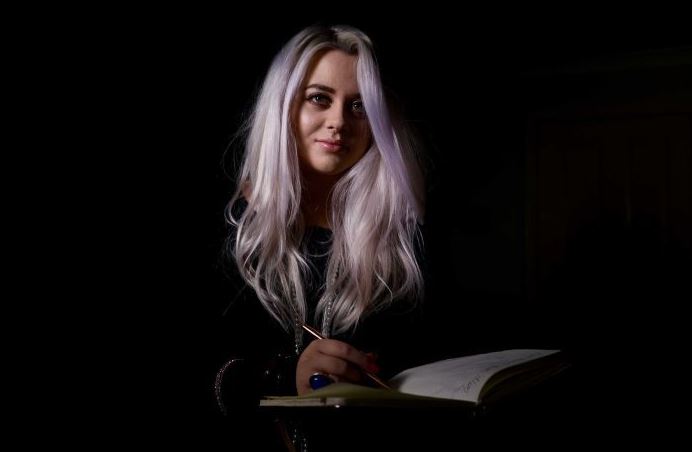 Natalie is determined to end her addiction to fantasy, in part by putting her all-consuming daydreams on paper. Photo: ABC

We all get lost in our daydreams sometimes, but Natalie really gets lost in them.

She is a young woman living in Canberra with an airy voice and heavy eyes.

She is told by friends she reminds them of the absent-minded Luna Lovegood from the Harry Potter novels.

And when she was 13, Natalie started having strange daydreams.

“At the time I loved Good Charlotte,” she said.

“So I would listen to their albums on repeat and have these really intense daydreams — rather than doing anything else, or communicating with other people.”

It was how Natalie survived her childhood.

“My parents divorced and my household was pretty abusive afterwards,” she said.

“I was sexually abused and I had a pretty traumatic time. I definitely just retreated into my head and I’d spend a lot of time in my room.”

It got out of control. Whenever her parents fought, Natalie would hide in her room in a kind of psychosis, laughing along with her dreams for hours at a time. She had dreams of fame, dreams of friends, dreams of fashion.

She knew the dreams were not real, but Natalie was completely immersed.

“You might have a thought, but you’d still be able to bring yourself back. Once I start daydreaming I can’t do that,” she said.

A few years ago Natalie was diagnosed with maladaptive daydreaming disorder, a recently identified strain of dissociative disorder.

“We’re talking about a capacity to daydream so vividly, a capacity for example that I don’t have, that people feel totally immersed,” Professor Somer said.

“And unlike other mental disorders such as schizophrenia — where people have visions, apparitions, hallucinations — in the case of maladaptive daydreaming, people are in complete control over the scenarios.”

Natalie describes it as letting her brain “off its leash” or “going blank”.

“Daydreaming of course is a very normal and prevalent activity,” Professor Somer said. “But when daydreaming becomes compulsive, when it occupies many hours a day, when that creates distress because they are not in control, and when that interferes with their job or with their social life, then we’re talking about a problem.”

A compulsive behaviour, daydreaming makes it hard for Natalie.to work, keep friends and sometimes even eat or shower.

“I don’t have enough control over it … it happens a lot, all the time,” she said.

“It’s like taking drugs, and I’m my own dealer and I’m always going to give myself a little hit of it,” she said.

Natalie was still a child when she first realised her daydreams had spiralled out of control. Her mum had walked into her room one day and seen her daydreaming.

“It looks like I’m make-believing as an adult, or as a teenager, and that’s only really acceptable for little kids. And she was like ‘Who are you talking to in your room?’,” Natalie said.

But even after she began seeing a therapist, Natalie hid her condition. She was ashamed, and for a time self-destructive. But as she tried to quit dreaming altogether, Natalie replaced it with other harmful habits.

She has had years of intensive therapy, but Natalie says she mostly finds ways to treat it herself, as even professionals do not seem to understand.

Next year, Natalie will begin an experimental program with Professor Somer, “like a 12-step program”. Meanwhile, she has started writing and creatively channelling her dreams.
She is still dreaming all the time and says it remains out of control.

But Natalie has conquered her shame and she wants to bring attention to a condition that is little known and poorly understood.