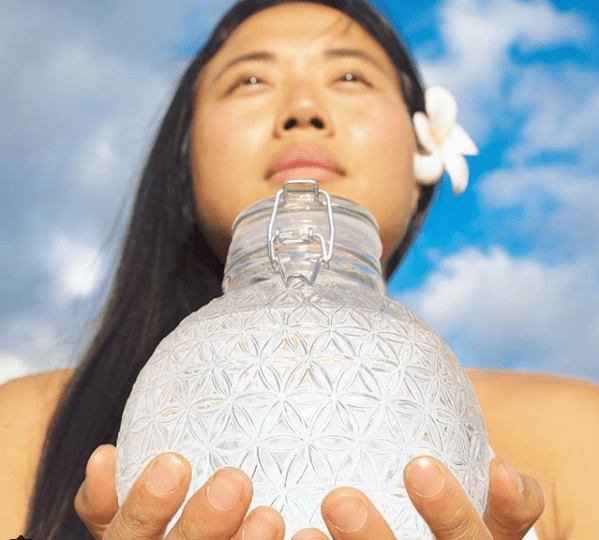 It’s the latest fad after kombucha and golden lattes infused with turmeric.

In wealthy enclaves of California and New York, untreated water start-up companies are taking money from the alternative and ‘health conscious’ community for what’s being marketed as “alive” water.

The New York Times reported the Rainbow Grocery in the hip Mission District of San Francisco was selling 9.5-litre containers of the “spring water from the source” in a glistening re-usable “lead free” glass container for $US36.99 ($47).

Facing rampant demand, the store increased the Live Water’s Fountain of Truth Spring Water – with a ‘slight price increase’ to $US60.99 ($78), according to Business Insider Australia.

The company, which sources its H²0 from the Opal Spring in Madras, Oregon, says its water is “alive” with “healthy micro-flora” and warns its water will become green if exposed to excessive heat and sunlight.

“Chloramine, and on top of that they’re putting in fluoride. Call me a conspiracy theorist, but it’s a mind-control drug that has no benefit to our dental health,” he said.

Department of Health and Human Services spokesman Graeme Walker told The New Daily ‘raw water’ or water from untreated sources such as streams, bores or springs that contain a wide range of disease-causing micro-organisms and harmful chemicals, may pose a serious risk to health.

“The safety of these untreated water sources cannot be guaranteed and therefore people should not drink from these sources,” Mr Walker said.

If purchasing ‘raw water’ is beyond your budget, there’s always the option of finding your local spring and collecting it by the bottle.

“There’s a real satisfaction in knowing that water in your body is wild water,” Find A Spring spokesperson says in a YouTube video while taking a gulp of water surrounded by leaves and debris in the forest.

“Water from a spring is the cleanest water in the world and has been filtered by the earth’s substrate and accumulates in deep aquifers,” the video claims.

Belgrave resident Sophie Cauchin told The New Daily she used to collect 110 litres of water a fortnight from a natural spring in Warburton, in Melbourne’s east, over a period of six years.

Ms Cauchin said she preferred the “fresh” taste of the spring water to treated tap water that tasted of chlorine.

But when her family experienced upset stomachs, and became tired of carting water for many years, she decided to opt for a water filter that filters and “re-mineralises” tap water.

She said her family still had gut issues even after they stopped drinking the spring water, and didn’t know if the water was the cause of their bellyaches.

Melbourne Water catchment and water quality manger Dr Kirsten Shelly said Melbourne had some of the world’s best drinking water, which was treated and tested to ensure it was reliable and safe to drink.

“The water sourced from protected catchments is all disinfected with chlorine,” Dr Shelly said.

She said chlorine ensured any bacterial contamination from animals within the catchment was treated, and prevented potential re-contamination within the distribution network.

Water from protected catchments is also dosed with fluoride to help prevent tooth decay as a legal requirement under the Fluoridation Act, Dr Shelly said.

A National Health and Medical Research Council (NHMRC) spokesperson told The New Daily the greatest risk to drinking ‘raw water’ was the presence of pathogenic micro-organisms.

The Australian Drinking Water Guidelines state the most common drinking contamination is by human or animal excreta carrying ‘enteric diseases’, or gut diseases.

Other ‘nasties’ in untreated water can include pathogenic organisms including bacteria and viruses that can cause mild gastroenteritis to severe and sometimes fatal diarrhoea, dysentery, cholera or typhoid fever.

“Drinking such contaminated water or using it in food preparation may cause new cases of infection,” the NHMRC spokesperson said.

‘Raw water’: The latest health craze for the wealthy