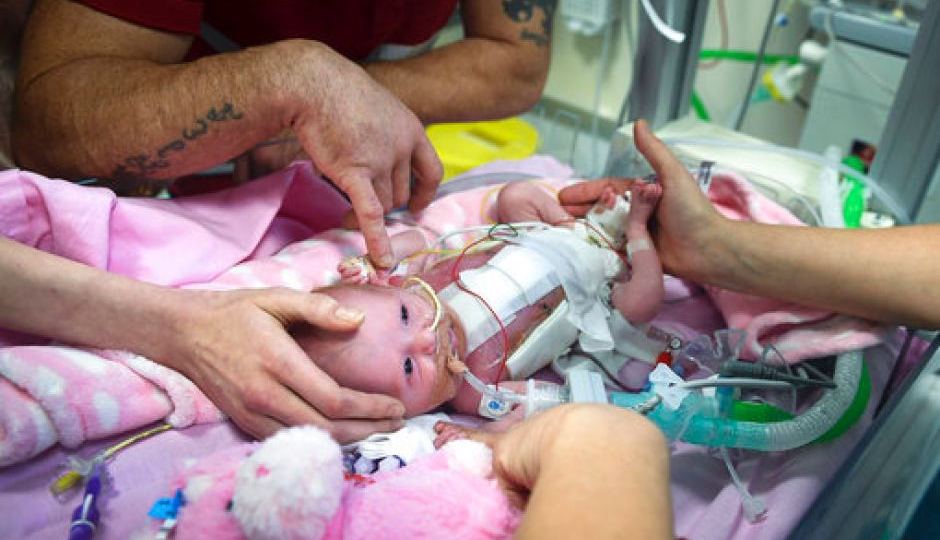 Vanellope's skin was used to cover the hole in her chest. Photo: AP

British doctors say a baby born with an extremely rare condition has survived three surgeries to place her heart inside her chest.

Glenfield Hospital in Leicester revealed that baby Vanellope Hope Wilkins was born in late November with her heart growing on the outside of her body.

The unusual condition is called ectopia cordis, with her heart and part of her stomach growing externally.

Her parents, Naomi Findlay, 31, and Dean Wilkins, 43 were advised at a scan nine weeks into the pregnancy that “termination” was their only option, as experts insisted no baby in the UK had survived such a condition.

Babies born with the condition – estimated at five to eight cases per one million live births – have less than a 10 per cent chance of survival.

“All the way through, it was, ‘The chances of survival are next to none. The only option is to terminate. We can offer counselling’, and things like that,” Ms Findlay told The Leicester Mercury newspaper.

“In the end, I just said that termination is not an option for me.

“If it was to happen naturally then so be it.”

Vanellope has since undergone three intricate operations carried out by a team of 50 staff at Glenfield Hospital, with the first taking place just 50 minutes after she was born.

Vanellope’s parents named their daughter after a character in the film Wreck-it Ralph.

“Vanellope in the film is so stubborn and she turns into a princess at the end, so it was so fitting,” Ms Findlay said.

“Before she was born things looked very bleak, but now they are quite a lot better. Vanellope is doing really well and has proved very resilient,” Dr Bu’Lock said.

“In the future we may be able to put in some internal bony protection for her heart perhaps using 3D printing or something organic that would grow with her.”

Baby ‘doing well’ after doctors put heart back in her chest