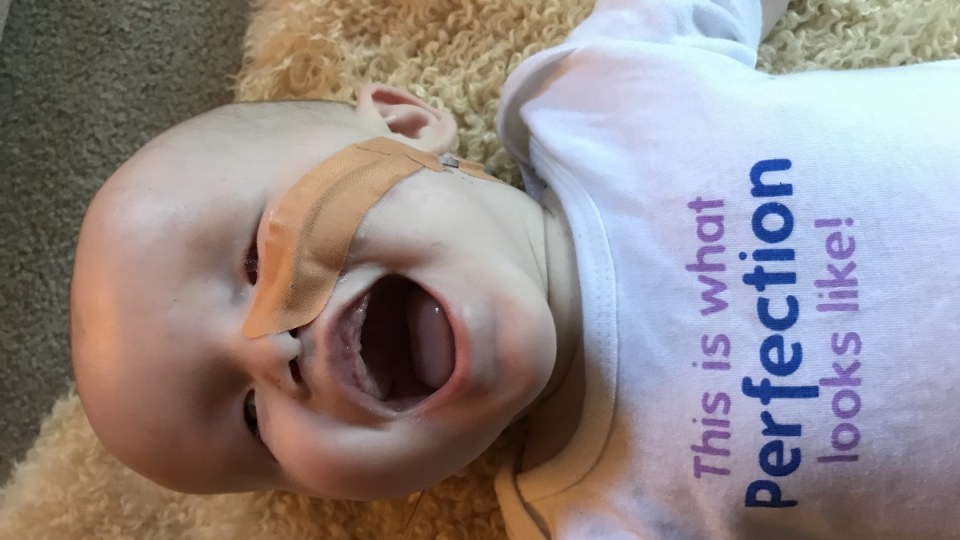 "He is totally perfect. This is the way he was supposed to be," says Fiona Gould of her son, Archie Innes. Photo: Fiona Gould

The first sign something was wrong with Fiona Gould’s second baby was when he seemed too big. A 28-week MRI scan was ordered for the Sydney teacher.

“I did the scan and went home, then they phoned to say, ‘You need to come back, there’s something wrong with your baby’,” Ms Gould, 40, tells The New Daily.

“That’s when we found out our baby was going to be born with no eyes.”

“When you look at him in the newborn pictures, his body is perfect. But we knew he couldn’t see us.

“I can understand people’s reactions when they see him, but once he’s in your arms, he’s yours and you wouldn’t give him back.”

Little Archie was diagnosed with anopthalmia, which means he was born without eyes or ocular tissue. He is black blind, so has no light perception at all.

After showing other symptoms, he was also diagnosed with SOX2 Syndrome, a condition which affects about one in 250,000 births.

“His specific mutation is so rare there is only one other recorded case in the world,” says Ms Gould, who migrated from Scotland in July 2013.

Archie has hearing impairment, several brain abnormalities, silent aspiration that requires him to be tube fed and a severe motor delay that leaves him struggling to hold up his head.

“I did a lot of my grieving before he was born, so I got to it pretty quickly afterwards,” says Ms Gould, who has worked with children with additional support needs but “faced a steep learning curve” with her own visually-impaired son.

“I had to become the advocate.”

She sourced a team of specialists to be at the birth, and contacted Guide Dogs NSW and Vision Australia. “They reassured me there was lots we could do, that blind children just learn in a different way,” she says.

Now a month away from his first birthday, Archie is a “persistent, very resilient, very social” baby who sleeps well, and loves being talked to by his mother, father Stevie Innes, 48, a social care manager, and big sister Alba, 3.

He learns spatial awareness in a special play space lined with a board to amplify sound and hung with noisy objects for him to discover.

“We put beads on his feet so when he moved them he knew he had feet,” Ms Gould says. “Now he can turn a vibrating toy on and off with his feet.

“A lot of black blind children are very still, but in this space he moves like crazy. He feels safe.”

Archie’s days are a succession of cues: a pat on the bottom signals a nappy change, songs are sung before he’s lifted up or fed, he’s tucked in at 7pm with Twinkle, Twinkle. He sleeps with a sound machine making white noise to differentiate between night and day.

“It was just learning ways to communicate,” Ms Gould says.

Archie has physiotherapy and occupational and speech therapy from specialist organisations and his parents do extra therapy sessions daily. Food is being slowly introduced from a finger to overcome the oral aversion caused by his feeding tube.

“He’s never been wrapped in cotton wool. He’s not startled by loud sounds and loves being tipped upside down and swung. The way I see it, he’s just a slow starter.”

Archie recently got his first painted conformer, similar to a prosthetic eye. He is awaiting surgery to make space in the second eye orbit to fit a prosthesis.

Before 2020, the family hopes to travel to America to meet ophthalmologists and the geneticist who first described SOX2 Syndrome, and investigate research into ‘bionic’ eyes which may allow in future for a device plugged into the back of Archie’s brain help him see images.

They have fundraised over $50,000 via a GoFundMe page for the trip plus equipment and physiotherapy for Archie at home, but hope to crack $100,000.

“He’s changed my life for the better. I’ve learned more than I have ever, and he’s been a total blessing,” Ms Gould says.

“Love truly is blind. We go around worried about the way we look and the best cars and houses and all of that doesn’t matter. It’s about who surrounds you and loves you.”

‘When he’s in your arms, he’s yours’: Archie, the little Sydney boy born with no eyes