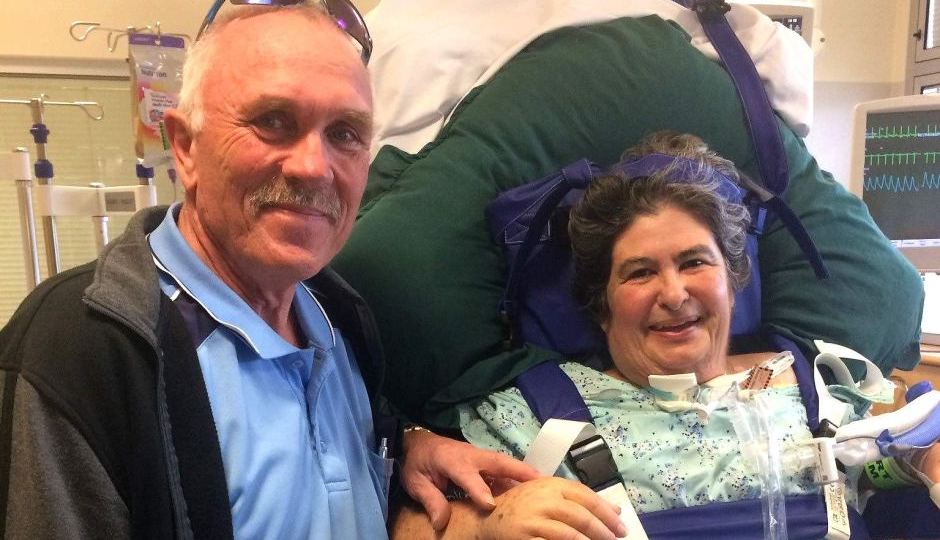 David and Mandy Illman during the long process of her recovery. Photo: Supplied/ABC

Imagine being paralysed, watching a nightmare play over and over again before your eyes, without being able to tell anyone the horrors you’re experiencing.

That’s what happened to 60-year-old South Australian grandmother Mandy Illman, who was suddenly struck down in April this year by a rare condition called Guillain-Barré syndrome, which causes the body to attack its own nervous system.

“I was fine one day. The next day I fell over and I went to the hospital,” she told the ABC.

At first, Ms Illman was unable to move a muscle in her body and could only move her eyes up and down.

“There was like a ghost in my room and things like that, and he wasn’t a nice ghost,” she said.

“Some nights, you’d wake up and you’d feel like you’re being choked, and the ghost was in my room and it took weeks and weeks before I came out of that nightmare.”

It began an extraordinary journey that took Ms Illman and her family through their darkest moments.

There is no cure or known cause for Guillain-Barré syndrome, but it has been documented that most sufferers first have a viral or bacterial infection, or food poisoning, before becoming paralysed.

Husband keeps vigil by wife’s side

With her husband David by her hospital bed every day and a dedicated team of Intensive Care Unit (ICU) nurses who made sure she didn’t give up, Ms Illman made it through the worst few months of her life.

“We had some pretty tough times as far as trying to handle her side of it mentally, because when you’re in the situation she was in, you get a lot of negative thoughts,” Mr Illman said.

“It was trying to get the negatives into a positive, and trying to make her see that there was a light at the end of the tunnel.”

This included bringing familiar things into the room to try to make it a little more like home.

“[The staff] kept me calm and if I needed anything they would be there and they gave me a lot of support.”

The dedicated team caring for Ms Illman implemented an active routine and brought in special equipment, including a MOTOmed to pedal her feet while she lay on the bed and a tilt table to move her into a standing position.

With a collage of photos of her sons and grandchildren in her room, Ms Illman found the courage to go on.

“The wall was covered and the nurses bought me these big balloons they had in my room and they put up a banner, ‘Mandy’s pad’,” Ms Illman said.

“They reckon it was the most colourful room in ICU.”

Emotional reunion between staff and patient

Several long months after her admission, Ms Illman began to recover, first with a twitch in her arm, then slowly she regained control of her body.

Later, she regained her voice and her first words, which were recorded by a nurse, were, “I love you, David”.

Now, Ms Illman has achieved another little miracle by walking back into the ICU ward on her own two feet.

She was greeted with a round of applause by the nursing staff and doctors who embraced her during the emotional reunion.

“It’s really exciting to see Mandy, it really is, because Mandy spent so much time with us, and just to see her up and independent, walking on her own like that, is just amazing for us as an ICU,” Ms Pannell said.

She said the unit realised early that Ms Illman would be a long-term patient and worked hard to ensure consistency of care.

There is ‘hope’ for sufferers to get better

Ms Illman said she wanted to tell her story to help others find hope in their darkest moments.

“I hope what I’ve done talking to you helps people to understand that if they get Guillain-Barré syndrome there is a hope to get better and people might understand it more,” she said.

“I’d never heard of it until I got it, and I just hope it helps other people to understand.”

Ms Illman now has a comprehensive rehabilitation program in place, and she has set herself a goal to become fit and well enough to travel to Melbourne to see her grandchildren.