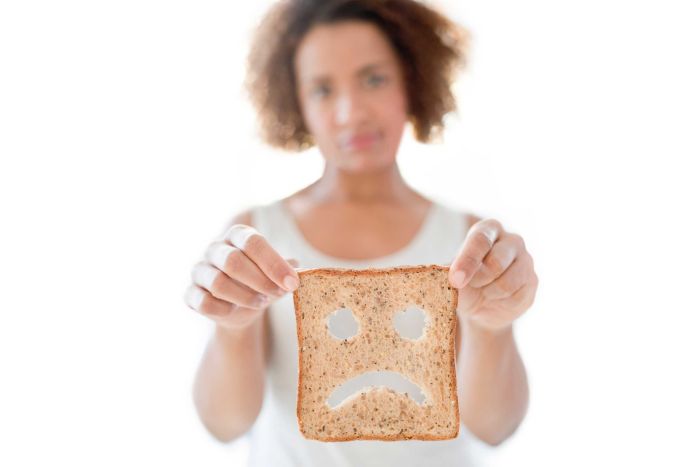 One friend complains of a stomach ache if they eat cheese; another’s kid has a life-threatening reaction to peanuts. Both call it an allergy.

The terms allergy and food intolerance are often used interchangeably, but there is a clinical difference between the two.

A food allergy is when someone’s body reacts to a harmless substance with an immune response, explains Mimi Tang, paediatric allergy expert from the Murdoch Children’s Research Institute.

“It’s the immune system recognising an antigen or molecule and thinking it’s harmful when it’s not,” Professor Tang said.

Mild allergic reactions include facial swelling, hives or welts on the skin, stomach cramps and vomiting.

The biggest danger with allergies is the risk of the severe, life-threatening reaction anaphylaxis, which can include breathing difficulties and collapse.

People with allergies that put them at risk of anaphylaxis usually have a management plan that might include carrying an adrenaline auto-injector to treat symptoms that can cause death and brain damage.

The foods most likely to cause allergies are peanuts, tree nuts, seafood, egg and milk. While most children grow out of allergies to eggs and milk, allergies to nuts and seafood can be lifelong.

A food intolerance doesn’t involve the immune system in the way an allergy does. Rather, it’s when molecules from food react in the body and irritate nerve endings, a bit like a drug side-effect.

An intolerance isn’t going to put your life at risk like an anaphylactic reaction. But they can cause a lot of discomfort and inconvenience, with symptoms including migraines, hives, bowel irritation and mouth ulcers.

Intolerances can be to naturally-occurring chemicals in foods, such as the salicylates found in many fruits and vegetables, or to food additives like colours (even natural colours), preservatives and flavour enhancers.

They can also be dose related, meaning a small amount of the substance doesn’t bother you, but you get a reaction if you eat a lot of them.

“What I say to my patients is to explain it’s different to an allergy. If it’s not an allergy, then it won’t be causing anaphylaxis and they can work out for themselves how much they can tolerate at any one time,” Professor Tang said.

In other words, people with a certain food intolerance may still be able to enjoy that food — just in smaller amounts or less frequently.

It’s worth noting that some food intolerances can look very similar to allergies, because they can target the same system.

Foods high in histamine-releasing compounds, such as stone fruit, citrus and strawberries can trigger what often looks like an allergic reaction, Professor Tang said, “but it’s not because of an allergy, it’s because of molecules in the food that have direct allergy-promoting effects”.

Why is the distinction important?

The level of risk associated with true allergies is why it’s so important to use the right terminology, Professor Tang said.

A 2016 study found that the ABS had recorded 324 anaphylactic deaths between 1997 and 2013, and that the number of deaths had increased over time.

Most of those deaths were due to reactions to medication, followed by food and insect stings and bites.

Young people were most at risk of severe allergic reactions to food, especially nuts.

However, researchers say this figure likely underestimates the real number of fatal cases of anaphylaxis.

“If they have an allergy I would say you should absolutely avoid that food,” Professor Tang said.

“It’s quite a different instruction than for an intolerance.”

How do you diagnose an allergy or intolerance?

Allergies can be diagnosed using a number of tools, including skin prick tests and blood tests.

Skin prick testing involves injecting a tiny amount of a potential allergen into the skin, leading to a red, raised area if a person is allergic to that substance.

Blood tests may be used if there are other factors that make a skin prick test unsuitable, such as a patient who can’t come off antihistamines or is at risk of anaphylaxis.

Intolerances are less straightforward to diagnose as reactions can take many forms. Doctors can work with patients to identify their symptoms, such as migraines or irritable bowel, and help link them to the food that may be the trigger.

Professor Tang said there were dangers in trying to self-diagnose an intolerance.

“If someone has reproducible reaction to a food every time they eat that food, it would be a good idea for them to get it assessed by their doctor.”

What a gruelling, six-week campaign has revealed about Anthony Albanese
Rebel Wilson recalls sexual harassment by male co-star
Downpours to leave Qld towns isolated ‘indefinitely’
Millions around the world could starve as Russia accused of weaponising food
Fever cases hit 2m in COVID-hit N.Korea
Suspect in US race-hate shooting appears in court
The struggles of being an Aussie bloke in 2017
Today's Stories