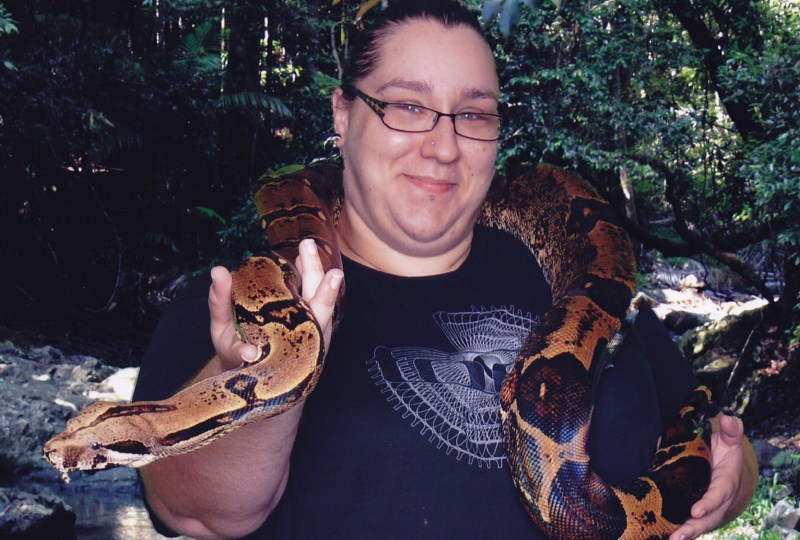 Throughout her life, Sofia Andersen, 29, has been medically classified as overweight, obese and morbidly obese.

“People would give my mum a hard time about my being big and I’d get quite angry, because they didn’t care about any other issues I might be having,” she tells The New Daily.

“It was all so focused on fat and size and food, which annoyed me because there are so many other things that I’d love to address other than just being fat.”

Over the years, Ms Andersen has suffered from all kinds of physical, mental and emotional pain.

She has a predisposition to spinal stenosis, and two men jumping on her back at a party caused extensive damage. As did bullying during her school years, the trauma of having a miscarriage and finding herself catching a tipping wardrobe full of clothes.

There have been times when Ms Andersen could barely move.

These days, however, she’s walking, working as a grief counsellor with children, enjoying various creative outlets and following a diet overseen by Cohen’s Lifestyle Clinic.

Ms Andersen started the program at 159kg and after eight months is down to 109kg, with a goal of getting to 69kg.

“With my genetics being Mediterranean, everyone in my family is six-foot tall and huge and muscular. I’ve got a bubble butt. I’m never going to be [exactly] what they suggest, but I’m happy to go along with it until I get to a size I’m cool with.”

And although she’s enjoyed witnessing changes in her body size and shape, Ms Andersen is aware that the diet isn’t forever.

“The idea of avoiding refined sugars and wheat and processed food is something I want to continue with, but I see the diet itself as temporary,” she says.

“After, I’ll go toward a more intuitive way of eating, utilising what I’ve learned, and doing my own thing.”

However, the sense of deprivation and restriction that often accompanies dieting is the main reason why general practitioner Dr Natalie Bassat tells her patients to steer clear of them.

“I find dieting to be a destructive act,” she says. “In many cases it can lead to mental obsessions with food and increased stress about appearance, as well as shame and disempowerment.”

Dr Bassat is an advocate for the work of food behavioural psychologist Dr Rick Kausman, and her argument is that dieting creates a plethora of long-term problems.

“It encourages you to completely ignore your hunger and fullness cues. It’s an external set of rules that tells you what you should be eating, how much and when, rather than being in touch with your own intuition.”

Dr Bassat believes that developing healthy lifestyle habits and finding pleasure from a wide range of sources – not just food – is the key to a happy life and body.

“I encourage all my clients to adopt healthy lifestyle habits, but it’s essential to focus on wellness, not weight.”

Ms Andersen has found following a diet easier thanks to seeing a psychologist regularly.

“Going to my therapist and saying, oh, I was at a social thing and I noticed I had these feelings and I ate the entire buffet. Then we work through it so the next time there’s a similar situation and those feelings arise, I can decide in that moment whether I’m going to eat my feelings and go back to old patterns, or try something new.”

Dr Bassat maintains that focusing on overall wellbeing and self-care, ultimately, is the most important goal.

“I try and teach body acceptance and self-compassion, because we’re human. We’re not going to be perfect, and that’s fine. Perfection is never something to strive for.”