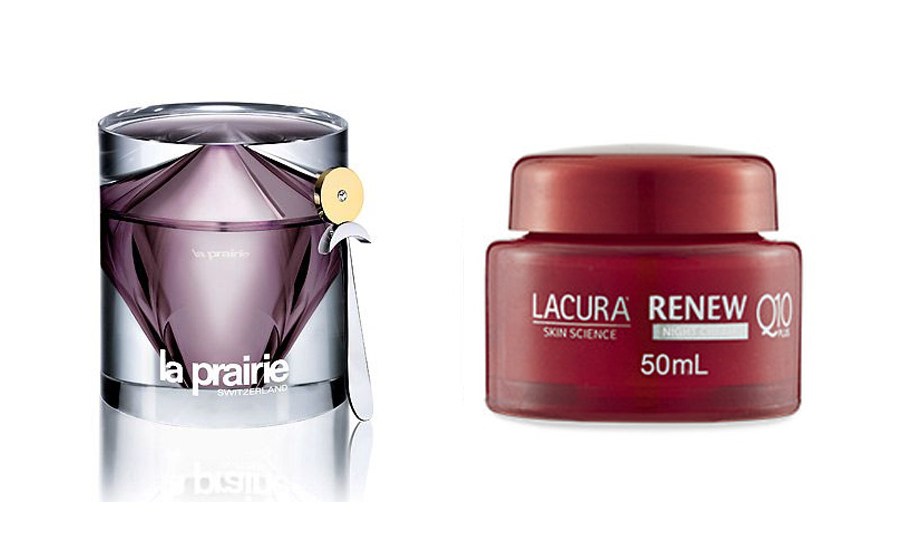 What's the difference between these creams, except $1419? Photo: Composite

Australian women spend hundreds of millions on skincare every year, yet most of us don’t have a clue about the science behind it.

Perhaps that’s why budget supermarket chain Aldi’s new skincare line Lacura is so alluring: stylishly packaged and offering the benefits of high-end creams for a fraction of the price.

With that in mind, I ditched my usual beauty regime to embark on a two-week trial of Lacura products.

And when I woke up with red spots on my face seven days in, Dr Michael Freeman – Assistant Professor in Dermatology at Bond University – was there to tell me why.

As for whether expensive skincare is it worth it? The answer is yes – with a ‘but’.

Lacura made headlines in 2015 after it launched a copycat of La Prairie’s $550 Caviar Luxe Cream for just $12.

I was promised a reduction in “visible wrinkles” (to be fair, at 26 I don’t have too many) and improved “elasticity”.

But after reading Dr Freeman the breathtaking (and tongue-twisting) 54 ingredients over the phone, he pulled the pin on that dream.

“There are a few good things in there, like tripeptide-1 [an anti-ageing ingredient] but I suspect not enough to do any good,” he said.

Dr Freeman was also disappointed with how far down sunscreen is on the list, and the variety of “buzz words” used on the label.

The night cream was definitely the more pleasant of the two moisturisers, mainly because the day cream had a strong chemical smell that sometimes lingered in my mouth after use.

As for the gel, it foamed up nicely and didn’t leave my face feeling at all dry.

On the whole, everything was going swimmingly until I woke up with at least four red spots on my face that weren’t there the night before.

Dr Freeman told me it was inevitable.

“They’ve put almost every preservative known to man in there, and that’s a big problem.”

He explained while many creams rely on just a few preservatives, Aldi’s massive list increased the chance the average person would react badly – like I did.

Like Ferrari and Thermomix, La Prairie is a brand people want to show off.

Dr Freeman said while on the whole you get what you pay for with skincare, when it comes to these super-luxe brands you’re really throwing money away for brand recognition.

“There’s no value there,” he said, pointing out that I essentially trialled the most extreme examples on the market.

Rather than go for a certain brand, Dr Freeman said we should familiarise ourselves with ingredients that work.

“Look for matrixyl, tripeptide-1 and hyaluronic acid high up the list,” he said, noting that night cream was more important than day cream.

He also said the average person will only need a 50+ sunscreen before they leave for work – and describes Actinica’s version as “the Rolls Royce”.

“In Australia, your skin will benefit most from sun protection,” he said.