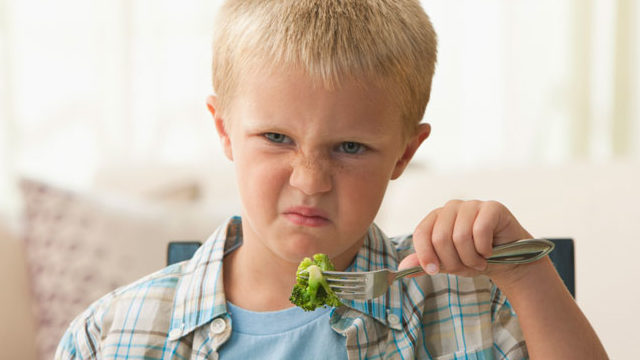 Vegies might be brimming with goodness, but less than one per cent of Aussie kids are eating the recommended amount each day.

While children eat, on average, more fruit than adults, they’re having just 1.8 serves of veg a day compared to the recommended 2.5-5.5 serves.

And it doesn’t get much better as we get older, with less than two per cent of men and about four per cent of women meeting the guidelines of five-to-six serves a day.

The findings were based on analysis by the Australian Bureau of Statistics of the 2011-12 National Nutrition and Physical Activity Survey.

More than one-third of our daily intake is now coming from so-called discretionary foods such as sweetened beverages, alcohol, cakes, confectionary and pastries – all of which are high in calories and poor in nutrients.

ABS director of health Louise Gates said that among the five food groups, fruit and grains had the best compliance.

“Less than four per cent of the population consumed enough vegetables and legumes or beans each day,” Ms Gates said as the data was released on Wednesday.

“One-in-10 was meeting the guidelines for dairy products, while one-in-seven consumed the minimum number of serves of lean meats and alternatives per day.”

Health experts say the findings on low vegetable consumption are worrying and probably linked to increased consumption of discretionary foods.

Aloysa Hourigan, senior nutritionist at Nutrition Australia, says the cost of vegetables, particularly in regional and remote areas, is also a factor.

“There could be benefits for having a sugar or fat tax for those discretionary foods to help discourage people from purchasing as many of them and that money could be used to help subsidise other foods,” she told AAP.

“If the parents don’t eat the recommended amount and aren’t serving them up to their kids, they don’t have any chance,” she said.

Ms DiPrima noted that only 4.5 per cent of kids ate the recommended amount of lean meat and other alternatives including poultry, eggs and tofu, putting them at risk of missing out on protein, iron and zinc.

“The two most commonly rejected foods are vegetables and meat. They’re harder to chew and have stronger flavours,” she said.

She advises parents persist with offering vegetables in all forms – mashed, grated, cooked, roasted, raw – at different times of the day.

“Don’t leave it until dinner at night when they’re tired and can’t chew, they’ll fall off the wagon.”

WHAT’S ON THE AVERAGE AUSSIE PLATE EACH DAY

Less than one per cent of kids eat enough vegies