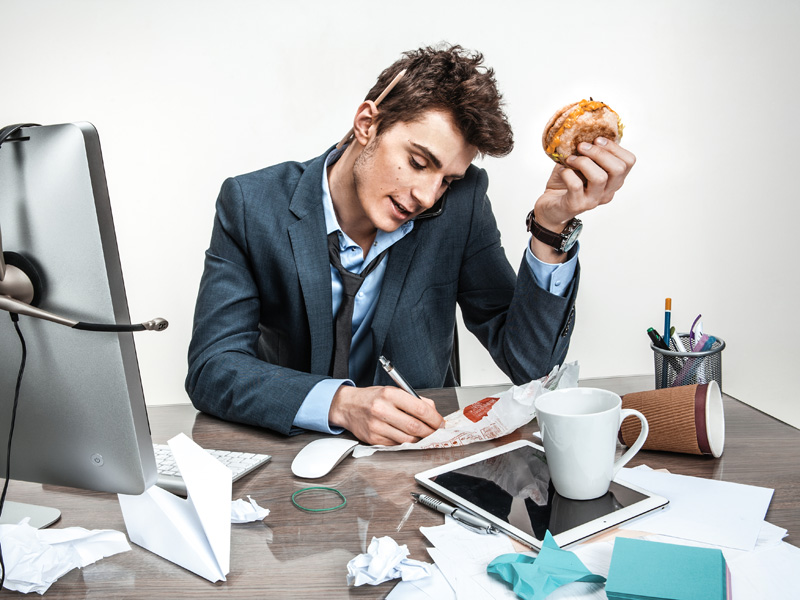 The dire health consequences of sitting for hours in the workplace could be reduced with the use of a simple device stored beneath workers’ desks.

Employees who were given pedal exercisers for 16 weeks self-reported weight loss, fewer sick days and better concentration, a study recently published in the American Journal of Preventive Medicine found.

Sitting for as few as six hours a day – the plight of thousands of Australian office workers – has been linked to higher risk of cancer, heart disease and many other common health conditions.

• Coca-Cola funds the big fat weight loss myth
• Dieting vs exercise: which is better for you?
• The science approved trick to help you exercise

These miniature desk bikes “could be provided to just about any employee, regardless of the size of their company or office”, lead author Associate Professor Lucas Carr said in a statement.

“It’s right at their feet, and they can use it whenever they want without feeling self-conscious in front of their co-workers.”

Kick your muscles into gear

Deakin University physical activity researcher Professor Jo Salmon told The New Daily the results seemed to align with other studies, which found that standing up combats the harmful effects of leaving our muscles dormant for too long.

“While it’s good to stand up and break that up, if you have a pedal desk maybe you don’t need to worry about that so much because it’s actively engaging the muscles,” Professor Salmon said.

“Pedalling under a desk is still engaging those large muscle groups and would have a similar effect.

“It’s really important for people who are in office occupations to take opportunities to stand and move whenever they can.”

The World Health Organisation (WHO) has estimated 3.3 million people die each year due to physical inactivity, making it the fourth leading cause of mortality globally.

More than pedalling is needed

Another expert noted that more than a pedal device was needed to combat the effects of sitting.

“Any intervention, any sort of advice that is going to encourage people to expend more energy while they are at work is probably going to be helpful to health,” The University of Melbourne physical activity and cancer risk researcher Dr Brigid Lynch told The New Daily.

“My concern would be how much of this is novelty factor and whether the people who used that device in the short period of the study would actually continue to use it over years once the excitement of having a new device to play with has worn off.”

A review of a popular pedal exerciser by health writers at Huffington Post reported benefits but also some problems, including lost concentration on the task at hand, banged knees and the annoyance of trying to use the device with roller-wheel chairs.

With that in mind, here are some other options.

“I actually have one myself, where you can raise the desk and sit for a period and then stand up.”

Other experts gave the following advice:

• Never take the elevator. Always use the stairs;
• Walk at lunch;
• Keep some light dumbbells under your desk and do occasional curls;
• Stand up whenever you talk on the phone;
• Conduct work meetings while walking;
• Walk to colleagues’ desks rather than sending emails; and
• Move rubbish bins and printers away from desks to increase walking time.