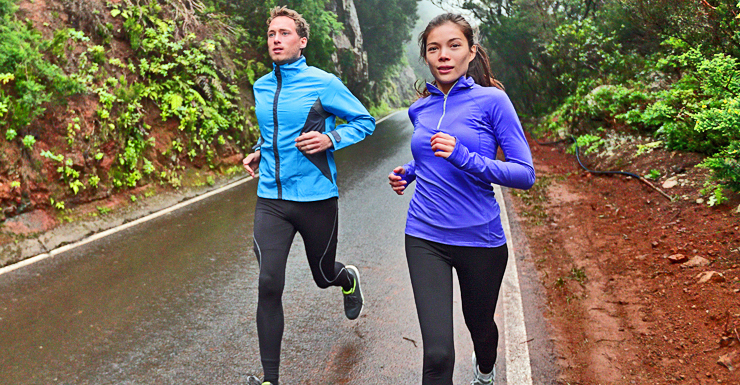 Compression gear — those sleek, black muscle huggers — are sold to us as performance boosters that, by some dark art or science, increase blood flow, reduce vibration or magically give us better posture.

The real reason to buy them is far simpler.

A recent study at the University of Essex, conducted independently but funded by market leader SKINS, found that test subjects wearing compression garments had “significant” improvements in “running economy”.

• The science-approved trick to help you exercise
• How much exercise do we actually need?
• Dieting vs exercise: which one is better for you?
• Skiers are likely to forget this one, crucial thing

If true, it would mean that runners burn less energy while wearing the tight clothing. If you were to use that extra fuel in the tank to run harder, it would give you additional aerobic benefits — such as a stronger heart and reduced disease risk.

“You would actually work harder and challenge the body to get greater adaptation – to get fitter, as it were.”

That all sounds interesting. But an independent expert told The New Daily the benefits of compression might be all in our heads — exactly where they’re needed most.

“For most people, the barriers to exercise are very much psychological,” University of Canberra sport psychologist Dr Richard Keegan said.

“If [the compression gear] is a tiny weight on that decision balance, nudging you to be more active because you’ve invested some hard-earned money in the product and the reason was to get you active, then yeah, absolutely.”

Dr Keegan himself wears the garments, not because of any performance enhancement, but because they’re warm and they help him get in the mood for exercise.

“It’s often just because in Canberra it can get cold at night. I find it’s nice to have that additional warmth.

“Even though I’m a psychologist and I know it can be a placebo, sometimes I quite enjoy that feeling of having an ounce of extra support. It might not be doing anything, but it’s that little, tiny peace of mind.

“If we didn’t make any claims about performance enhancement, there wouldn’t be an issue. People like them, they use them, they think it feels better.”

The SKINS consultant agreed with the physiological benefits.

“One of the best things about compression is just that it helps people to feel better and therefore they feel a real benefit,” Nick Morgan said.

“When you put them on, you go, ‘Bloody hell, that does really compress’. So there’s almost a self-belief that the product can do something.”

There may be another simple reason as well. Recently, The New Daily reported on the secret to habitual exercise — trigger habits.

These are behaviours that get us in the mood for exercise and reduce the mental effort of starting a work out.

Pulling on compression gear could be just one of these catalysts or ‘instigation habits’.

“In a really basic sense, you’ve got the old Pavlov’s dog trick. There is that kind of association of certain items of clothing,” Dr Keegan said.

“Without having to motivate yourself or think about it explicitly, it just becomes something you do and your default is to do it rather than to sit in front of the TV.”

“We all like to look good in our gym gear. It encourages us to go out. It makes sense to me,” said Professor Olds, who wears compression gear when cycling and at the gym.

“Anything that gets people exercising, if that floats your boat, you go for it.”

The only downside is the price, he said.

“Basically anything that gets people exercising is worthwhile, but they are very expensive.

“So there are probably cheaper ways of convincing yourself to get active.”

Runners, this is why you should use compression gear