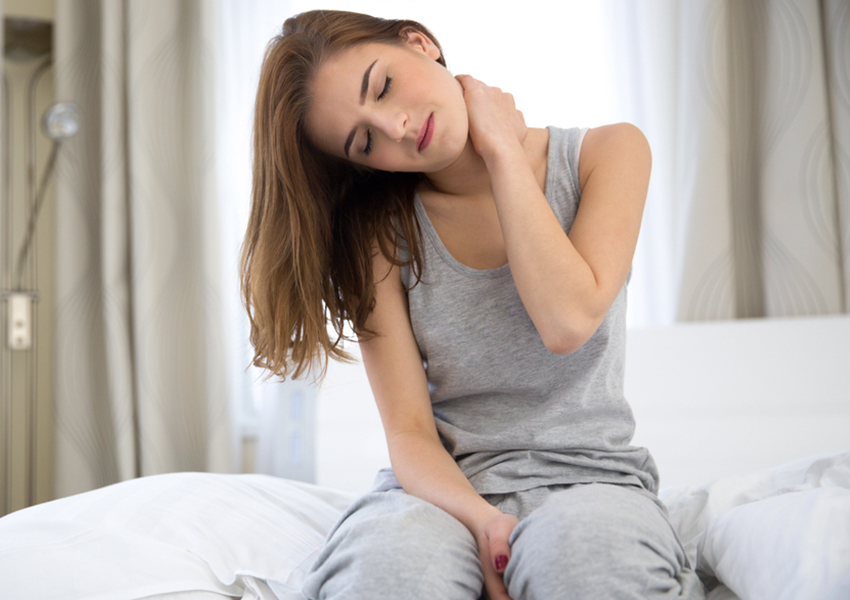 Smartphones and tablet computers are becoming – quite literally – a national pain in the neck.

Millions of Australians are using their mobile devices dozens of times a day, arching their necks as they stare downwards to send a message or search for information online.

In fact, it’s estimated the average, technology-dependent Aussie spends up to four hours a day hunched over some sort of mobile computer screen.

The result? Extreme pressure on the cervical spine that can quickly manifest into nagging pain in the neck, shoulders and upper back. Left untreated, the condition invariably leads to chronic degeneration of cartilage and bone.

• Best and worst breakfast cereals – all 240
• Got a tough job? Here’s why that’s good for you
• Aussies want booze industry held to account
• The new and improved jab to help beat the flu

According to a leading physiotherapist, Australia is in the grip of an overuse injury epidemic as our reliance on new technology such as mobile phones and tablets escalates.

“People just don’t realise the havoc they are wreaking on their neck and shoulders through bad posture and repetitive strain when using mobile devices,” Kirsty McNab told The New Daily.

“I know we can’t live without new technology, but the nation is in for a whole lot of pain – physical and financial – if we fail to take action to counter this very real health risk.”

To better understand the amount of stress that can be placed on your neck and shoulders when using your mobile device, consider that the average adult head weighs about 5kg. That’s equivalent to the bulk of a bowling ball, so imagine the stress on the neck and shoulders as you peer down at your smartphone or tablet. Multiply that by four hours a day and the potential for crippling injury becomes obvious.

“A recent study showed that if we bend our head forward 60 degrees, it’s equal to 27kg of force on our necks. That’s like having a small child sit on your neck while sending a text!” Ms McNab said.

“People tend to spend between two and four hours a day either reading or texting on their mobile phones or other hand-held devices. That adds up to 700 to 1400 hours per year of additional neck stress.”

The equation is even worse for young people. It has been estimated that some high school students can spend up to 6500 hours a year on mobile devices – all the time never thinking about a good posture as they become deeply absorbed in their mobile phone or tablet computer.

“I’m treating primary school kids every week now with physiological problems caused by their overuse of smartphones, tablets or PCs. Many are on their devices almost every waking hour of the day,” Ms McNab said.

“They come to me with chronic neck, shoulder and back pain as well as headaches and even altered curvature of the spine because they are constantly peering downwards at a screen.”

Industry figures show there are now more than 30 million operational mobile phones in Australia with tablet numbers predicted to pass seven million within the next two years.

Young people are in the vanguard with figures showing up to 90 per cent of Australian teenagers now own a mobile phone. Add to that findings by Roy Morgan Research which reveal that 53 per cent of all Australian children aged 6-13 own or use a tablet computer.

Ms McNab runs Physiologix, a Brisbane physiotheraphy centre that specialises in the prevention and treatment of repetitive strain injury (RSI).

She said that without a dramatic change in community awareness about the overuse injury risks posed by mobile devices, Australia was heading towards a major health crisis – something comparable to the RSI tsunami that swept through offices nationwide in the 1970s and 1980s following the introduction of desktop computers.

“Neck, shoulder and back damage are not the only adverse effects. Some youngsters are developing RSI of the thumb because of overuse while others complain of headaches and blurred vision because they’re staring at a screen for too long.”

Ms McNab, whose clients also include Olympians and international tennis players, called for a national campaign to inform the general community about the dangers of chronic injury when using mobile technology.

Ann Thomson, director of the Canberra-based RSI and Overuse Injury Association, supported the call for a national prevention campaign, especially because of the increasing trend of overuse injuries among young people as they took to mobile devices with gusto.

She feared that the community was “completely shutting its eyes” to the rising problem.

“Kids are starting to develop serious physical injuries from overuse of smartphones and tablets,” she told The New Daily.

“Damage to tendons caused by overuse is really hard to repair and it’s even harder for children and teens to recover from this type of injury because their bodies are growing so fast.”

Ms Thomson said universities were experiencing an overwhelming number of overuse injuries among students, particularly at the post-doctoral level.

Students ignored the risks as they concentrated on their studies and then “suddenly the whole thing catches up with them”.

“Disability services in universities are reporting that the most common complaint now is overuse injury,” she said.