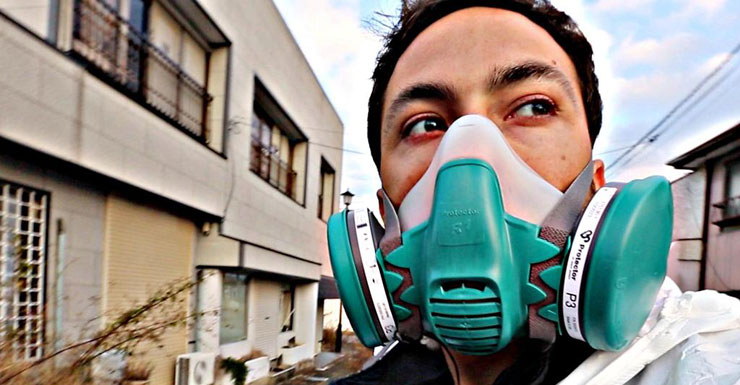 The most radioactive places on our planet are not old nuclear disaster zones, uranium mines, bomb test sites or even the cities where atomic weapons have been dropped many years ago.

Even astronauts in space, bombarded daily by cosmic rays, may be exposed to less radiation than of particular place scarily close to home.

One of the most radioactive places on earth can, in fact, easily be found right here in Australia (although we can’t lay claim to it exclusively).

According to Dr Derek Muller, levels of ionizing radiation — the bad kind that can cause the body to mutate and grow cancerous tumours — are highest on average in a smoker’s lung.

Dr Muller, who was born in Australia but raised in Canada, is a popular science educator on YouTube.

In an effort to teach us all a little more about radiation, he took a Geiger counter and a video camera to some of the world’s most notoriously radioactive places.

Chernobyl, the site of the world’s worst nuclear reactor disaster in Ukraine in 1986, only gave him a reading close to six microsieverts an hour because of massive clean-up efforts. That’s 40 times worse than Sydney, but still only the equivalent of a single dental x-ray.

Then Dr Muller held his counter to the clothes of the firemen who first attended the Chernobyl disaster, which to this day languish in the basement of an abandoned hospital. His reading – a huge 2,000 microsieverts an hour.

But that’s still nothing compared to what smokers breathe in.

“A smoker’s lungs on average receive 160,000 microsieverts worth of radiation every year,” says Dr Muller, who gained his PhD in physics education research at the University of Sydney.

“Not only are they exposed to carcinogens and toxins, they also receive very high levels of radiation.”

Popular scientist Dr Karl Kruszelnicki explained to the ABC that an estimated two per cent of cigarette deaths are caused by the “intensely radioactive” metal polonium-210.

The metal, contained in fertilisers, is soaked up by tobacco roots and leaves and then released into the airways and lungs when tobacco is burnt, Dr Karl wrote.

Two packets of cigarettes give the same radiation dose as a chest x-ray, Dr Karl estimated – which according to Dr Muller is equivalent to 7,000 microsieverts an hour.

Cancer Council Australia director of public policy Paul Grogan told The New Daily there is already “abundant evidence” that smoking is harmful and carcinogenic in many other ways, but said anything that promotes this message is helpful.

“If it helps to discourage smoking then that’s got to be a good thing, but at the end of the day we already know beyond a shadow of a doubt that smoking is really bad in respect of cancer, so we don’t need another reason,” Mr Grogan said.

Fear not: radiation is a fact of life

The overall message is that we cannot live in fear of radiation, for it is everywhere and inescapable.

Eat a potassium-rich banana and you’ll ingest the equivalent of 0.1 microsieverts an hour. Fly in an aeroplane above 30,000 feet and you’ll be hit with more than 2 microsieverts. Sit through a CAT scan and you’ll get a whopping 7,000 microsieverts, up to three year’s worth of natural background radiation.

The University of Adelaide’s Professor Stephen Lincoln, an expert in physics and chemistry, told The New Daily that we shouldn’t worry too much because brief exposures to abnormal levels of radiation increases risk “only very slightly”.

“Under normal exposures, such as going to hospital for a CAT scan or a dentist x-ray or flying high, you will get a slight increase in radiation exposure, but compared to a normal background radiation that is really quite small,” Professor Lincoln said.

Most radioactive place on earth found in Australia?