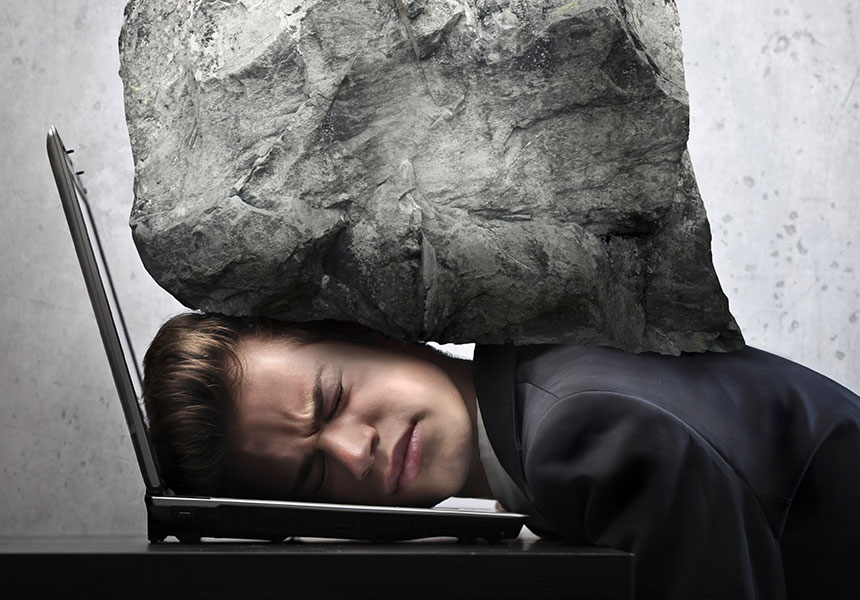 We might be living ‘now’ age, when communicating with someone or buying something from a distant land can be done instantaneously, but will the effects of our technology use be felt further down the line?

As laptops, tablets and mobile phones become extensions of our limbs, new, previously-unseen health problems are on the rise.

A 2010 British study found children with more than two hours screen time a day were 60 per cent more likely to have psychological problems, while iPad use increased the incidence of back pain in kids aged 11 to 16. Another UK study last year found that a huge 84 per cent of people aged 18 to 24 had experienced back pain in a 12-month period, causing them to lose an average of 1.5 working days each per year.

The American Optometric Association claims that 70 per cent of regular computer users suffer from computer vision syndrome – a debilitating burning, redness and dryness of the eyes.

Finally, a World Health Organisation study found that the incidence of lower back pain was higher in developed countries than in developing countries despite a lower rate of manual labour.

The WHO cited “urbanization and industrialization” of the developed world as the culprit, implying “more repetitive movements and a loss of control over work scheduling”.

From ‘text neck’ to ‘thumb stress’, here are the tech health problems that are on the rise.

A new study from a New York doctor has revealed all that time spent hunched over your phone texting can have a lasting effect. According to the study, people spend an average of two to four hours a day with their heads bent over reading or texting on their phone.

When you consider how heavy your head is (it makes up around eight per cent of your total body weight), it’s easy to see why your neck may suffer.

“There’s a normal forward curve of the neck that works like a spring to absorb the weight of the head,” Dr Anthony Coxon, Victorian president of the Chiropractors’ Association of Australia, says.

“As soon as we bend forward we increase the pressure on the spine. At a 60-degree angle, which is often how far people bend, the force on the spine can be equal to 27 kilograms.”

In the short term, this will lead to some pretty nasty neck pain. Feel like your eyes are going to fall out of your head after a long day at the office? You’re not far off.

“Dry irritated eyes is one of the most common side effects from excessive screen use,” Dr Jim Kokkinakis, optometrist at The Eye Practice, says.

“This occurs because the blinking reflex seems to be significantly suppressed when using a screen.”

Some people are blinking up to 20 per cent less than normal, which leaves your eyes dehydrated and in constant pain.

Dr Kokkinakis also warns that down the line the screen generation could see an increase in myopia, eye muscle problems and even macular degeneration.

“Every 20 minutes physically stand up off your chair, look into the distance for 20 seconds and blink 20 times completely,” Dr Kokkinakis says. While there is no concrete evidence that headphones can send you deaf, small iPod ear buds are certainly not helping.

According to the World Health Organisation, the single biggest cause of preventable hearing loss is loud music.

Ear buds that don’t block out external noise and fit comfortably inside your ear may exacerbate this issue by placing more pressure on the stereocilia – the tiny hairs in the ear that transmit signals to the brain.

To protect the fragile balance of the inner ear, use cushioned headphones and limit your listening time to 60 minutes a day at no more than 60 per cent of the maximum volume. If you’re a constant text messager, you may have noticed pain in your thumbs, fingers, hands or arms after a particularly fervent gossip session.

The condition tendonitis can arise from the repetition of a particular movement over time.

Marcus Dripps, national president of the Australian Physiotherapy Association, says arm pain and nerve entrapments can also occur from typing on your phone or laptop.

“The key message there is pick the device that’s right for the task,” Mr Dripps advises.

If you’re planning on writing a lot, switch to a desktop computer and leave your phone for shorter conversations. “Desktop computers with the keyboard separated from the screen are really nice because they provide a neutral position of your body,” Mr Dripps explains.

“However, as soon as you tie to keyboard to the screen like with a laptop, you’re basically forcing your eyes and hands to be in a similar position, which places demands on both.”

Basically, expect to end up looking like something out of the The Hunchback of Notre Dame.

What’s worse, sitting for long periods can cause your hip flexes to tighten and your buttocks to weaken, leaving you with little mobility or stability.

“This can lead to chronic lower back pain,” Dr Coxon warns.

Finally, a web-surfing session on your MacBook might just leave you feeling a little, well, gloomy.

Hunching forward or curling up around your laptop on your bed will cause you to feel bent out of shape physically and emotionally.

“One thing that’s clear is that posture can have an effect on our emotional and chemical being as well,” Dr Coxon says.

“When you have a better posture your confidence levels and serotonin are increased and cortisol is reduced.”

Step away from the screen to have a better chance of managing stress, mood swings and self-confidence.