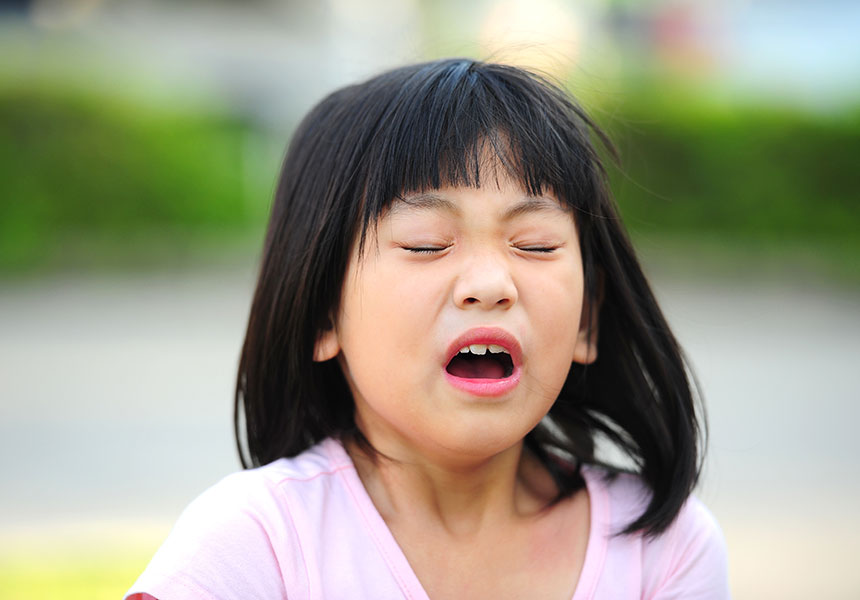 Spring is here, and with it a flood of irritating pollens to water our eyes and itch, run and sneeze our noses.

Just how bad will it get? Well, a pharmaceutical company has paid someone to find out.

• Good news on allergies, but it involves worms
• Why your attempts to lose weight always fail
• Twenty ways to avoid getting a cold

Hayfever’s common symptoms have a “significant” impact on our lives, according to the study commissioned by MEDA Pharmaceuticals.

The research, which surveyed 412 people with hayfever between July and August this year, found that 87 per cent believe it reduced their productivity at work. One in four said it interfered with their sex life, one in five struggled to meet work deadlines, and 53 per cent avoided socialising when ravaged by the symptoms.

The study did find something surprising. Apparently, many Australian sufferers are stubbornly avoiding their doctor. (Maybe the dreaded co-payment is scaring them off?). More than half of the sufferers surveyed had not talked to their GP about their symptoms in the last 12 months.

Perhaps everyone surveyed had bunkered down in a low-pollen area? University of Queensland’s Dr Janet Davies, a world leader in pollen allergy research, has found that the levels of pollen in the air (the trigger for hayfever) peak across Australia at different times of year.

For example, subtropical regions like Queensland are worst between January and April, whereas temperate regions like Victoria hit pollen highs between October and December.

But why do ‘only’ three million Aussies get the spring and summer sniffles? Well, that’s the bad news. Along with your dashing good looks, your parents also gave you hayfever. Thanks Mum and Dad.

Growing up or living in a pollen-drenched area can contribute to you getting the condition, but you probably need to have the allergy genes in the first place. This is according to University of Western Sydney school of medicine deputy dean Professor Brad Frankum.

We really don’t have any feasible way of preventing hayfever, and avoiding pollen is “almost impossible”, Professor Frankum says, because of the “very prolonged” pollen season in Australia due to our warmer climate.

He did say “almost”, though. Rest assured, there are one or two hayfever hacks to alleviate those dreaded symptoms, and The New Daily has found them for you.

1. Find out when the pollen count is high… and run for the hills!

Weatherzone publishes a pollen forecast for the major capital cities, so watch these like a hawk and deploy all possible countermeasures.

Sadly, this service is not available Australia-wide, but University of Queensland’s Dr Janet Davies is working hard to change this. Stay tuned.

Dr Davies recommends that on high pollen count days you stay indoors, close your windows when driving in the car, and dry your clothes and sheets inside so they don’t trap pollen.

NPS MedicineWise also suggests:
• smearing petroleum jelly (such as Vaseline) inside your nose when outdoors to trap pollens;
• wear sunglasses;
• splash your eyes with water;
• avoid parks and gardens; and
• rinse off pollens in the shower.

These medications are “very safe and moderately effective,” according to Professor Frankum.

“Many people can manage their disease with a few weeks of anti-histamine therapy quite successfully,” he says.

4. Ask your doctor about nasal sprays and eye drops

Most of these require a script from your doctor, and are suitable for quick relief of “severe and prolonged” symptoms, according to Professor Frankum.

5. Be sceptical of steroid injections…

Professor Frankum says he does not advocate this treatment, which is effective but risky.

“Injected steroids should really be saved for more life-threatening conditions,” he says.

Side effects can include weight gain, osteoporosis, diabetes, high blood pressure and poor wound healing, according to the Professor.

Immunotherapy is one of the latest treatments on the market, and Dr Janet Davies is an expert. She is working on broadening its effectiveness to more types of pollens.

Dr Davies says it is the “best treatment” those who are “severely allergic”, as long as your doctor recommends it.

It involves gradual desensitisation to allergens over a period of three years by injecting very tiny doses of the allergy-triggering bits of pollen into your blood or by swallowing them under your tongue.

So, if ryegrass sets you off, you would be desensitised to that particular strain of pollen.

Once densensitised, the effects can last for quite some time, but it is no quick fix.

Austin Health ophthalmologist Dr Richard Hardy says a range of combinations treatments have recently hit the market, such as the all-in-one antihistamine and nasal spray being advertised by the MEDA Pharmaceuticals survey.

“For many patients, just using one treatment alone, just using an anti-histamine or just using a nasal steroid spray, doesn’t really give relief.

“There have been studies to show that some of these medications in combination are much more effective than either one alone,” Dr Hardy says.