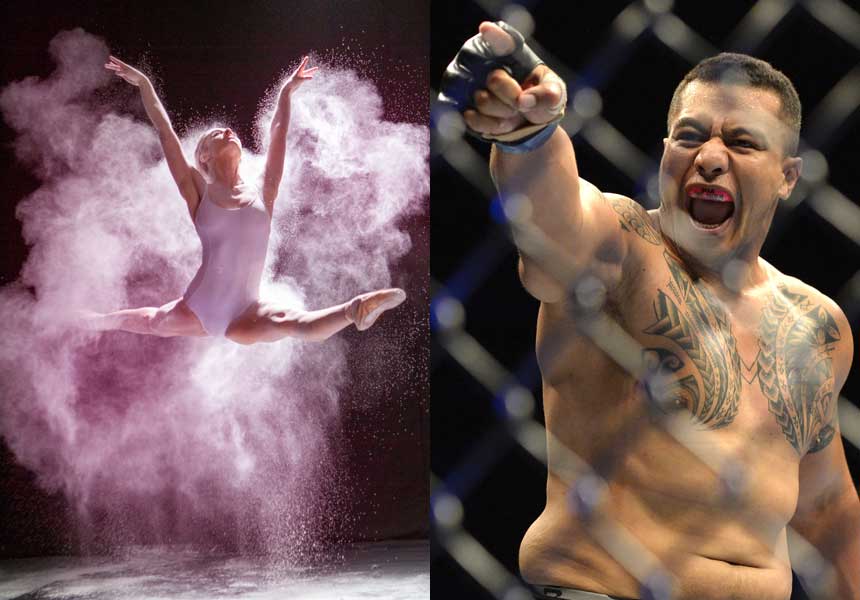 Some athletes eat light, others have to gorge themselves on food to build muscle. Some need energy for explosive but short periods of exertion, while others have to sustain themselves for hours on huge cross-country marathons.

“When Sunday rolls around everyone knows that’s “The Hulk’s” cheat meal day.”

Soa ‘The Hulk’ Palelei is a mixed martial arts fighter from New South Wales who competes in the heavyweight division of the Ultimate Fighting Championship in the USA. And he likes his food.

“I eat clean six days a week and when Sunday rolls around everyone knows that’s “The Hulk’s” cheat meal day, but we keep it at a meal not a whole cheat day even though sometimes I would like to!” Mr Palelei said.

Check out the daily intake of a cricketer, swimmer, MMA fighter, ballerina, ultra distance runner, wrestler and a boxer below.

If you don’t see your favourite sport here, the Australian Institute of Sport has a database full of nutrition recommendations for Alpine Skiing right through to Volleyball. Ellyse Perry is a sporting Wunderkind, playing as both a football defender and cricket all-rounder, while also a student at the University of Sydney. Understandably, she needs a fair bit of energy to keep her going.

Her favourite health foods are natural peanut butter and raw cacao. To treat herself, she goes for ice cream, chocolate or carob. Imogen Chapman, a ballerina at The Australian Ballet and one of six nominees for this year’s Telstra Ballet Dancer Award, has a much more petite diet than a Tongan fighter. Lighter meals like smoothies, sandwiches, fruit, cheese and yoghurt make up the bulk of her diet, balanced with meat, veggies and pasta.

After a massive week, practising for seven hours a day or performing until 10pm every night, she is definitely partial to a treat.

“Yeah, I love a bit of chocolate,” she said. A typical day for Richard Bowles is 12 hours of running. He often runs two marathons a day for weeks at a time over very treacherous terrain.

Because of the vast distances he covers, a lot of his diet is sweet and sugary.

“Usually high GI foods work best, such as rice pudding and cookies and that type of thing.”

His favourites are ice cream and sweets from the bakery.

“I also enjoy red wine, and as my partner is a non-drinker that means I get to drink a bottle to myself!” After losing her right leg above the knee to cancer, Ellie Cole took up swimming as a form of rehabilitation, and discovered a hidden talent.

Her competition diet often varies depending on where in the world she is racing.

“Sometimes it is hard to get a meal before racing, and our hotel room will not have any cooking equipment, so I might have to make do with what I can sneak out of lunch or buy some extra muesli bars from a local store.” Mohamadreza Ashori, 30, is an Iranian asylum seeker who won the 74 kilogram division at the Australian Cup of Wrestling in May.

His dream is to compete at the Olympic Games, and he would have qualified for this year’s Commonwealth Games if he had gained citizenship in time.

“If you use, for example, meat or bread and butter with honey, it is not good because they do not keep your body powerful, but lentils gives you enough energy to to carry on with the match,” he told The New Daily through a translator.

He is a big fan of meat. Chicken and fish are his favourite healthy foods. For a snack he likes chocolate, coffee and ice cream. Cherneka Johnson, 19, based in Redland Bay, Queensland, was the gold medallist in last year’s 54 kg division in the Australian Boxing Championship, and is this year’s silver medallist in the 51 kg division. She is also a Jetts personal trainer.

Her diet is vastly differs between training and “making weight” before a match, due to the strict weight class requirements.

“When I was making 51 kgs, it was a real struggle for me. Pretty much the whole week out I was only having maybe one meal a day,” she told The New Daily.

The day before weigh in, she eats and drinks nothing, and spends a lot of time in the sauna.

Fuel your body before, during and after workouts with the Paleo Diet for Athletes. Buy it here.

Diet of champions: what our star athletes eat