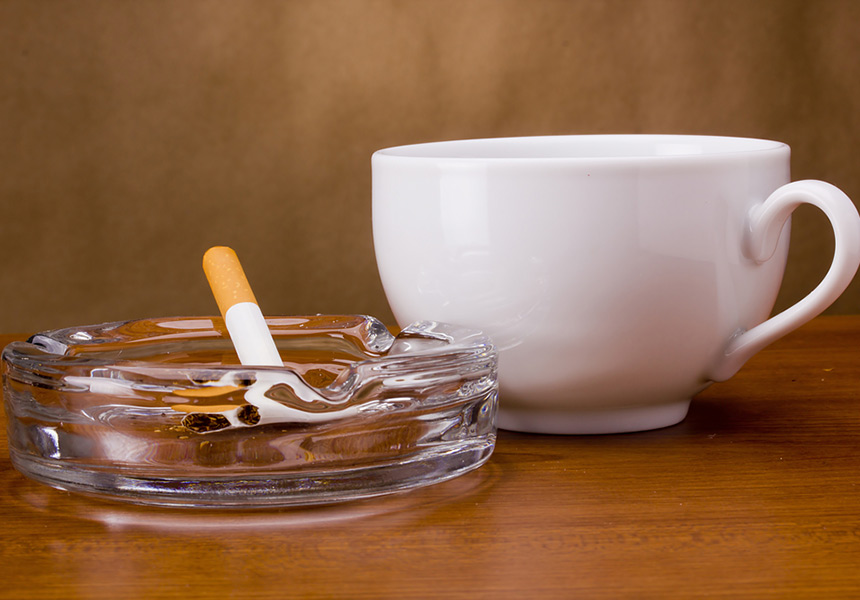 As smoking rates plummet across the country, Australian consumers have adopted caffeine as their new daily habit, now spending more than $9 billion a year for a fix of the world’s second-most popular drug.

The national daily smoking rate has dropped 15 per cent in the past three years according to a report from the Australian Institute of Health and Welfare (AIHW) released last week.

In comparison our coffee consumption has grown 38 per cent since 2010 with the trend set to continue as consumers embrace a burgeoning coffee culture.

• Are you getting enough exercise? Probably not
• The average Aussie in 2014: How normal are you?

More than two billion cups of coffee are bought for consumption away from home and work in Australia each year, with average consumers spending almost $8 a week on take away coffee, according to BIS Foodservice’s Coffee and Beverages 2014 report.

Office workers are now much more likely to make a coffee run than huddle in windy doorways to have a puff, while the notion of ‘grabbing a coffee’ has become shorthand for casual socialising. And we’re not only buying more ready-made coffee, we’re also drinking more at home, with the purchase of home coffee machines increasing and our taste for instant coffee seeing us spend $1 billion on it last year, according to analysis by Euromonitor International.

In 2013 espresso-based coffee out-rated instant coffee as the preferred homemade beverage in what the head of BIS Foodservice, Sissel Rosengren called an “enormous development”.

Ms Rosengren said the popularity of coffee was being driven by the younger generation, and 21-year-old Jack Dawson of Melbourne agrees.

“None of my mates smoke,” he said, “but we’re all coffee snobs and will go out of our way to buy quality coffee from a good barista.”

Ms Rosengren said this coffee snobbery was widespread, but the nation was yet to develop a truly sophisticated coffee palate.

“Coffee is predominantly milk-based in Australia, whereas in countries such as Italy, France and Scandinavia it’s far more about black coffee and you don’t see the same level of snobbery,” she said. While Australian coffee consumers are increasingly concerned with brands and blends (the Nespresso pods for instance, are sold in coffee boutiques and offer limited-edition premium blends), the Federal Government’s cigarette plain packaging laws have removed brand differentiation and led to a plunge in consumption.

The recent AIHW report showed that smoking rates had declined from 15.1 per cent in 2010 to 12.8 per cent in 2013, while the average amount of cigarettes smoked weekly dropped from 111 to 96.

Simon Chapman, a professor in public health at the University of Sydney said plain packaging was almost “like finding a vaccine that works very well against lung cancer”.

Smoking is a major cause of cancer, associated with between 20 and 30 per cent of cancer cases and responsible for the greatest burden on the health of Australians according to the AIHW.

And while choosing a latte over a ciggie may be a health boon, the Australian Drug Foundation is quick to point out that caffeine is also a drug – last year caffeine withdrawal was classified as a mental disorder for the first time, such are its significant physical effects.

Caffeine is the world’s most popular psychoactive drug (a chemical substance that affect brain functioning, mood and behaviour). According to the Australian Drug Foundation (ADF) caffeine use can cause issues such as anxiety, irritability, headaches, increased breathing and heart rates, dehydration, stomach pains and lack of concentration. Children or young people who consume energy drinks containing caffeine may suffer sleep problems, bed-wetting and anxiety.

While moderate caffeine use (up to three medium-strength cups a day) is unlikely to cause long-term problems, heavy use can also lead to osteoporosis, high blood pressure and heart disease, ulcers, severe insomnia, depression and infertility.

Michelle Hamer is a Melbourne-based journalist and author. Her books are available here and here

Going for coffee is the new cigarette break