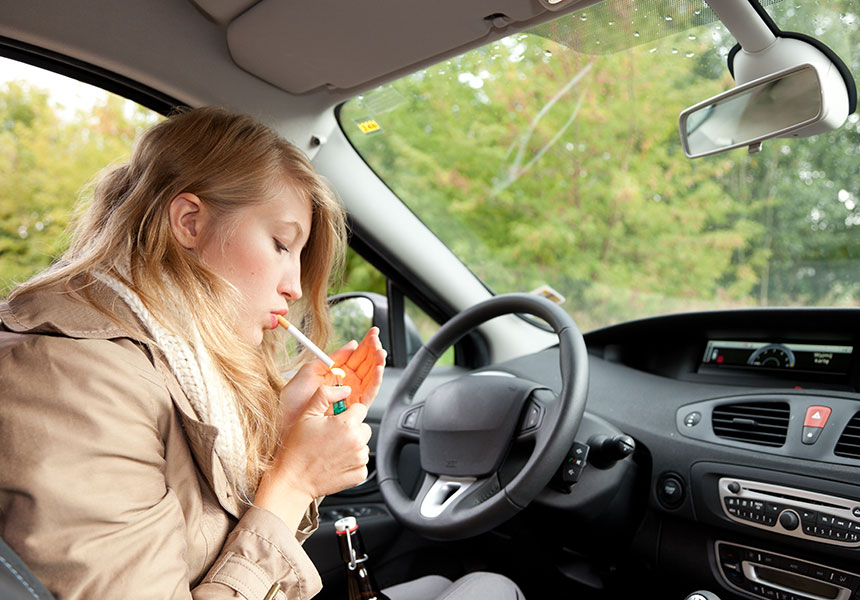 I had a parent who smoked. On cold winter days the windows would stay firmly up as Mum would pull out a cigarette, surrounding my brother and me in the odour of the ash tray. My clothes, my hair and my lungs choked with revulsion. I hated it and I hated her for it. It was uncomfortable and unpleasant even to a small child who didn’t care about the health impacts. But what was a child to do? Refuse to get in the car?

Mum would continue to smoke, hating the habit herself and eventually I left home, and she died — at the age of 45.

In the United Kingdom the parliament has backed a ban on cigarette smoking in cars while children are present. Inevitably the discussion is relevant to Australia.

The debate is bringing out the usual suspects of liberationists who see their freedoms being restricted versus those in favour of state regulation.

Those in favour of regulation to prevent similar experiences to mine say the state must intervene to prevent harm. The liberationists cry ‘Nanny state!’ Adults have the freedom to decide and to determine the environment in which children are brought up, they say. But is liberation versus regulation right for this debate? Are our communities missing the real issues?

The liberationists would say that if we ban cigarettes, what’s next? Fast food, sport, camping in the cold outdoors? Where do you draw the line?

The ‘nanny statists’ say such arguments are alarmist. The state has already intruded too far into the rights of parents to be parents, they argue. Some decry the outlawing of the strap, or the cane in schools, or smacking. They see a decline in the ability of parents to discipline children when children do not wish to do as they are told, resulting in a fragmented society.

After all, they argue, what child wants to eat Brussels sprouts, do homework or tidy their room?

One of the tough things about being a parent is knowing when to discipline a child and when to encourage risky behaviour in order for the child to learn lessons that will be valuable later in life. Isn’t this for the parent to decide what risks children are exposed to?

Parents do have the right to regulate their child’s behavior and the child’s environment. The parents decide the housing, the suburb and most often which school the child goes to. But this right is not unfettered. So where should the line be drawn?

Those who oppose cigarette smoking in cars do so based not on a child’s comfort; they do so based on a child’s health. They say that the science is clear. Smoking and passive smoking cause long term inflated risks of many diseases.

But so does fast food. The long-term effects of too much television and internet activity are subjects of study. A parent who lets their child participate in sport will also inflate the risk of knee injury, broken legs or broken arms.

We don’t (yet) regulate fast food or television access (although we regulate content) and parents decide on children’s participation in sport, often driving them to venues in cars that may or may not have smoke. Parenting is a world full of grey zones.

What about the risky behaviour of sex? If a 16-year-old seeks a parent’s advice about engaging in consensual sex with the child’s 16-year-old partner, in many jurisdictions such activity would be illegal. But who would disagree with a parent’s right to advise a child – indeed, say that the parent must advise? Some parents would ultimately say yes, some say no, and some would wish the question were never asked.

Dressing the debate up in questions of rights versus freedoms, respectfully avoids the real and harder question to debate — the one of proximity of harm. Sometimes, such as in sport, society encourages parents to put children in harm’s way. In others, society does not.

So what of cigarettes? Is the harm of cigarette smoking ‘proximate’ enough to ban what is a legal activity in cars with children? Long term cigarettes elevate the risks of many diseases and the balance of science says that over time a smoker’s life is likely to be less than a non-smoker, but not certain. Is that proximate enough to ban?

The liberationists would say that if we now ban cigarettes, what’s next? Fast food, sport, camping in the cold outdoors? Where, they cry, do you draw the line?

Perhaps that is indeed the question. Where in society should we draw the line? Let’s not be distracted on the liberationist versus regulation argument. Rights of parents are and should be limited. Isn’t the real question one of science? Is the science now clear enough to show that passive smoking in cars causes a proximate and significant risk to children?

To me the science is clear — if cigarettes were to be invented today, it would dictate that they are poisons that kill people. I believe they should be banned completely, not just in cars. At the very least we should protect kids from the thoughtlessness of adults.

Up in smoke — a child’s right to good health