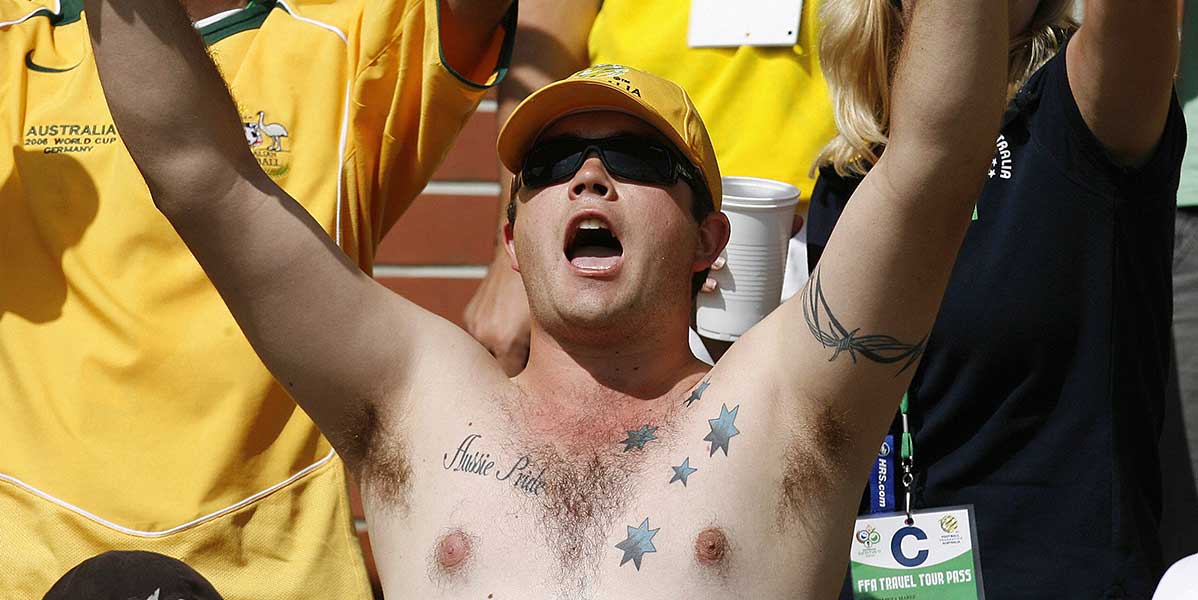 Culturally, we have sought to put limitations on how Australian masculinity can grow and change over time. The traits of compassion, empathy, respect and restraint seem not to feature in this approved version of Man.

We too often elevate the rogue.  We condone the violence of sports stars – the scrapes and misdemeanours, both on and off-field. We forgive their excesses with winking admiration. We root male achievement in the physical world of sport and relegate intellectualism as its inferior.

At the pinnacle of this vast manscape is Australia’s Prime Minister, a politician who has achieved office as a doer of things. A runner, a swimmer, a sportsman, a wearer of hard hats. The framing of Tony Abbott as a man’s man has been almost Putinesque in its execution. Had last year’s election campaign gone any longer, we might have seen him riding on a bear. He is the archetypal man in a land of archetypal men. Our culture is so macho that the defining political struggle of recent years was between two men and a woman, both of whom were trying to oust her from office prematurely. The machismo machine, so wounded by the outrage of a female prime minister, unleashed nasty misogyny and the media responded with a narrative of ‘kniving’.

Of course, Tony Abbott is not the only politician to realise the power of the myth of the man-tastic. Eons ago, in 2006, former Labor leader Mark Latham lamented a perceived decline of Australian masculinity. “One of the saddest things I have seen in my lifetime has been the decline in Australian male culture — the loss of our larrikin language and values,” he wrote, in a passage from his book. “Australian mates and good blokes have been replaced by nervous wrecks, metrosexual knobs and tossbags.”

If it is this male culture that spawned brainless street violence, then let us not shed a tear over its demise. Our paroxysm of panic about late-night violence and a so-called ‘king-hit’ culture shows no sign of abating. But are ‘king hits’ a symptom of a macho culture?

Are ‘king hits’ a symptom of a macho culture?

The coverage does not suggest it, but NSW Bureau of Crime Statistics data show alcohol-influenced assaults are at the lowest level in over a decade. That said, the Australian Bureau of Statistics recently found that six per cent of men aged 15-24 have suffered a physical assault in the past year. Violence, or the threat of it, is a reality for young Australian men.

The palpable agony and grief suffered by the parents of alleged ‘king-hit’ victims combined with concerted change campaigns led by Fairfax Media and News Ltd have made such attacks the issue of the moment.

Alcohol is the villain, we are being told. It undoubtedly plays its part. Last month, researchers from Monash University and the Victorian Institute of Forensic Medicine released their research into 90 ‘king hit’ deaths since 2000. The researchers found alcohol to be a major contributing factor to such deaths.

Anger over ‘king-hits’ has ebbed and flowed for years. Optimists will sense an opportunity for change this time — some decisive action can that ‘solve’ this problem once and for all. Pessimists could be forgiven for suggesting legislators and hoteliers will wait until the din grows quiet.

Alcohol seems an easy scapegoat. As legal professionals know, alcohol is not a defence. It did not commit these alleged crimes. Young men did. Why then are we so hesitant to look at violence by men by examining and addressing the environment in which boys become men? Some in America, at least, are beginning to wonder.

‘King hits’ certainly tell us of an endangered type of Australian masculinity. Within this set ‘manning up’, ‘growing a pair’ and not being ‘such a bitch’ are catch-crys. Consequence is an afterthought. Such masculinity exhibits dangerous insecurity in its pressing need to be re-enforced and re-stated, through violence and excess.

The moral panic over such attacks has focussed on the perils of alcohol, failings of state governments, and even the semantics of such assaults. But linguistic tricks and booze measures alone will not reduce violence.

Luke O’Neill is a Sydney-based writer and editor.

‘King hits’ are a symptom of macho culture