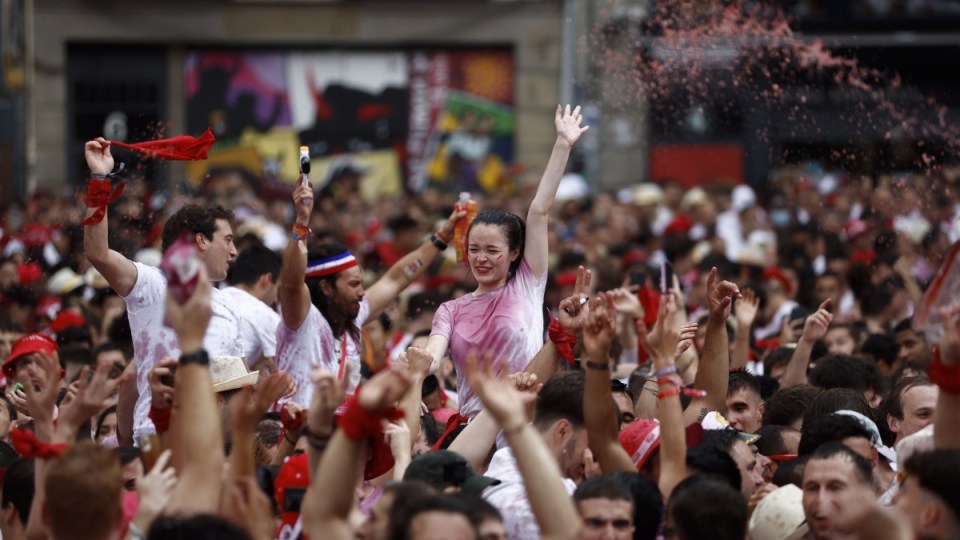 Thousands of revellers have erupted in celebration at the start of the San Fermín bull-run festival. Photo: EPA

Thousands of revellers have erupted in celebration as the traditional “chupinazo” firework was ignited to start the San Fermín bull-run festival in the Spanish city of Pamplona, ending a two-year hiatus due to the pandemic.

Rain did nothing to dampen the atmosphere as crowds, nearly all dressed in the traditional garb of white trousers and shirt with red sash and neckerchief, crammed the tiny town hall square for the noon event.

After the firework exploded, the revellers continued spraying each other with red wine.

The highlight of the nine-day festival are the early morning “encierros,” or bull runs, starting on Thursday, when thousands of thrill seekers scramble like mad to avoid six bulls as they charge along a winding, cobblestoned route to the city’s bullring.

Spectators watch from balconies and the wooden barricades set up to line the course.

The rest of each day is for eating, drinking, dancing and cultural entertainment.

The bulls used in the runs are killed by professional matadors in bullfights each afternoon in the city ring.

The festival was made world famous by Ernest Hemingway’s 1926 novel The Sun Also Rises.

Before the pandemic made it impossible to hold in 2020 and 2021, it hadn’t been suspended since the Spanish Civil War in the 1930s.

Pamplona’s population of some 200,000 balloons to nearly a million on peak days during the festival, especially over the weekend, including many foreigners.

Many visitors don’t stop partying through the night or grab some sleep wherever they can outside.