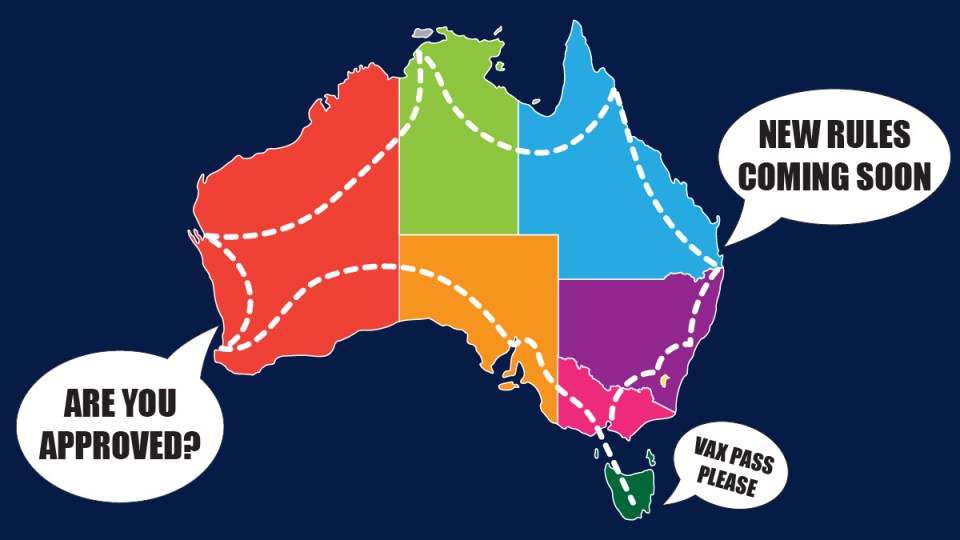 Rules for interstate travel depend on where you're going – and where you've been. Photo: TND

As case numbers reach record highs around Australia and vaccination rates are also on the rise, interstate travel rules have again changed.

Despite the surge in Omicron cases, Queensland has announced the border restrictions for hotspots will be removed from Saturday.

The requirement to present a negative test on arrival will be removed and a border declaration will no longer be needed to enter the Sunshine State.

The rules were set to remain in place until the state reached 90 per cent fully vaccinated, but will be dropped early as at least 88 per cent of Queenslanders have had both doses.

The 90 per cent target is expected to be hit in the next week, at which point international borders to the state may also be relaxed.

Chief health officer John Gerrard said the border restrictions had “done their job” by allowing Queenslanders a chance to get vaccinated.

“Now the virus … as expected is spreading through Queensland, but with a vaccinated population, so the job has been done and these borders are no longer required,” he said on Thursday.

Some venues in Queensland will continue to refuse entry to  unvaccinated patrons, as per current health restrictions.

Health Minister Yvette D’Ath said it should be assumed that anyone travelling domestically could be carrying COVID-19.

“We are still wanting to make sure that only fully vaccinated people are entering those venues and those events that are more likely to see fast transmission,” she said.

For those who want to visit Queensland and for Queenslanders keen to get home, this easing of the rules will come as a welcome relief.

For other interstate travellers, here is an update on the rules by state and territory.

From February 5, the rules for international and interstate travel to WA will change.

In the meantime, there are five categories for interstate travel to WA – from very low risk to extreme risk – each with its own requirements.

But all states and territories have been classed as extreme risk, meaning only approved travellers are allowed to enter.

The rules around travel to NSW depend on where travellers have been.

Anyone who has not been to an area of concern in the 14 days before arrival can enter without restriction.

But those who have been to an affected area, an area of concern or are a close contact will need to complete a NSW entry declaration and may be subject to isolation requirements.

Travellers from interstate can come and go from the ACT freely, unless they are a close contact or a confirmed case.

Non-residents should not be travelling to the ACT until their isolation period has ended, but residents are allowed to return home to the ACT.

Victoria is open to all domestic travellers, with no permit or testing rules unless you have been overseas in the 14 days beforehand.

Returning residents who are active COVID-19 cases are allowed to enter the state, but must go straight home to complete their isolation.

The rules to enter Tasmania from interstate depend on vaccination status, but all travellers need to complete the Tas e-Travel registration form.

Travellers who have been in a high-risk area need to provide a negative COVID-19 test (either PCR or RAT), while those from an extreme risk area must quarantine.

Unvaccinated travellers, including residents, will not be allowed to enter unless they can meet special conditions – you can find those here.

South Australia has removed restrictions around interstate travel, but travellers should download the mySA GOV app before arriving.

Travel around the state is mostly allowed, but there are some rules around travel to Aboriginal communities.

Interstate travellers who are 16 or older and fully vaccinated are welcome in the NT, but the below rules apply.

They need to complete a border declaration form five days before arriving and must do a RAT within two hours after getting there.

The NT supplies RAT kits on arrival and travellers also need to do tests on day three and day six.