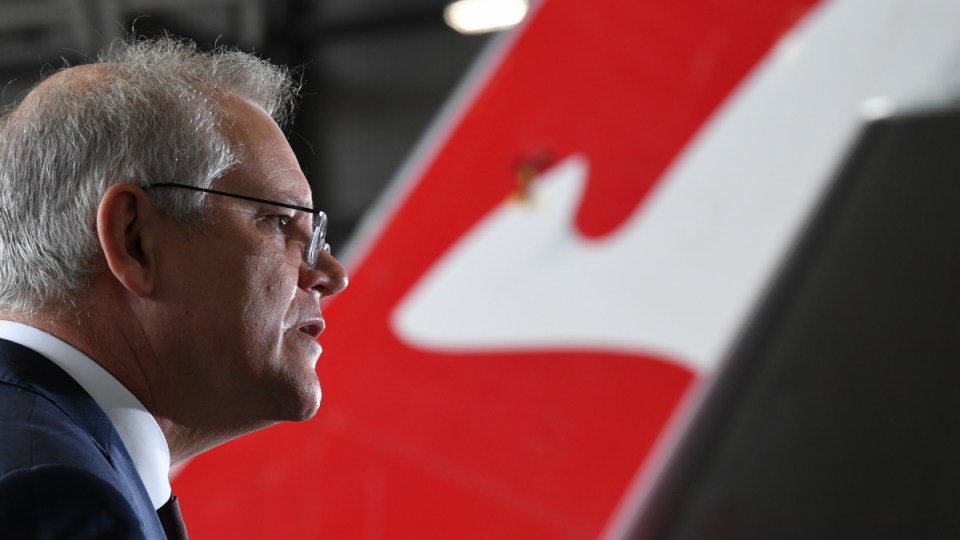 International travel restarting in Australia’s two most populous states has been dangled as an incentive for vaccine laggards to pick up the pace.

Victoria will join NSW in allowing quarantine-free arrivals from overseas next month, with the federal government opening borders on November 1.

While over-16 vaccination coverage above 80 per cent will be the trigger for relaxed restrictions for Sydney and Melbourne, some states are well behind that mark.

Queensland and Western Australia – which have avoided major lockdown-inducing coronavirus outbreaks – are yet to reach 60 per cent two-dose coverage.

Prime Minister Scott Morrison said hitting 70 and 80 per cent in those states would be crucial to moving to the next step.

“The most important thing to open up Queensland and Western Australia is to get those vaccination rates higher,” he said at Sydney Airport on Friday.

Qantas has announced it will bring forward international flights and reinstate 11,000 stood-down staff before the end of the year.

All stood-down Qantas and Jetstar workers, including 5000 employees linked to domestic travel and 6000 to international, will return to work in early December.

A new route between Sydney and New Delhi will launch on December 6, with three flights a week.

Sydney to Singapore flights will resume on November 23, four weeks earlier than scheduled. It will operate three days a week before ramping up to daily before Christmas.

Sydney to Fiji will be brought forward to December 7 for four flights a week.

Qantas will fly from Sydney to Johannesburg three times a week from January 5, three months earlier than scheduled.

From January 14, the airline will resume its Sydney to Bangkok services more than two months earlier than expected, while Jetstar flights to Phuket will start on January 12.

He said the centres would be used for unvaccinated arrivals.

“This won’t be the last pandemic we face. There will be other challenges in the future,” he said.

He also urged Queensland to rapidly expand its home quarantine program to allow 8000 residents stuck in other states to return.

“You’ve all seen those reunification scenes as people have got back over the border into Victoria,” Mr Morrison said.

“It was a real Love Actually moment watching that happen, it was tremendous.”

Tasmania will reopen its borders to all mainland states and territories on December 15.

Two days later Queensland is due to allow fully vaccinated people to enter the state from jurisdictions with the virus.

But WA has ruled out dropping travel restrictions this year.

Deputy Labor leader Richard Marles said it was important there was a high level of co-operation between state and federal governments on restarting international travel.

“There are going to be thousands of stranded Aussies who have been waiting for this for months,” he said.

“The international border being open now for NSW and Victoria is going to be really good news for thousands of Australians overseas wanting to come home and reunite with their families.”

The Geelong-based MP emerged from quarantine on the same day as Melburnians exited the world’s longest lockdown.

Treasurer Josh Frydenberg – the most senior Victorian in the federal government – said people regaining freedoms would be a springboard for economic recovery.

“Melbourne is finally free – morning margaritas all round,” he told Sky News.

Mr Frydenberg said the government was developing plans to return visa employees. But the first step would be clearing the backlog of Australians stranded overseas.

Victoria had 16 deaths and 2189 more virus cases on Friday, while NSW had 345 infections and five people died.

Nationally, more than 86 per cent of people aged over 16 have received at least one vaccine dose while 71.7 per cent are fully protected.