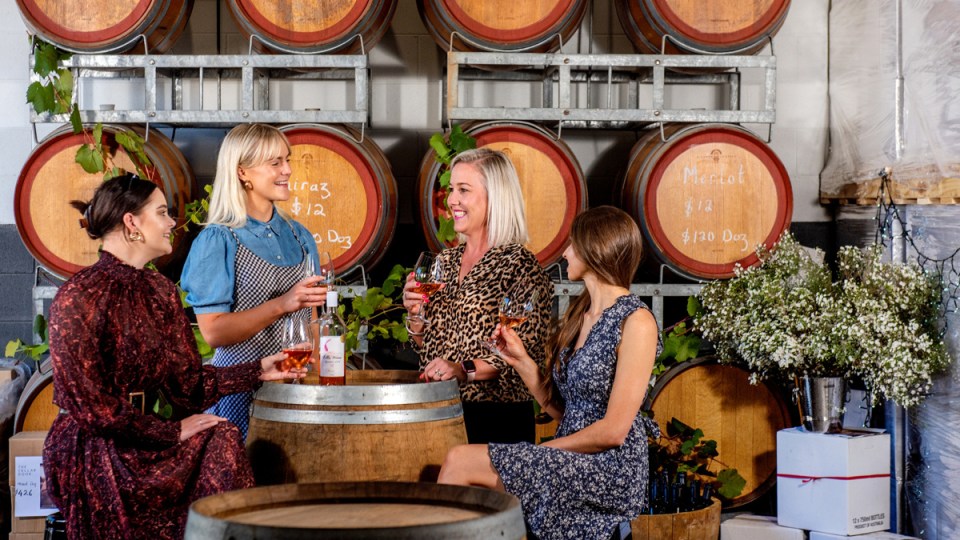 Wine among the barrels at Ellis Wines, featuring drops from the region.

“People love our vegan cauliflower mac and cheese pie, they go crazy for it.”

Clearly regional cities have changed a lot in the decades since I grew up in country Western Australia. Or maybe it’s a Bendigo thing?

The Victorian city recently became a UNESCO City of Gastronomy, after all, which suggests a certain progressive and adventurous streak when it comes to food.

That’s certainly the case here at Hoo-Gah in Bendigo’s CBD, where I’m chatting with owner Gina Triolo while we snack on her gluten-free doughnuts (surprisingly chewy, in a good way) and her banana and pecan scroll (completely delicious).

Even snacking in Bendigo is cutting-edge, as we sit in a café space decorated with art commissioned from local creators. Near us is a large portrait of a raccoon in a ruff within a heavy gilt frame, and the café takes its name from the hot-right-now Danish concept of hygge, meaning ‘cosiness’.

As Gina has found success with plant-based dishes, she’s building an entirely new vegan bakery in the adjoining space.

Green Goddess Plant-based will open in September, “adapting vegan food to make it accessible to everyone,” she says. That means more popular items such as raw caramel slices, a three vegan cheese sandwich, and a mushroom, spinach and zucchini flatbread.

Hoo-Gah is at 4 Mitchell St, Bendigo

Hoo-Gah is the first stop on my informal stroll through the Bendigo CBD, seeking businesses selling food and drink they’ve made themselves. Just a few steps away is Indulge Fine Belgian Chocolates, which sounds like a place I should get to know better.

“We import chocolate from Belgium, then use as much local produce as we can in crafting our chocolates,” owner Hayley Tibbett says.

“Everything is small-batch production.”

One of the business’ most popular products is its signature Bendigo Gift Box, featuring four finely crafted chocolates which change from time to time; currently the line-up is shiraz ganache, salted caramel, honey and cinnamon ganache, and Castlemaine Rock (chocolate around a hard centre).

There’s also a Chinese dragon series of chocolate bars related to the famous ceremonial dragons housed in the city’s Chinese Museum over the years, though these can only be bought at the Bendigo Visitor Centre.

Another star of the show is the shop’s ruby chocolate, studded with a locally made pink muesli. Made from red cocoa beans, it’s billed as “the first new chocolate in 80 years.” Whatever the novelty value, I like the taste and texture.

Indulge is at 12 Bath Ln, Bendigo

The bluebird sings of pastries

Off busy Mitchell Street, the interior of Bluebird Patisserie is an island of calm. A chandelier hangs over a timber counter, with many cakes on show in the window.

The effect is of an old-fashioned French patisserie that has been here for years, though it only opened in September 2020.

“We wanted to bring a little bit of France to Bendigo,” owner Mynette Richardson says.

“We have a real passion for that.”

From time to time the patisserie also turns out unconventional macarons, such as ‘burgers’ which used a sliced of yellow-dyed Callebaut chocolate to represent cheese. Très chic.

Wine and the city

My final stop on this maker stroll is Ellis Wines, near the main railway station.

Another recent opening, from August 2020, it aims to bring the cellar door experience to the city.

“There’s no other business like this in the centre of Bendigo,” director Raylene Flanagan explained.

“It’s easy for people to get to us, do a tasting, then continue with their day. Tourists get off the train and walk to us, too.”

Ellis Wines’ flagship drop is its shiraz, which grows well in the rich Cambrian soil at Colbinabbin, about 40 kilometres away in the Heathcote wine region. The winery also produces cabernet sauvignon, merlot, rosé, viognier and a sparkling moscato.

All the wine is stored and aged in the city premises, and tastings are available. By pre-booking, you can match the wine with a platter of local cheeses.

The cellar door has been well received, Raylene said.

“Maybe because of COVID, people are thinking more locally. And they like talking to the owner of a family business.”

Walk this way to deliciousness: A guide to Bendigo’s dining delights