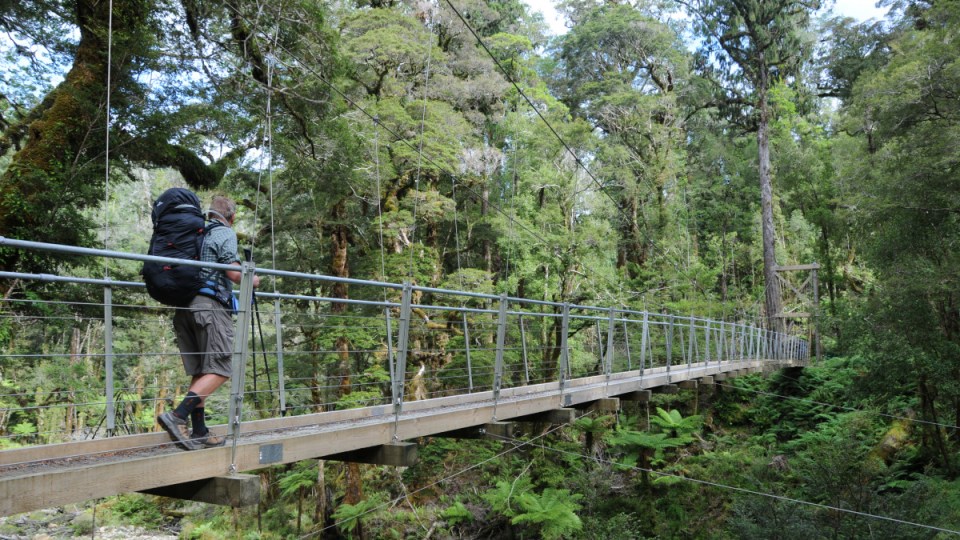 The Paparoa Track, built for both walking and mountain biking, is the first new NZ Great Walk in 20 years.

My eyes watered in the wind that lifted clouds across the ridge during our second day on New Zealand’s newest great walk.

Between gaps in the mist, I looked into the steep valley that ran down to a now shuttered mine. In November 2010, an explosion at that mine, Pike River, trapped and killed 29 miners. It was one of the darkest days in New Zealand’s modern history, one for which final answers are still being sought.

The miners’ bodies have never been recovered. But their families wanted to create something in memory of their loved ones. The Paparoa Track is part of that memorial. Travelling along it, I couldn’t help but feel grateful for the track, but saddened by the tragedy.

The Paparoa Track, built for both walking and mountain biking, is the first new NZ Great Walk in 20 years, the first to be purpose built and the 10th in total, joining ranks that include the famous Milford, Routeburn and Tongariro tracks.

It opened in March, closing three weeks later due to COVID-19, and remained closed for the winter before reopening in October.

The trail weaves through the ranges for its 55 kilometres, offering views down onto the remote West Coast, back from the town of Greymouth.

En route to Smoke-ho, the quaintly named location at the southern start of the three-day walk, you pass through the village of Blackball, which has an eclectic mix of businesses and buildings.

In the Smoke-ho carpark, it rained steadily as we pulled on waterproofs beneath the trailhead sign.

The first part of the Paparoa follows the Croesus Track, an old miner’s track that – repaired and newly bridged –  has stood the onslaught of time remarkably well. The trail soon climbed steadily through dripping beech and podocarp forest.

After nine kilometres, we popped above the tree line and arrived at Ces Clark Hut just in time to beat the worst of the weather. Wind and rain knocked on the windows as we sheltered for lunch.

The forecast was for increasing gales and we were about to cross the highest, most exposed part of the trail. Our booking that night was for the 20-bunk Moonlight Tops Hut, 10 kilometres further on, and we were keen to get there.

With hoods on and heads down we started out. Conditions worsened and we were drenched and wind-blasted – although very happy – when we arrived at the hut in the late afternoon.

Purpose built for the Paparoa, the hut offers shared bedrooms with spacious living and kitchen areas, and water, but no showers.

On our stay, 20 trampers jostled to position wet gloves, thermals, waterproofs, even a dripping sports bra, around the fire like a damp game of chess.

But at dawn, the sun sent shafts of light across the mountains and we could finally appreciate the setting. Wispy cloud hung in the valleys, but the main rocky escarpment was picked out in the light.

From the hut, the trail dropped into the embrace of the most enchanted mossy forests, before we emerged onto the escarpment, hugging its edge for some distance.

After a brew and lunch, facing out to the Tasman, we strode down off the escarpment, threading through steep, cliff-lined country to Pororari Hut and our second night.

It was enjoyable to sit outside and take in spectacular mountain views and a sunset over the ocean. Hillary, the hut warden, shared a mug of red with us and a handful of voracious West Coast sandflies did little to spoil the moment.

The final day on the track took us off the ridge, through fabulous fern country, down to the Pororari River and a swing bridge crossing. Following the river, at times hugging the walls of a gorge, the trail was now deep in limestone country.

Soon we hit the junction where the Paparoa splits for its final kilometres. Those on bikes head out to the Punakaiki River. On foot, you continue down the spectacular Pororari River Gorge.

Here, huge cliffs step down into verdant vegetation and the river itself. It was a fitting finale to a fine walk. It did feel right though, to continue just beyond the official trailhead for a couple of hundred metres to finish on a wild West Coast beach.

The Paparoa was the last overnight walk I was able to do before so much of the world shut down. It is another fine addition to the quiver of must-do Kiwi trails.

Need to know: You must carry a sleeping bag and all your food and utensils. Gas stoves are provided.

New Zealand’s Paparoa Track: Scenery and serenity on a trail built from tragedy

How to be a better post-pandemic traveller in our wide, brown land of attractions

‘Edge of the world’: The (new) locals’ guide to the best of Australia

Queensland: Beautiful one day, welcoming visitors the next

Western Australia: Explore the best of the west

Who needs Europe? We’ve got Victoria

Where to next? Let’s explore South Australia