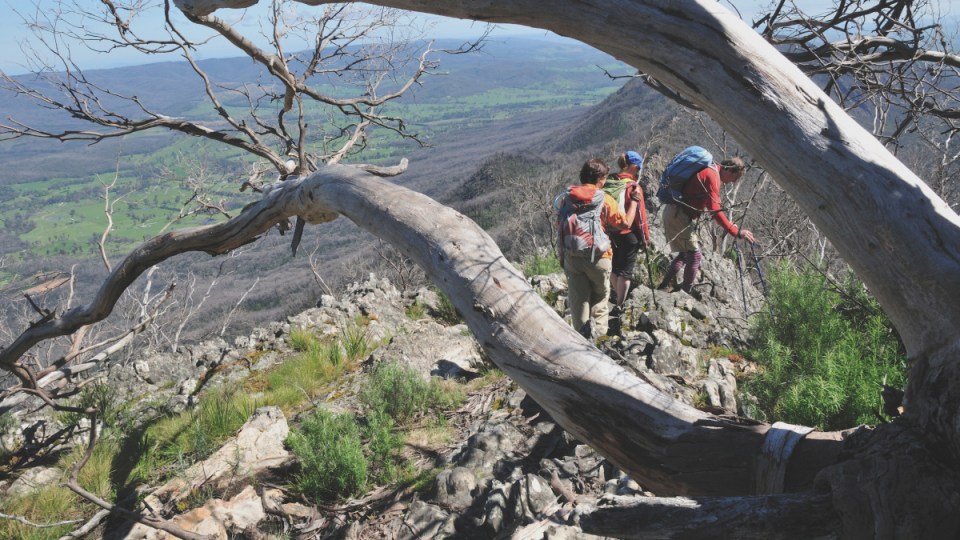 Bushwalking doesn’t have to exercise your credit card as much as it does your body, but it can.

There are plenty of private, guided walking holidays with all the trimmings operating around Australia. But sometimes, going back to basics enhances the experience.

Yes, you’ll have to plan ahead and carry more than a day pack, but spending less on a hike means you can afford to do more of them.

And the rewards are priceless: No air-conditioner oxygen, verdant rainforests and expansive plains, wildflower extravaganzas and an assortment of wildlife.

Social distancing doesn’t get any better than independent bushwalking.

Consider these four (of many) top Australian walks that won’t break the bank.

Each day of hiking (nine to 17 kilometres) leads through savanna and woodlands to a campsite on or near a river, waterfall or lagoon in which you can splash away the afternoon beneath a big NT sky. And with only 15 walkers permitted per day, it feels like you’re the only people on the planet.

After the $9 boat ride across the Katherine River to start the walk and minimal camping fees, your biggest expense is the transfer back to Nitmiluk.

Of course, if you can car shuffle, you’ll have money to spare for a celebratory barra or buff burger at Leliyn kiosk when you come off the track.

Bay of Fires: One day, Tasmania

Named by English navigator Tobias Furneaux in 1773 after he saw Indigenous fires glowing on Tasmania’s north-east shore, the Bay of Fires has more recently become synonymous with a four-day luxury lodge walk.

But it’s possible to explore the signature white beaches and lichen-gilded granite boulders for free.

From the coastal village of Binalong Bay, a short drive north-east of St Helens, head north on foot along gleaming sand, around rocky gulches rocking with tidal flow, past tranquil lagoons where sea eagles fish, and over granite slabs decorated with orange lichen, for as long as you want before backtracking. (There is no drinking water, so take plenty.)

Half a day (11 kilometres) of walking brings you to the Gardens, where a curvaceous bay nestles against massed sculpted granite.

Lady Jane Franklin, the wife of then lieutenant-governor of Van Diemen’s Land, Sir John Franklin, named this exquisite spot for the flowers she saw, so look out for colourful coastal blooms.

For the cost of a working week’s takeaway coffees, you can book a two-night base camp in Cathedral Range State Park for some of Victoria’s best bushwalking.

Strolls along Little River, at the foot of the park’s namesake, suit children and inexperienced hikers but the main attraction is the more challenging walk along the seven-kilometre, stand-alone range’s gnarly spine.

Some eager beavers hike Cathedral Range end to end, camping out (for free) in the ridge-top Farmyard – before the Black Saturday fires this was home to lyrebirds that mimicked animals grazing the plains below – but I recommend doing two day-walks from a riverside camp.

Both the north loop, taking in Little Cathedral and The Cathedral peaks, and the south loop, which scales the vertiginous Sugarloaf and brings you back along the aptly named Ridgeback, are steep, rocky hikes involving leg-testing clambering.

Grandstand views over plains, valleys and the Great Divide reward your efforts.

To book a campsite, go to parkstay.vic.gov.au

Temptation abounds in WA’s Margaret River region, including guided and self-guided accommodated walks on the spectacular stretch of coast between capes Naturaliste and Leeuwin.

But you can hike the six to seven-day, 125-kilometre Cape to Cape Track on a budget.

There are four basic Leeuwin-Naturaliste National Park camping areas (fees apply) on the track and private caravan parks in three coastal towns through which it passes.

Two bus lines operate between Dunsborough and Augusta, from where you’ll need to transfer (taxi or private operator) to/from the cape lighthouses.

The best place to start planning is the Friends of the Cape to Cape Track website.

Important: Check each state’s COVID-19 travel restrictions before booking any travel. For more information from the federal government, check here

How to be a better post-pandemic traveller in our wide, brown land of attractions

‘Edge of the world’: The (new) locals’ guide to the best of Australia

New Zealand’s Paparoa Track: Scenery and serenity on a trail built from tragedy

Queensland: Beautiful one day, welcoming visitors the next

Western Australia: Explore the best of the west

Who needs Europe? We’ve got Victoria

Where to next? Let’s explore South Australia