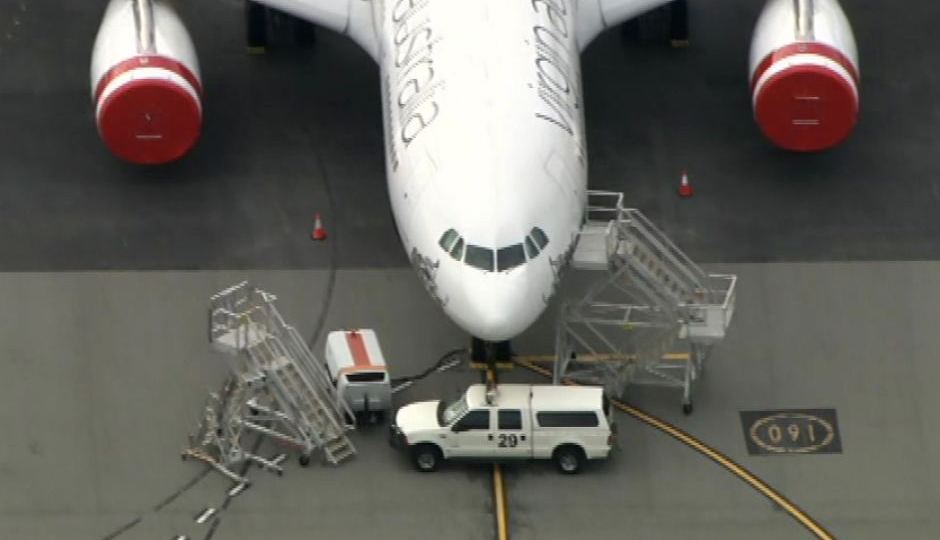 Trucks and other runway items are being used to block Virgin Australia planes at Perth Airport Photo: Twitter

Perth Airport has taken possession of parked Virgin Australia aircraft over unpaid invoices, with the airport saying it must “protect its own interests”.

It is the latest development in Virgin’s potential demise – the biggest collapse so far of an Australian business amid the fallout from the coronavirus pandemic.

Virgin Australia is estimated to owe more than $6.8 billion to its more than 12,000 creditors, Federal Court documents filed by administrators Deloitte on Friday say.

Images obtained by broadcasters show a bulldozer, trucks and portable stairs positioned right in front of the aeroplanes, so that they cannot take off.

“Virgin has significant outstanding invoices from Perth Airport for airfield and terminal use charges – money the airline has already collected from its passengers and the FIFO sector,” an airport spokesperson said on Friday.

“While Perth Airport is working with the Virgin administrators, it also needs to protect its own interests.

“Perth Airport has taken liens over a number of Virgin aircraft – a standard practice in these situations.”

The airport did not specify the value of the dues.

The aircraft had been parked for some time and were not currently being used for flights.

The bankrupt airline is currently flying a skeleton schedule under its regular management team as administrators seek a buyer for the entire operation.

Administrators, Deloitte, are liable to pay leases on its aircraft starting April 28.

They are seeking court orders for an extension of up to four weeks from their appointment to decide if leased planes were required for continuing operations of the business.

Virgin Australia entered voluntary administration on Tuesday as a result of plummeting demand because of flight restrictions.

Rival Qantas slammed Perth Airport’s decision to seize Virgin aircraft as “ridiculous” behaviour and said it was “deeply worrying” for all users of the airport.