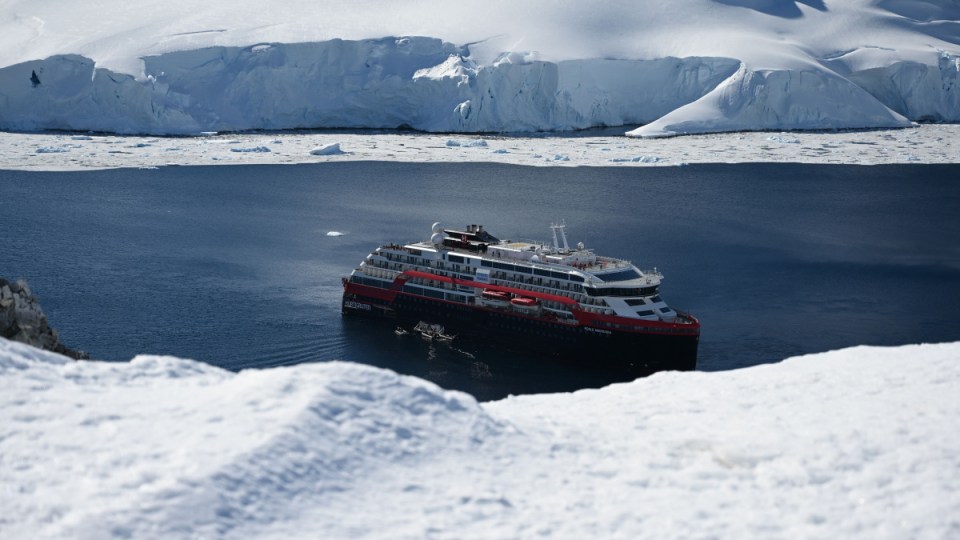 Tourism in Antarctica this season is expected to rise by 40 per cent. Photo: Getty

In January, the Coral Princess, a ship with 2000 berths and a crew of nearly 900, ploughed through the frigid waters off the Antarctic Peninsula.

The cruise, which had been advertised at less than $US4000 ($6000) per person, is remarkably cheaper than most Antarctic expeditions, which often charge guests at least three times that amount for the privilege of visiting one of the wildest parts of the planet.

Visitors to the region, and the ships that carry them, are growing in number: Antarctica, once accessible only to well-funded explorers, is now edging toward the mainstream.

But managing tourism is a tricky issue in this distant region where no individual government has the power to set the rules, and the challenge is becoming more complex as Antarctica’s popularity grows.

During this summer season, which is roughly from November to March, the number of visitors to the region is expected to rise by nearly 40 per cent from the previous season.

Some observers warn that such rapid growth risks visitor safety and also adds pressure to this fragile region, which is already straining under the effects of climate change, commercial fishing for krill, toothfish and other species, and even scientific research.

Human activity in the region falls under the governance of the Antarctic Treaty, which dates to the Cold War era.

But day-to-day management of tourism is regulated by the tour operators, through a voluntary trade association that sets and enforces rules among its members.

Observers agree that this system has worked well since it was set up in the 1990s, but some worry that booming tourist numbers could push the old system to a breaking point.

They say that the consultative parties to the treaty system – governments like those of the United States, France, New Zealand, Argentina and some two dozen others – must act more quickly to manage tourism and protect the region’s value as a wilderness.

“The bottom line for us is that there aren’t a lot of hard rules governing tourism. It’s mostly voluntary,” said Claire Christian, executive director of the Antarctic and Southern Ocean Coalition, a network of more than 15 conservation groups that serves as an observer to the treaty system.

Right now, there is a lot of good will. But that’s not something you can guarantee.”

Tourism in the Antarctic began with a trickle in the 1950s, but the industry remained exclusive and expensive.

Expeditions grew steadily and by the late 1980s, a handful of companies were offering sea- and land-based trips.

In 1991, seven private tour operators came together to form the International Association of Antarctica Tour Operators.

Among other things, the group’s aims were to promote “environmentally safe and responsible travel,” improve collaboration among its members and create – among the operators’ paying clients – a “corps of ambassadors” who could advocate conservation of the Antarctic region after they returned home from their trips.

The number of visitors figures soon began to rise, increasing from roughly 6700 in the 1992-93 season to nearly 15,000 by the end of that decade, according to the tour operators association.

Apart from a dip after the 2008 financial crisis, that number has risen steadily ever since.

The figure for this season is expected to rise to more than 78,500, more than double the total from a decade ago.

The vast majority of visitors come by cruise ship.

Meanwhile, the tour operators association has been gaining an average of two to five operators every year, according to Lisa Kelley, the group’s head of operations.

Its members now include 48 tour operators, as well as five provisional members (Princess Cruises among them) and more than 60 associates – travel agents, marketers and others that work in the industry but don’t run tours.

“At the end of the day, we’re all a bunch of competitors,” said Bob Simpson, vice-president for expedition cruising at the luxury travel company Abercrombie & Kent and a former chairman of the tour operators association’s executive committee.

“But it’s in our best interest to work together and co-operate to ensure this extraordinary place is protected for future generations.”

Mr Simpson said that association had been “remarkably successful” in promoting sustainable travel to the region, noting that, in his view, the education and experiences they offered their guests outweighed the negative impact of the carbon emissions associated with the trip.

Abercrombie & Kent and other association members agree to abide by the organisation’s bylaws and guidelines, as well as the rules set out by the treaty system.

These govern things like the number of passengers allowed ashore during site visits, staff-to-visitor ratios and the amount of experience required of the crew.

The rules also stipulate that vessels – like the Coral Princess – that carry more than 500 people are not allowed to make landings; they can only “cruise” off the coast.

Smaller vessel expeditions – offered by companies such as Abercrombie & Kent, Hurtigruten and Lindblad Expeditions, among others – are allowed to make landings, and their passengers might have the opportunity to disembark with guides to walk, kayak, snowshoe or even camp or ski onshore.

Membership in the tour operators association remains voluntary, although all Antarctic tour operators must obtain a permit to travel in the region from one of the parties to the treaty.

For now, Ms Kelley said, every passenger ship operating in the Antarctic is either a member or provisional member of the association, apart from some private yachts, defined as vessels carrying 12 or fewer passengers.

She is confident that the organisation is ready to accommodate the surge in tourist numbers.

“We’ve really looked at our systems carefully and really worked on trying to make them as robust as we possibly can.”

Other observers are less confident that rising tourist numbers are sustainable.

The risks range from possible damage to sites that tourists visit to the potential growth in non-association tour operators to ensuring visitor safety.

Accidents are rare, but not unheard of.

In November 2007, the MS Explorer, a Liberian-flagged vessel carrying about 100 passengers and 50 crew, cracked its hull on submerged ice, then started to take on water and list severely.

Those aboard evacuated to lifeboats around 2.30am, then floated in the cold for more than three hours before another ship, the cruise liner Nordnorge, rescued them.

No one died or was injured, but that was in part because of the weather.

“Within two hours after the passengers and crew were aboard the Nordnorge, the weather conditions deteriorated with gale-force winds,” according to the official investigative report into the episode, which was conducted by the Liberian Bureau of Maritime Affairs.

“If the Nordnorge’s speed to the scene had been reduced due to rough sea conditions, there may have been fatalities from hypothermia.”

The environment didn’t fare as well.

The MS Explorer slipped beneath the waves carrying more than 208,000 litres of oil, lubricant and fuel; two days later, an oil slick spread over an area of five square kilometres near the site of the wreck.

A Chilean naval ship passed through to try to speed up the dispersal of the fuel, but the report noted the “oil sheen” was still visible more than a year later.

“There have been incidents, but we have always been quite lucky in the sense that maybe the weather conditions were right or there were other ships around,” said Machiel Lamers, an associate professor at the Environmental Policy Group of Wageningen University in the Netherlands.

Scientists warn that the rise in tourism also increases the risk of disrupting the fragile environment.

The introduction of invasive species – non-native crabs or mussels clinging to the hull of a ship, foreign plant seeds stuck in the lining of a tourist’s parka – remains an ever-present threat.

There is also evidence that populations of penguins and other wildlife have been disturbed by human activity in some areas.

At the popular Hannah Point, there have been two reported instances of elephant seals falling off a cliff because of visitor disturbance.

At other sites, structures have been marred by graffiti.

The treaty parties have drawn up “site visitor guidelines” for 42 of the most popular landing sites.

But the tour operators association website lists more than 100 landing sites on the Antarctic Peninsula.

Those with no guidelines in place may become more popular as tour operators try to avoid the crowds.

Pollution from ships is another concern.

Although the International Maritime Organisation’s polar code introduced new measures to control pollution, it still allows ships to dump raw sewage into the ocean if they are more than 12 nautical miles, roughly 22 kilometres, away from the nearest ice shelf or “fast ice,” stationary sea ice attached to the continent or grounded icebergs.

It also fails to regulate discharges of “greywater” runoff from ships’ sinks, showers and laundries that has been shown to contain high levels of fecal coliform as well as other pathogens and pollutants.

Concerns about pollution are perhaps all the more worrying given the arrival of Princess Cruise Lines, which – alongside its parent company Carnival Corp. – has been heavily fined for committing serious environmental crimes in other parts of the world.

“It’s important to understand that all of these impacts – climate change, fishing, tourism – are cumulative,” Cassandra Brooks, an assistant professor in environmental studies at the University of Colorado, wrote in an email.

Given the sheer carbon footprint of Antarctic tourism, and the rapid growth in the industry, these operations will become increasingly difficult to justify.”

Treaty parties are aware that tourism growth will require a new approach.

But it’s not clear what steps they will take, nor how quickly they will act.

In April, the government of the Netherlands hosted an informal meeting to discuss how to manage Antarctic tourism.

The group’s recommendations were presented to the treaty’s Committee for Environmental Protection as well as to the most recent annual meeting of the treaty parties in July.

The discussions seemed to go in the right direction, said Ms Christian, but they are still a long way from implementing major changes.

Whatever policy steps might be on the table, self-regulation in the tourism industry is no longer sufficient, said Ms Brooks, who added that Antarctica is already straining under its many pressures.

The tour operations association, she said in an email, “is truly amazing in what they have accomplished, but it’s difficult to imagine how they will manage to control this burgeoning industry”.

“It’s equally difficult to imagine how more than 78,000 people visiting Antarctica as tourists won’t have a negative impact on the region.”

Tourism in Antarctica: Edging toward the (risky) mainstream