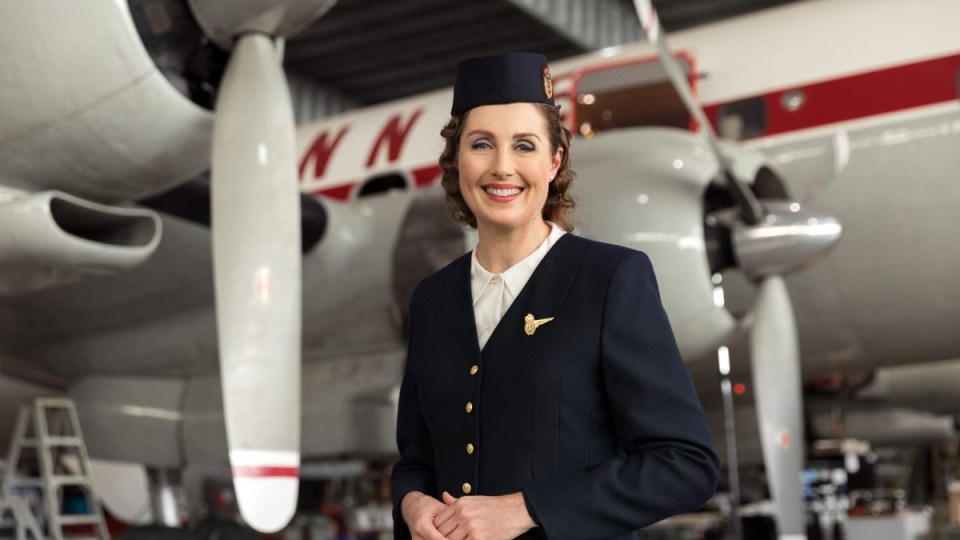 Qantas’s latest in-flight safety video is business in the front, party in the back and all about nostalgia.

The airline debuted the video on Wednesday, as part of its rolling year of centenary celebrations.

It tracks the Flying Kangaroo’s journey from 1920s propeller planes to the business-class smoking lounges of the 1970s, through to mullet-sporting pilots of the 1980s.

And Qantas didn’t do the video halfway.

The airline revealed it took 12 months to produce and a lot of attention to detail.

Before actors (some of them are staff members) were even brought in to begin the three weeks of filming, meticulous research and replication went into creating the sets.

All the cabins are exact replicas – including the 1970s Captain Cook lounge aboard the Boeing 747s of the time.

The recreated lounge in the video features wall panels from a retired 747-200, brought all the way from the Mojave Desert to Sydney.

Qantas then brought onboard an interior design company to replicate the original colours and patterns from the days of old.

Throughout the video there’s other treasures sourced from the archives – a tea set from the 1940s, and one of the only two remaining 1930s life jackets.

Once the sets were ready, the passengers and airline staff had to be just as perfectly recreated.

People were sent to op shops far and wide to scour and search for the perfect attire for each vintage (Vinnies at Longreach was the standout for the 1980s scenes, apparently).

Pilots and stewards were dressed in original uniforms.

While mullets are making a comeback in today’s trends, there were still of bunch of wigs (head and moustaches) required to finish off the looks.

The video starts showing on flights from March 1.

The Qantas centenary exhibition will start touring the country in June.

Announced earlier this year as part of the 100th birthday shindig, the exhibition tells the story of Australia’s national carrier.

It’ll feature artefacts, replicas and interactive installations – highlights include a replica of the Boeing 747’s first-class lounge from the 1970s, as featured in the safety video, and a glimpse inside the findings from the airline’s recent ultra long-haul flights to New York and London.

The exhibit starts on June 27 at Brisbane’s Queensland Museum, where it will run until November 16.

Then it jets off to Sydney, taking up residence at the State Library of NSW from December to April next year; then Scienceworks Museum in Melbourne from June 2021 to August; and finally Perth from December 2021 to February 2022.