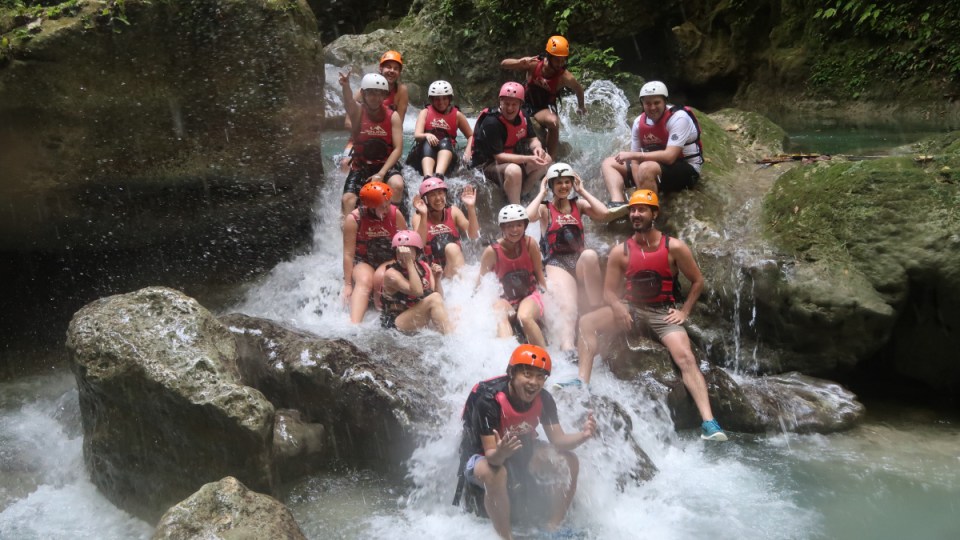 Groups take a break to cool off from the rigours of canyoneering at Cebu’s Kawasan Falls. Photo: Reimark Mendoza

I’m precariously perched 11 metres on a cliff edge, with just a small ledge and tree branch between me and the pool below.

The only problem is, the tour guide advises us to jump clear of the waterfall bubbles so, inadvertently, you’re forced to survey the inviting oasis below.

Not that it is a leap of faith – there’s no shortage of volunteers before me willing to put on a show of bravado for their exhilarating adrenalin rush during canyoneering at Kawasan Falls on the picturesque Philippines island of Cebu.

The biggest issue, which is more a fear of short-term embarrassment and pain, is a poor landing when entering the water.

Just don’t follow the example of the Japanese and Koreans who all seem to lose their nerve just before the edge.

The encouraging guides provide practical advice that is tailored to each individual, gently coaxing any semblance of lethargy from your being.

The first jump is merely to get the blood pumping – an easy two-metre jump to fine-tune the technique before sliding backwards into a pool.

The degree of difficulty gradually increases as the attentive and often amusing crew lend a helping hand between giving their karaoke-honed singing voices a workout and mimicking their monkey and bird calls.

Along the route they even take the time to carefully remove a curious electric spider from the path and transport it well out of harm’s way. It’s all part of the service.

The base station is where the fun starts.

Once you’re fitted for your buoyant life jacket and helmet at Highland Adventures HQ, it’s not long before you’re paired with a motorcyclist who ferries you up the mountainside as a pillion passenger, winding your way past corn fields and the occasional dog grooming itself in the middle of the road.

Unfortunately, the feeling of freedom is over too soon – before one has the chance to master the uniquely Filipino art of reading and texting from the rear seat.

Humidity is probably the biggest challenge encountered on the three-hour adventure, with jumps starting at the lower end of the scale, though negotiating the occasional sharp decline on the basic rainforest paths can present its issues.

After a sweaty 45-minute hike, the immersion into the cool waters is pure bliss amid this lush paradise.

Once there, the wading through shallow pools provides the occasional stumble via an unsure step or unexpected rock, but that’s all part of the getting-back-to-nature vibe.

Rest assured, it’s not easy. But so long as you’re reasonably fit and can handle the occasional misstep, there’s no reason you shouldn’t join in the fun.

For those who find the larger jumps a step too far, there’s often an alternative slippery slide and a viewing point from which to cheer on your colleagues.

There’s even a rope swing to retreat to childhood.

As we near the finale, it’s almost disappointing that the fun has to end.

But your efforts are rewarded in the most spectacular way as you take in the majestic sight of Kawasan Falls, and a final chance for photos to celebrate your achievement.

COST: Based on two people with hotel pick up from Cebu City, Highland Adventures’ Cebu canyoneering Kawasan Falls tour at Badian costs $102, including a lunch.

Canyoneering: Jumping for joy after becoming a rock legend