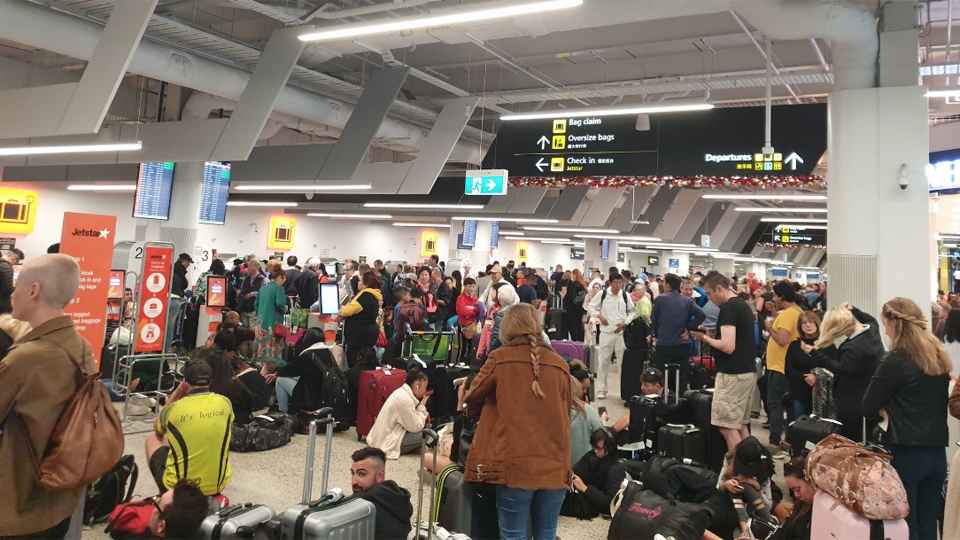 The scene at Jetstar's check-in in Melbourne on Tuesday morning. Photo: Twitter

Jetstar domestic and international flights have been hit by lengthy delays and cancellations across Australia due to an IT outage.

The budget airline was forced to cancel more than 30 domestic and transtasman flights on Tuesday morning after the outage affected its check-in systems.

Dozens more flights were delayed at airports across Australia and New Zealand.

“We know delays are frustrating and we’re really sorry for the impact to customer journeys,” the airline said in travel alert on its website.

“Customers on impacted flights are entitled to a refund or can contact us to change their travel dates at no additional cost.”

Shortly before midday, Jetstar announced it was resuming operations, and systems were coming back online.

The announcement came as angry passengers complained of flights that were hours late early on Tuesday, and a lack of updates from the budget airline.

Passengers in Brisbane, Melbourne and Adelaide were among those to report delays.

6 AM flights from MEL still have not left and several flights have been cancelled; a but more than minor delays.. Manual boarding for the Cairns 6 AM flight now.

Complicating the issue for the Australian carrier was a passport issue that affected New Zealand airports on Tuesday and spread across the Tasman later in the day.

Auckland Airport warned of lengthy delays as airlines were forced to resort to manual processing of passengers’ passports. In Sydney, airport authorities urged passengers to check with their airlines for delays.

Major disruptions at Melbourne airport Jetstar terminal due to an IT issue grounding everyone @3AW693 @10NewsFirst @9NewsAUS @7NewsAustralia @smh @theheraldsun @abcmelbourne no word on when the IT issue will be fixed pic.twitter.com/ehjkktttYC

Both groups of workers have opted for industrial action after talks about new workplace agreements broke down.

Ground crews and baggage handlers – represented by the Transport Workers Union – want better employment conditions, including a guaranteed 30 guaranteed hours of work a week and increases in current wages.

The pilots, represented by the Australian Federation of Air Pilots, are also calling for better pay and conditions. They claim Jetstar pilots are the lowest paid in Australia.

This Friday Jetstar baggage handlers and ramp workers will hold two 2-hour work stoppages. Their fight is about making their jobs safe and fair and ending the struggles their families face. More: https://t.co/R5LEXUm3iH pic.twitter.com/9TXV0fXGgS

Jetstar has rejected what it called the pilots’ “strong arm tactics”.

“It is deeply disappointing that the Australian Federation of Air Pilots is threatening to disrupt the holiday plans of tens of thousands of Australians at the busiest travel time of the year,” it said in a statement.

The airline said the AFAP was demanding the equivalent of a 15 per cent pay increase in the first year. It had offered a 3 per cent annual increase.

“Strong arm tactics from the AFAP will not change our position on this,” it said.

Jetstar also said the TWU had provided a full list of workers’ claims only two weeks before seeking to take strike action. It said it had also offered those workers a 3 per cent wage increase.

“It’s important to understand less than half our total ground crew voted to take action,” the airline said.

“The impact of any potential industrial action by members of the TWU is likely to be minimal as we have strong contingency plans in place.”

Jetstar flights cancelled, delayed due to IT outage