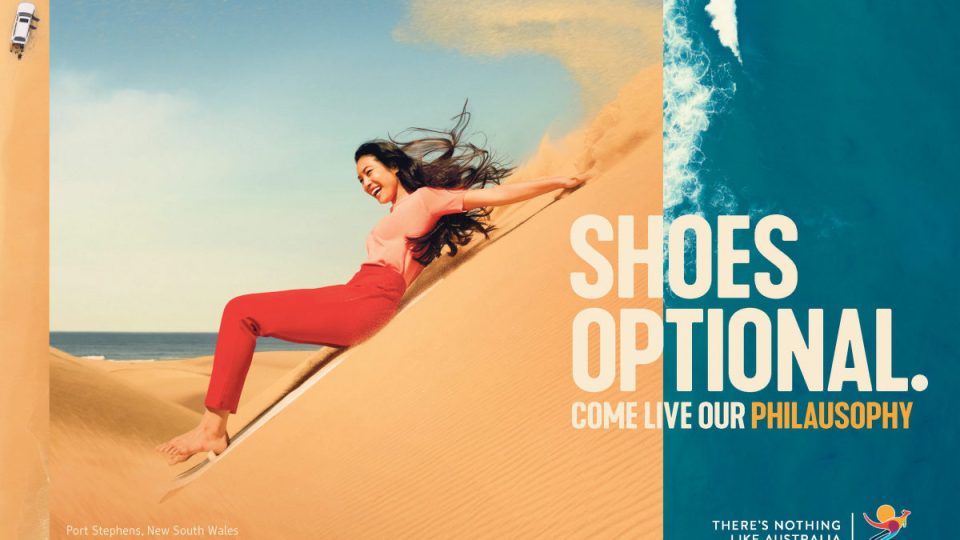 From Paul Hogan’s “Shrimp on the barbie” to Lara Bingle’s “Where the bloody hell are you?,” Australia has a history of using memorable, and sometimes controversial, slogans to capture the attention of international tourists.

Tourism Australia this week unveiled its latest bid to lure overseas visitors to our shores, but the reaction to the tagline has been mixed.

The $38 million dollar advertising campaign banks on the power of puns, hinging on the slogan ‘Come live our Philausophy’.

“A deliberately Australian play on words, Philausophy aims to capture the philosophy of Australians and their informal approach to living, which research shows is highly appealing amongst visitors,” Tourism Australia said.

It replaces the longstanding ‘There’s Nothing Like Australia’ which has been in use for the past decade, one incarnation of which featured actor Chris Hemsworth.

The shake up is part of “a deliberate move to elevate the strengths of our people, our personality and our way of life,” Tourism Australia says.

“In a cluttered market, TA needs to find a distinct selling point that sets us apart from our competitors, and that is what we believe the Philausophy campaign will do.”

According to Tourism Australia it is “the unique nature of Australia and Australians that sets us apart from other destination”.

The campaign will be rolled out in 15 key international tourism markets over the next three years.

“Our $143 billion tourism industry is such a vital part of our economy and in order to grow the industry further and create more tourism jobs, we need to find new ways to sell Australia and differentiate ourselves,” Federal tourism minister Simon Birmingham said.

“In such a competitive global market, the sell is tougher than ever.”

Curtin University Professor of Tourism Kirsten Holmes said that Australia’s status as a “long-haul destination” for travellers from North America and Europe poses a challenge for the tourism industry.

“It’s a big deal to get people out here,”  Professor Holmes said.

It is difficult because tourists could choose to go anywhere.”

The Philausophy campaign is “very much about selling the uniqueness of Australia and the Australian way of life”, Professor Holmes said.

“We want Australia to seem unique enough to want to come here but not too different that it’s uncomfortable, and that’s really something they’re trying to capture in the campaign.”

However, the campaign’s slogan also has the potential to highlight some of the nation’s less sunny aspects.

“People [on Twitter] are talking about whether our ‘philausophy’ encompasses our attitude towards asylum seekers or climate change,” Professor Holmes said.

“Clearly a campaign is designed to sell, it’s not designed to bring up the negative side.

“How far that progresses from a Twitter conversation to having an impact is hard to tell.”

Getting a campaign’s slogan right is “absolutely critical. It can make or break a campaign”, University of Queensland tourism researcher Pierre Benckendorff said.

He pointed to New Zealand’s “100% Pure New Zealand” slogan, which has been extraordinarily successful since it first debuted in 1999.

“Your attention immediately goes to the tagline and I wonder whether they’re being a bit too clever…and why they didn’t just change the ‘s’ in philosophy to ‘z’ and have ‘PhilOZophy’,” he said.

Despite being intended for international audiences, the slogan risks getting lost in translation.

“I’m not sure how well that play on words will translate into the Japanese and Chinese markets,” Dr Benckendorff said.

“So that part of the campaign I have some question marks around.”

I am studying to be an English teacher. I have an English degree. English is my first language. I find ‘philAUSophy’ thoroughly confusing. Who is Phil? I can’t imagine what potential Chinese, Indian & Indonesian tourists will make of it. https://t.co/KIrm4Zgp2C

The campaign focuses on Australia’s people rather than just its places, harkening back to the famous Paul Hogan ‘Come Say G’Day’ campaign of the 1980s.

“They’re trying to shift the focus away from destination attributes like beaches and rainforests and outback to the people of Australia,” Dr Benckendorff said.

“That’s really where they started back in the ‘80s with Paul Hogan. The reason the Paul Hogan campaigns were so successful is that they built the whole brand around Paul Hogan as this laid-back Aussie larrikin.”

The formula remains a successful one, particularly in the United States, he said.

“That’s why they backed it up two years at the Super Bowl with the Dundee campaign. So I think the strategy behind it is good.”

While commenters on social media were quick to deride the campaign, Dr Benckendorff said it is “important to appreciate that we’re not the target market for these ads”.

“Australians tend to have a bit of cultural cringe, we see these ads and we’re usually quite critical of them,”  he said.

“But they’re not aimed at us, they’re aimed at other markets.”