Why more parents are travelling solo – but taking the kids

Travelling as a solo parent with a plus one (or more) kids is a growing trend. Single-parent families are a fact of life – but just because you’re single doesn’t mean you can’t have a holiday.

It’s not only single parents though. “Solo parents” (parents travelling with their children but without their partner), are adding to the numbers.

With more couples both working, there are times when one partner can’t get leave. Some parents don’t enjoy travel, sometimes kids don’t have holidays at the same time as each other. Then there’s the desire of a parent to spend quality time with one child.

Ms Squire also believes that, these days, “it’s more acceptable to travel by yourself with kids – you don’t have to stay home just because the whole family can’t go”.

Dyan McKie, the brand manager in Australia for family travel at Intrepid Travel, says she first noticed an uptick in requests for solo parent travelling in 2017. 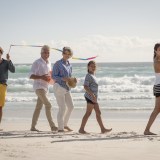 “I did some research and I could see there was real interest with Facebook groups and parent blogs asking what was available for solo parents, but they weren’t really being catered for. It was still mainly about the nuclear family,” she says.

“We put together some solo parent tours and launched in 2018. We started with six trips based on our best-selling family itineraries.”

Intrepid operates in what the industry calls the “adventure space”, so these are not flop-and-drop holidays. There were trips to Egypt, Morocco, Northern India, Costa Rica, Vietnam and Thailand.

“We were looking at destinations that solo parents might feel they couldn’t or wouldn’t tackle by themselves,” Ms McKie says.

Ms Squire agrees that exotic destinations and adventure travel are high on the list.

“Solo parent travellers tend to be interested in group overseas trips – they have the security of a team leader and organisation in a country where there may not be much English spoken,” she says.

“Social interaction for both adults and kids is important.”

Ms McKie took her own five-year-old daughter on a solo parent tour to Morocco.

“It was great to see the kids interacting. Plus, I could have an adult conversation and have time to enjoy the holiday.”

Caroline Berdon, a travel writer and single mother of three, joined an Intrepid tour to Egypt with her nine-year old son.

“The destination was incredible but it was also amazing to travel with like-minded mums,” she says.

“You can have conversations with adults while your child meets other kids. But you can also have one-on-one time with your child away from everyday stuff.”

From 2018 to 2019, bookings for Intrepid’s Solo Parent tours leapt 200 per cent. In 2018 there was just one trip to each destination, but in 2019 there are six solo parent trips to Egypt and more destinations are planned.

Tour operator G Adventures doesn’t have any specific solo parent trips planned, but it has noticed the same sort of growing interest.

“Globally, we’ve seen a 15 per cent year-on-year increase in family tour travellers with one adult and one child,” spokesperson Bella Twomey says.

Helen Rolton, a travel manager with Travel Managers, says she often travels with one or both of her teenage sons, but without her husband. And her husband will travel with their sons without her.

“I took my youngest son to Rotorua [in New Zealand] last year because I thought it would be an adventure but also to share one-on-one time,” she says.

“Family group travel is also great because you get kids meeting other kids and other nationalities. It’s a more enriching experience.”

Given the almost crazy range of activities (dodgem cars, surfing, ziplining) and multiple food choices on many cruise ships, plus kids clubs and potential babysitting, it’s easy to see why cruising could suit solo parents.

Andrea Friend, an agent with Travel Managers who specialises in cruise travel, says ”we definitely get solo parents, usually because of their partner’s work commitments, and cruises can be a really cost-effective way to travel with children”.

“With two kids, you can book one cabin. You pay for two adults and a reduced price for the second child,” she says.

“But then you are not putting your hand in your pocket constantly to pay for things. It’s all included. And there’s so much activity, that you can also get time to yourself.”

“You do need to ensure you book the right cruise, one that has facilities suitable for the age of your children.”

Why you should take the path less travelled
Today's Stories

Why more parents are travelling solo – but taking the kids